Simultaneous spectrophotometric estimation of imipramine hydrochloride and chlordiazepoxide in tablets

A binary mixture of imipramine HCl and chlordiazepoxide was determined by three different spectrophotometric methods. The first method involved determination of imipramine HCl and chlordiazepoxide using the simultaneous equations and the second method involved absorbance ratio method. Imipramine has absorbance maxima at 251 nm, chlordiazepoxide has absorbance maxima at 264.5 nm and isoabsorptive point is at 220 nm in methanol. Linearity was obtained in the concentration ranges of 1-25 and 1-10 μg/ml for Imipramine HCL and Chlordiazepoxide, respectively. The third method involved determination of these two drugs using the first-derivative spectrophotometric technique at 219 and 231.5 nm over the concentration ranges of 1-20 and 2-24 μg/ml with mean accuracies 99.46±0.78 and 101.43±1.20%, respectively. These methods were successively applied to pharmaceutical formulations because no interferences from the tablet excipients were found. The suitability of these methods for the quantitative determination of the compounds was proved by validation.

IMI and CLR stock solutions (0.5 mg/ml, each) were prepared by weighing accurately 50 mg each powder into 2 separate 100 ml volumetric flasks, 50 ml methanol was added, shaken for a few minutes and diluted to volume with methanol. These stock solutions (2 ml) were transferred into 2 separate 10 ml measuring flasks and diluted to the mark with methanol to a final concentration of 100 μg/ml each.

For the simultaneous equation method, working standard solutions having concentrations 1, 5, 10, 15, 20 and 25 μg/ml for IMI and 1, 2, 4, 6, 8 and 10 μg/ml for CLR were prepared in methanol using the stock solutions. Working standard solutions were scanned in the entire UV range of 200-400 nm to determine the λ-max of both drugs. The λ-max of IMI and CLR were found to be 251 nm and 264.5 nm, respectively. The absorbances of the working standard solutions were measured at 251 nm and 264.5 nm and calibration curves were plotted at these wavelengths. The absorptivity coefficients of these two drugs were determined using calibration curve equations.

For Q-absorbance ratio method uses the ratio of absorbances at two-selected wavelengths one at isoabsorptive point and other being the λ-max of one of the two components. From the overlay spectra of two drugs, it was evident that IMI and CLR show an isoabsorptive point at 220 nm. The second wavelength used was 264.5 nm, which is the λ-max of CLR. Working standard solutions having concentration 1, 5, 10, 15, 20 and 25 μg/ml for IMI and 1, 2, 4, 6, 8 and 10 μg/ml for CLR were prepared in methanol using stock solutions and the absorbances at 220 nm (isoabsorptive point) and 264.5 nm, (λ-max of CLR) were measured and absorptivity coefficients were calculated using calibration curve.

Powder from the mixed contents of 20 tablets, equivalent to 25 mg IMI and 10 mg CLR, was transferred accurately to a 50 ml volumetric flask and diluted to volume with methanol. The solution was diluted to the same concentrations of working standard solutions and treated according to the linearity for the different spectrophotometric methods. 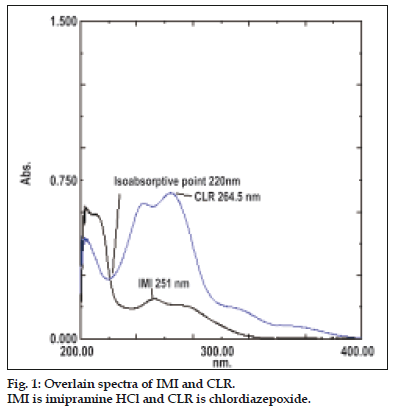 Fig. 1: Overlain spectra of IMI and CLR. IMI is imipramine HCl and CLR is chlordiazepoxide. 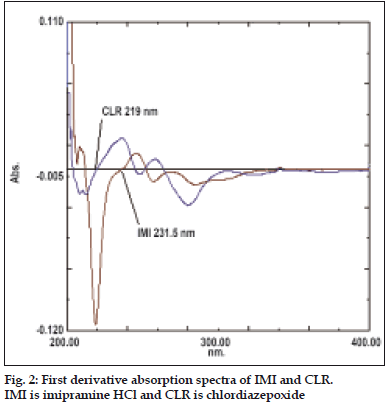 The validity of the suggested procedures was further assessed by applying the standard addition techniques (Table 1). The proposed methods have been applied to assay IMI and CLR in tablets without any interference from the additdives (Table 2). The results of assay validation of the proposed methods show that they are accurate and precise according to the RSD values of intraday and interday determinations (Table 3).

an is the number of determinations, bSD is standard deviation, IMI is imipramine HCl and CLR is chlordiazepoxide

Table 1: Application Of The Standard Addition Technique To The Analysis Of Imi And Clr In Tablets By The Proposed Methods

an is the number of determinations, b SD is standard deviation, IMI is imipramine HCl and CLR is chlordiazepoxide

Table 3: Summary Of Validation Parameters For The Proposed Methods

These methods were compared by applying the analysis of variance (ANOVA) test. The calculated F-value of 7.25 for IMI and 0.92 for CLR are less than the tabulated F-value (9.55) at the 95% confidence interval, which reveals that there is no significant difference with respect to accuracy and precision between the proposed methods. The proposed procedures can be applied for the simultaneous determination of IMI and CLR. Moreover, the methods are rapid, accurate, precise and can be used for routine analysis. 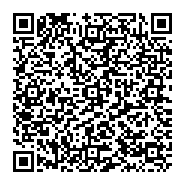