Simultaneous spectrophotometric estimation of valdecoxib and paracetamol in tablet formulations

A simple, accurate, economical, and reproducible method for simultaneous estimation of valdecoxib and paracetamol in two-component tablet formulation has been developed. The method of analysis is derivative spectroscopy to eliminate spectral interference by measuring absorbances at two wavelengths 284 nm and 301 nm for valdecoxib and paracetamol respectively. The results obtained in triplicate were validated statistically and by recovery studies.

Valdecoxib [1] (VAL), 4-(5-methyl-3-phenyl-4-isooxazoyl) benzene sulphonamide) has analgesic and anti-inflammatory activity. Extensive literature survey revealed its estimation by high performance liquid chromatography method [2-3] only. Paracetamol [4] (PCM), 4-hydoxy acetanilide, has analgesic and antipyretic activity. Reported methods of analysis involve spectrophotometric methods [5-7], chromatographic methods [8-10], titrimetric11 and electrochemical methods [12]. The analysis of this combination is of prime importance since valdecoxib is present in a small quantity relative to paracetamol. Therefore, development of simultaneous spectrophotometric method for estimation of both drugs in tablet formulation is a worthwhile objective. The drug combination of PCM and VAL is indicated for symptomatic relief of rheumatoid arthritis and in the treatment of dysmenorrhoea. The present work is a simple, rapid, and economical method for the simultaneous estimation of VAL and PCM in two-component tablet formulation.

A Shimadzu UV spectrophotometer 160A model with spectral bandwidth of 3 nm and wavelength accuracy of ±0.5 nm was used. Ten mm matched quartz cells were employed for this work. Methanol (AR grade) was used as solvent. VAL and PCM were obtained as gift samples from Torrent Research Center, Gandhinagar; and Ranbaxy Laboratories, Dewas, respectively. The commercial formulations of VAL and PCM are available in ratio of 1:25 {Valeron Plus (20/500 mg) [Formulation A]} and 1:32.5 {Validay Plus (10/325 mg) [Formulation B]}, respectively as tablets. 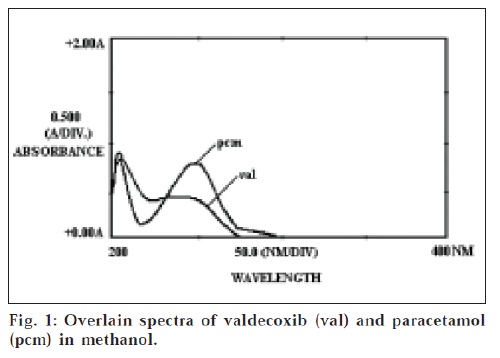 Tablet powder equivalent to 25/32.5 mg of PCM was weighed in case of Formulation A/B, respectively and was dissolved in about 25 ml of methanol, stirred for 30 min, and final volume was made up to 50 ml with methanol. The solution was filtered through Whatman filter paper No. 41, and the first few ml were rejected. 19.2/25.2 ml of standard solution of VAL (25 μg/ml) was added to 1 ml of filtered solution in case of Formulation A/B, respectively. To make the solution of equal concentrations for both the drugs, final volume was made up to the mark (50 ml) with methanol. 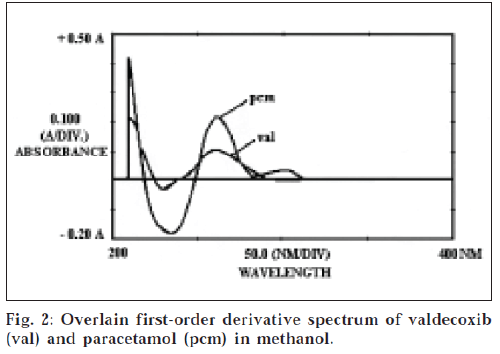 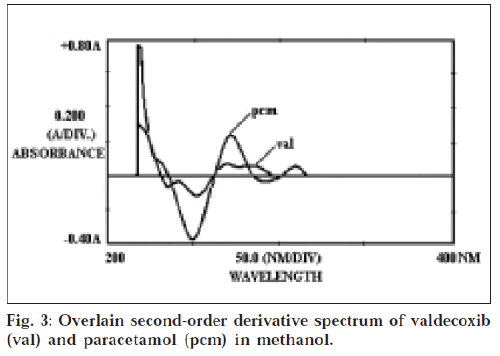 Sample solutions of appropriate dilution were prepared and scanned. Absorbances of these solutions at 284 nm and 301 nm were noted after derivatization in first and second order. The concentrations of both components were computed using Eqns. 1 and 2. Analysis data of tablet formulations are reported in Table 1.

Table 1: Statistical Analysis Of Results For Valdecoxib And Paracetamol In Tablet Formulations

Table 2: Results Of Recovery Studies For Valdecoxib And Paracetamol In Tablet Formulations

The method is used to eliminate the spectral interference from one of the two drugs while estimating the other drug by selecting the zero-order crossing point on the derivative spectra of each drug at the selected wavelengths.

It is concluded that the proposed method is simple, accurate, and can be successfully employed for simultaneous estimation of valdecoxib and paracetamol in two-component tablet formulations.

The authors thank the Torrent Research Center, Gandhinagar; and Ranbaxy Laboratories Limited, Dewas (MP), for providing gift samples of the drugs. The authors are also thankful to Mr. A. K. Gupta, Research Scholar, CSIR, Department of Pharmacy, Shri G. S. Institute of Technology and Science, Indore, for his invaluable help to carry out this work.