Simultaneous Voltammetric Determination of Nitazoxanide and Ofloxacin in Pharmaceutical Formulation

Nitazoxanide is chemically N-(5-nitro-2-thiazoyal) salicylamide acetate) [1-4]. It is used as an antiprotazoal, antihelmenthic, in giardiasis and cryptosporidiosis, in immune-compromised patients, including those with HIV infection [2-4]. It is not official in any pharmacopoeia. Analytical methods reported for quantitative determination of nitazoxanide are spectrophotometric method [5], RP-HPLC method [6,7] and stability indicating RP-LC method [8].

Ofloxacin is chemically (±)-9-flouro-2,3-dihydro- 3-methyl-10-(4-methyl-1-piperazinyl)-7-oxo-7-Hpyridal( 1,2,3de-)-1,4-benzoxazine-6-carboxylicacid and belongs to fluoroquinolone group of antimicrobial agents [2,9]. It is used in chlamydia or chlamydophila infection including nongonococcal urethritis. Ofloxacin is official in BP [10], USP [11], and EP [12]. The assay procedures mentioned in these pharmacopoeias are nonaqueous titration. Reported methods for quantitative determination of ofloxacin in pharmaceutical formulation or biological fluids are differential pulse polarography [13], square wave voltammetry [14], capillary electrophoresis [15], cyclic voltammetry, linear sweep voltammetry and electrochemical impendence spectroscopy [16], spectrophotometry [17] and HPLC [18-20]. Capillary electrophoresis [21], LC with fluorescence detection [22] and fluorimetry [23] are also reported for determination of ofloxacin enantiomers. Stability studies of ofloxacin are also reported [24]. Reported methods for simultaneous determination of nitazoxanide and ofloxacin are simultaneous equation method [25,26] and RP-HPLC method [27,28]. LOQ data is not available for simultaneous equation method but the RP-HPLC method reported LOQ as 0.43 μg/ml and 1.8 μg/ml for nitazoxanide and ofloxacin, respectively. Hence attempts were made to develop more sensitive and selective method for simultaneous determination of nitazoxanide and ofloxacin in bulk drug and pharmaceutical formulation.

All the reagents used were of AR grade. Pure drug samples of ofloxacin and nitazoxanide were kindly gifted by Alembic Pharmaceutical Limited (Vadodara, Gujrat, India) India. The gift samples were used as standards without further purification. Formulation Zenflox NT was purchased from local market.

Twenty tablets were accurately weighed and powdered in a mortar. An amount equivalent to one tablet (containing 200 mg of ofloxacin and 500 mg nitazoxanide) was taken in 50 ml volumetric flask and dissolved in 50 ml methanol by sonicating it for five minutes. Then the solution was filtered through Whatman filter paper No. 40 to the 100 ml volumetric flask and volume was made up to the mark with methanol. The sample solution thus prepared was diluted with methanol to get the solution containing 25:62.5 μg/ml ofloxacin:nitazoxanide.

After optimizing all the experimental parameters, standard addition method was used for polarographic determination of ofloxacin and nitazoxanide at pH- 8.36. For this, 15 ml of supporting electrolyte Britton- Robinson buffer of pH-8.36 was taken in sample cell, purged for 300 s with N2 gas and the polarogram was recorded in the voltage range of -0.05 mV to -1.45 mV for blank measurement in DPP mode. Then appropriate amount of binary mixture solution was added to the same sample cell containing 15ml of supporting electrolyte Britton-Robinson buffer of pH-8.36 and scanned in the same range in DPP mode. In same manner five readings were obtained with two replications. Validation parameters like precision, accuracy, LOQ and robustness were studied as per ICH guidelines [29].

Figure 1: Chemical structures of (a) nitazoxanide and (b) Ofloxacin

The experimental result shows that the peaks were not obtained for both the compounds in case of ammoniaammonium chloride of pH-8 and disodium hydrogen phosphate-potassium dihydrogen phosphate of pH-8 while in other cases cathodic reduction peaks for both the compounds were obtained. However, peaks were more sensitive and clear in case of Britton-Robinson buffer of pH-8.36 (fig. 3). 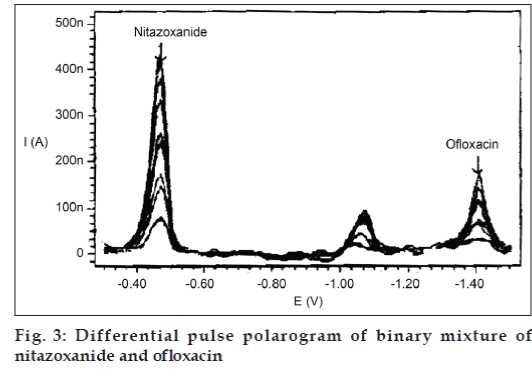 Interday and intraday precision for Differential Pulse Polarography method was measured in terms of % RSD. The experiment (preparation of calibration curve) was repeated five times in a day for intra-day and on five different days for inter-day precision (Table 2).

The robustness of the method was determined by using different solvents for the preparation of stock solution of standard drug. The drug stock solution was prepared in methanol and 0.1M methanolic NaOH. The average value of %RSD of the responses for determination of ofloxacin and nitazoxanide were less than 2% reveals the robustness of the method.

nd results were found to be in good agreement with the label claim (Table 3).

The obtained results show that the proposed DPP method is simple, accurate, precise as well as sensitive and can be used for the quantitative determination of ofloxacin and nitazoxanide alone or in mixture without any prior separation of individual drug. The method was found to be more sensitive than the HPLC method reported for the simultaneous estimation of nitazoxanide and ofloxacin. The value of %RSD for intraday and interday precision was found less than 2. This value confirms that method is precise. The value of % recovery greater than 98% for this method shows that the method is accurate and free from the interference of excipients used in formulation.

The authors are thankful to Alembic Pharmaceutical Limited (Vadodara, Gujarat, India) for supplying gift samples of nitazoxanide and ofloxacin.