I. Singhvi* and Neela Bhatia1

Developed spectrophotometric and HPLC methods are simultaneous methods of analysis of pseudoephedrine hydrochloride and loratadine from combined tablet dosage form. The developed methods were found to be simple, rapid, accurate, reproducible and economical. These methods can be used successfully for quality control testing of the drugs from combined tablet dosage form.

Standard bulk drug sample of pseudoephedrine hydrochloride, loratadine and nimesulide were provided by Ranbaxy Laboratories Ltd., Dewas. Tablets of combined dosage form were procured from the local market. All other reagents used were of analytical grade for spectrophotometric methods and of HPLC grade for HPLC method.

Using the overlain spectra of pseudoephedrine hydrochloride and loratadine in 0.2 M HCl, the wavelength maxima of both drugs, i.e., 257.0 and 283.0 nm, were selected as two sampling wavelengths for this method. Seven mixed standards of two drugs in 0.2 M HCl were prepared so as to contain 0-600 μg/ml of pseudoephedrine hydrochloride and 0-25 μg/ml of loratadine. All mixed standard solutions were scanned over the range of 400 nm to 220 nm in multicomponent mode of spectrophotometer using 257.0 nm and 283.0 nm as two sampling wavelengths. The spectral data from these scan were used to determine the concentration of two drugs in the sample solution.

The sample solution was scanned over the range of 400 nm to 220 nm in multicomponent mode and concentration of each component was estimated by analysis of spectral data of sample solution with respect to that of mixed standards by the instrument. Results of analysis are reported in Table 1.

Tablet sample was prepared in similar manner as for Method I. Absorbance of final dilution of sample was recorded at 308.6 nm and 263.0 nm from first derivative spectra of sample and amount of two drugs calculated using respective calibration curve. Results of analysis are reported in Table 1.

HPLC method was developed using Inertsil C18 ODS 3V(5μ) 250 × 4.6 mm column. Mobile phase selected for this method contained 20 parts of ammonium acetate buffer (3.85 g/l) and 80 parts of methanol adjusted to pH 7.5 with sodium hydroxide that was filtered through 0.2 micron membrane filter. Flow rate employed was 1.0 ml/min. Detection of eluent was carried out at 250 nm and AUFS was set at 0.032. Method was developed using nimesulide as internal standard.

Standard stock solutions of pure drugs were made separately in mobile phase containing 2000 μg/ml of pseudoephedrine hydrochloride, 200 μg/ml of loratadine and 100 μg/ml of nimesulide and filtered through a 0.2 micron membrane filter.

Procedure for analysis of formulations

After setting the chromatographic conditions and stabilizing the instrument to obtain a steady baseline, the tablet sample solution was loaded in the 20 μl fixedsample loop of the injection port. The solution was injected and a chromatogram was recorded. The injections were repeated five times and the peak areas were recorded. A representative chromatogram has been given in Fig. 1. The peak area ratios of each of the drugs to the internal standard were calculated and the amount of each drug present per tablet was estimated from the respective calibration curves. The results of analysis are presented in Table 1. 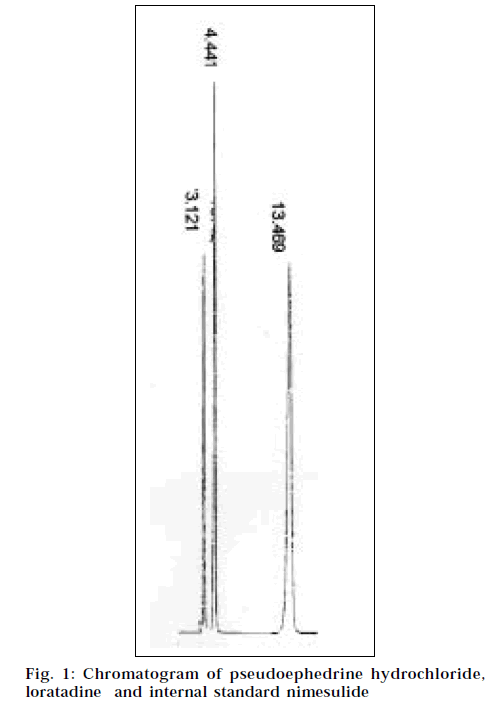 The proposed methods for simultaneous estimation of pseudoephedrine hydrochloride and loratadine in combined tablet dosage form were found to be simple, accurate, rapid and economical. The values of coefficient of variance were satisfactorily low and recovery was close to 100%, indicating reproducibility of the methods.

First method involving multiwavelength spectroscopy is specific to instrument having software for provision of such determination. Selection of proper sampling wavelengths and concentration of components in mixed standard is critical. Since calculations are done by the instrument itself, chances of manual error are nil; furthermore, the method is quite rapid.

Third developed method for simultaneous estimation of two drugs from combined dosage form is reverse phase chromatographic method utilising C18 column and methanol ammonium acetate as mobile phase. Detection of eluent was carried out using UV detector. The method was developed using nimesulide as internal standard. The run time per sample is just 15 min. The excipients in the formulation did not interfere in the accurate estimation of pseudoephedrine hydrochloride and loratadine.

Since none of the methods is reported for simultaneous estimation of pseudoephedrine hydrochloride and loratadine from combined dosage form, these developed methods can be used for routine analysis of two components without prior separation.