The present paper describes two simple, accurate, rapid, precise and economical procedures for simultaneous estimation of chlordiazepoxide and trifluoperazine hydrochloride in combined tablet dosage formulations. The first meth¬od is based on the multicomponent mode of analysis of the instrument used; the second method is developed on simultaneous equations. The Shimadzu 1700 pharmaspec UV/Vis spectrophotometer with a matched pair of 10 mm quartz cells was used for experimental purpose. Both the drugs obeyed Beer's law in the concentration range employed for the analysis. For all these methods 0.1 M HCl was used as a solvent. In this solvent system chlordiazepoxide showed maximum absorbance at a wavelength of 245 nm and trifluoperazine hydrochloride showed maximum absorbance at a wavelength of 255.5 nm. The results of analysis were validated statistically and by recovery studies.

The combinations containing chlordiazepoxide 10 mg and trifluoperazine hydrochloride 1 mg are available in tablet formulations. They are indicated in the treatment of anxiety and increase activity of the inhibitory transmitter GABA in different parts of CNS; they also produce antipsychotic, muscle relaxant and anticonvulsant activity. Chlordiazepoxide (CDZ), 7-chloro-2-(methyl amino)-5-phenyl-3H-1,4-benzodiazepine-4-oxide was the first benzodiazepine to be used clinically with general properties similar to those of diazepam [1] and used in the short-term treatment of anxiety disorders and insomnia.

The methods for quantitative estimation of chlordiazepoxide includes non-aqueous titrimetric [2], liquid chromatography [3-5], spectrophotometric methods [2,6-7] has been reported. Simultaneous determination of chlordiazepoxide from combined dosage forms with other drugs has been reported8-10. Trifluoperazine hydrochloride (TFP), 10-[3-(4-methyl-1-piperazinyl)propyl2- (trifluoromethyl) phenothiazine dihydrochloride is an antipsychotic and antiemetic. TFP is official in USP [11] and IP [12]. Literature survey reveals that spectrophotometric [12-16] and HPLC [17-18] methods have been reported for its determination from pharmaceutical preparations. Several methods for simultaneous estimation have been reported in multi component drug formulations of TFP with other drugs [19-23]. No Spectrophotometric methods are reported in the literature for this combination. The proposed methods are rapid, simple, accurate, reproducible and economical for simultaneous estimation of CDZ and TFP from tablet dosage form.

Standard stock solutions of CDZ and TFP were prepared separately by dissolving 100 mg of each drug in 0.1 M hydrochloric acid solution. Each stock solution was suitably diluted to different concentrations and linearity was studied. Linear relationships were observed in the range 2-50 μg/ml for CDZ and 2-35 μg/ml for TFP. These stock solutions were further diluted to get concentration of 10 μg/ml of each drug using 0.1 M hydrochloric acid solution.

Twenty tablets were weighed and average weight was calculated. For methods 1 and 2, powder equivalent to 10 mg of CDZ and 1 mg of TFP was accurately weighed. The mixture was extracted with 0.1 M HCl, the extract was filtered, and the filtrate was approximately diluted to get final concentration 30 μg /ml of CDZ and 3 μg/ml of TFP. The analysis procedure was repeated five times with tablet formulations available in market. 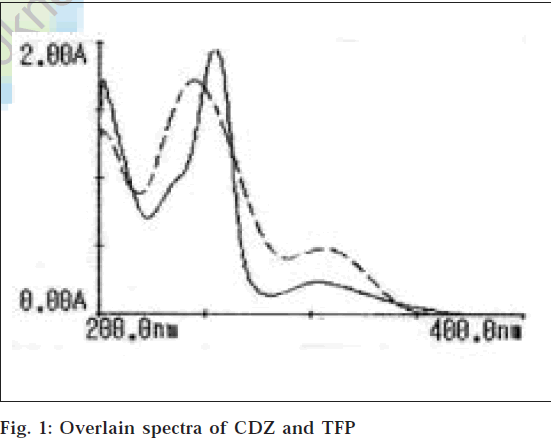 In method 2, simultaneous equations (Vierordt’s method) [25] was applied for determination of both the drugs. Selection of analytical wavelengths was done by taking pure drug samples of CDZ and TFP, which were separately dissolved in 0.1 M HCl to give two solutions of 10 μg /ml. They were scanned in the wavelength range of 400 to 200 nm. Wavelengths 245 and 255.5 nm was selected for the formation of the simultaneous equations. For constructing calibration curves, two series of different concentrations of CDZ and TFP were prepared from the stock solutions.

The proposed multicomponent mode of analysis method is specific for this instrument. It employs a programme for the simultaneous quantification of up to eight components and their mixtures. The main advantage of this method is that there is no need for calibration or manual calculations. The reporting is done by the microprocessor of the instrument. All the methods were found to be economical, as they require only 0.1 M HCl as solvent. The validation and sensitivity parameters of both the method is presented in Table 1. The values of standard deviation, coefficient of variation, standard error were satisfactorily low and recovery lying between 99 to 102% (for CDZ) and 99 to 101% (for TFP), which indicates the accuracy of the methods. The methods employing simultaneous equations are very simple and can be easily applied to routine analysis. The results of analysis of tablet formulations, statistical evaluation and recovery studies are shown in Tables 2 and 3, respectively. The overlain spectrum of CDZ and TFP used for analysis is given in fig. 1.

pmeans Y=mx+C, where ?C? is concentration in ?g/ml and Y is absorbance unit, qmeans five replicate samples, CDZ is chlordiazepoxide and TFP is trifluoperazine hydrochloride; method I is multicomponent mode of analysis and method II is simultaneous equation method.

Table 1: Validation and Sensitivity of the Proposed Method.

*Each reading is an average of six replicates. CDZ is chlordiazepoxide and TFP is trifluoperazine hydrochloride; SD refers to standard deviation, method I is multicomponent mode of analysis and method II is simultaneous equation method.

Table 2: Results of analysis of commercial .

% of recovery =100×(recovered amount/added amount), *Each reading is an average of three replicates. CDZ is chlordiazepoxide and TFP is trifluoperazine hydrochloride; SD refers to standard deviation, method I is multicomponent mode of analysis and method II is simultaneous equation method.

The proposed methods are accurate, precise, economical, rapid, and selective for the simultaneous determination of trifluoperazine hydrochloride and chlordiazepoxide in tablet dosage form. Hence it can be conveniently adopted for the routine quality control analysis in its combined dosage forms.