In the pharmaceutical analysis and formulation development fields it is most often required to increase the aqueous solubility of poorly water-soluble drugs. Most of the newly developed drug molecules are lipophillic in nature and poor solubility is one of the most difficult problems of these drugs. In general, in order for a drug to exert its biologic effect, it must be soluble in and transported by the body fluids, traverse the required biologic membrane barriers, etc. It is well known that drug efficacy can be severely limited by poor aqueous solubility. It is also known that the side effects of some drugs are the result of their poor solubility. The ability to increase aqueous solubility can thus be a valuable aid to increasing efficacy and/ or reducing side effects for certain drugs. Various organic solvents like methanol, chloroform, alcohol, dimethyl formamide, and benzene have been employed for the solubilization of poorly water soluble drugs for spectrophotometric estimations. Drawbacks of organic solvents include higher cost, toxicity, pollution, and error in analysis due to volatility [1-4].

There are various approaches for solubilization of poorly water soluble drugs. Hydrotropy is a solubilization technique in which addition of large amount of a second solute results in an increase in the aqueous solubility of another solute. The hydrotropic agents are defined as non-micelle-forming substances, either liquids or solids, organic or inorganic, capable of solubilizing insoluble compounds. Hydrotropic agents consist generally of two essential parts, an anionic group and a hydrophobic aromatic ring or ring system. The anionic group is obviously involved in bringing about high aqueous solubility, which is a prerequisite for a hydrotropic substance. On the other hand, planarity of the hydrophobic part has been emphasized as an important factor in the mechanism of hydrotropic solubilization [5,6]. Concentrated aqueous solutions of a large number of hydrotropic agents like sodium benzoate, sodium salicylate, urea, sodium ascorbate, niacinamide and sodium citrate have been employed to enhance aqueous solubility of various poorly water-soluble drugs [7-10].

Rosiglitazone maleate (RZM), chemically, (±)-5-{p- [2- (methyl-2-pyridylamino)ethoxy]benzyl}-2,4- thiazolidinedione maleate (1:1) is an oral antidiabetic agent [11], which acts primarily by increasing insulin sensitivity. It is a thiazolidinedione which acts as a selective and potent agonist at the peroxisome proliferator activated receptor g (PPARg) [12,13]. It is official in Indian Pharmacopoeia 2007 where liquid chromatography is the method of assay. Extensive literature survey revealed HPLC, LC-MS-MS methods for estimation of RZM alone or in combination with other drugs which require use of costlier and toxic organic solvents. Further, the drug is poorly water soluble [14-17]. Therefore, the present study was aimed to carry out solubility enhancement study of RZM by using various hydrotropic agents and to develop a simple, safe and cost- effective spectrophotometric method for determination of RZM in bulk drug and its dosage form.

The bulk drug of RZM was obtained from Cadila Healthcare Ltd., Ahmedabad, India. The tablets of RZM were purchased from the local market. All the reagents and chemicals used were of analytical grade. A Perkin Elmer, Double beam UV- Visible Spectrophotometer (Model- Lambda 25) with l cm matched quartz cells was used for the spectral measurements.

The solubility of RZM in distilled water was studied by saturation technique. A quantity equivalent to 5 mg of drug was dissolved in 100 ml of distilled water and the solution was subjected to sonication for 2 h. Various aliquots were pipetted from this solution and diluted to get concentrations ranging from 10-50 μg/ ml. The absorbance of the resulting solutions was measured using UV/Vis spectrophotometer against corresponding blank at 248.6 nm. A standard curve was plotted between concentrations versus absorbance. The maximum solubility of drug in the distilled water was determined from the above standard calibration curve.

Powder equivalent to 100 mg of drug was taken in a 250 ml volumetric flask and dissolved in 150 ml of 6M solution of urea. The solution was sonicated for 4 h and the volume was made up to the mark with urea solution. After filtration through a Whatman filter paper no. 41, the filtrate was divided into two parts i.e. A and B. Part A was kept at room temperature for 48 h to check its chemical stability and precipitation, if any. Part B was diluted with water to obtain a concentration of 25 μg/ml. The resulting solution was scanned in the range of 200-400 nm. From the UV-Visible spectrum of RZM, 251.0 nm (lmax) was selected as the wavelength of determination. A typical UV-Visible spectrum of RZM in the 6M urea solution is shown in the fig. 1. The standard stock solution of RZM was diluted to obtain a concentration range of 5-50 μg/ml and absorbances were measured at selected wavelength. The concentrations of drug against absorbance was plotted to obtain a calibration curve. RZM solution follows Beer-Lambert's law over concentration range of 5-300 μg/ml at selected wavelength, with r2~1. The absorptivity values (A 1%, 1 cm) of drug at selected wavelengths was determined. The concentration of drug in bulk drug solution was determined by substituting the absorbance and absorptivity values in Beer-Lambert Law equation i.e. A=abc. Part A solution was analyzed in the same way as part B solution after 48 h. 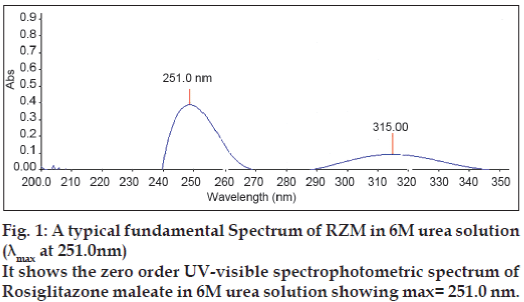 For analysis of the tablet dosage form of RZM, twenty tablet of RZM were weighed and finely powdered. Powder equivalent to 100 mg of RZM was taken in a 250 ml volumetric flask and dissolved in 150 ml of 6M urea solution. The solution was sonicated to solubilize the drug; and the volume was made up to the mark with hydrotropic solution. After filtration through a Whatman filter paper no. 41, the filtrate was divided into two parts A and B. The content of RZM in the tablet was determined in the same way as pure drug.

The recovery studies were carried out at different level of concentration by spiking a known concentration of standard drug to the preanalyzed sample and contents were reanalyzed by proposed methods.

The methods were validated statistically as per ICH/USP guidelines for parameter like accuracy, precision, ruggedness, linearity and range. Accuracy was ascertained on the basis of recovery studies. Precision was studied by analyzing five replicates of sample solution and standard deviation (SD) values were determined. Ruggedness was established by carrying out experiment at various conditions like different time within a day (intraday), different day (interday) and by different analyst. Linearity and range were determined by analyzing drug solution at 80-120% of label claim of the drug.

From Table 1, it is evident that there is good agreement between the amounts estimated, and those claimed by the manufacturers. Percent label claims were very close to 100%, with low values of standard deviation. The recovery study shows accuracy of the method. On observing the validation parameters the method was found to be accurate and precise (Table 2).

*Results are the mean of five determinations

The table gives results of the validation parameters of the method. The results are mean of five determinations. The “a” and “b” indicates brand A and brand B of the tablets of RZM, respectively.

Table 2: Results Of The Validation Study

From this study, it is obvious that there was no interference of urea solution in the estimation of rosiglitazone maleate. Urea is cheaper than most of the organic solvents and can thus substitute expensive methanol, dimethyl formamide, chloroform and carbon tetrachloride. Drawbacks of organic solvents include toxicity, error due to volatility, pollution, and cost. Thus, hydrotropic solutions of urea to solubillized poorly water soluble drug RZM, from tablets to carry out spectrophotometric analysis precluding use of organic solvents. The tablets containing RZM were analyzed successfully.

From the present investigation, it is concluded that the proposed method is new, simple, cost effective, accurate, safe, and precise. Thus, it can be successfully employed in the routine analysis of RZM in bulk drug and its pharmaceutical tablet dosage form.

The authors are thankful to Cadila healthcare, Ahmedabad, India, for providing the gift sample of Rosiglitazone maleate.