A simple extractive spectrophotometric determination of saccharin is described. The method is based on bromination of saccharin to form N-bromo derivative, which on reaction with potassium iodide liberates iodine, imparting yellow colour to the solution. On addition of surfactant cetyl trimethyl ammonium bromide, the intensity of yellow colour increases; it is then extracted in isoamyl alcohol. The absorption maximum was observed at 400 nm, and Beer's law was found to obey over the range 1.5-15 µg of saccharin per 50 ml final solution (0.03-0.3 ppm). The molar absorptivity and Sandell's sensitivity were found to be 4.76 × 10 5 l mol -1 cm -1 and 3.8 × 10 -4 µg cm -2 respectively. The method is sensitive, reproducible and free from interferences of common ions and ingredients commonly present in food products and has been successfully applied in the determination of saccharin in food and pharmaceutical products.

Saccharin (o-benzoic sulfamide) and its salts are white crystalline powders -odourless, and in diluted solution are about 400-500 times sweeter than sucrose [1]. It is one of the widely used artificial sweeteners in some countries. It is extensively used in medicines and in a variety of food products such as canned fruit juices, vegetables, cookies, bakery products, beverages, jams, jellies and salad dressings [2,3]. Saccharin is very sweet in dilute solution but is bitter in concentrated solution [4]. It is used in place of sugar by diabetic patients and dieting persons [5]. The artificial sweetener saccharin is a weak bladder carcinogen and a cause of risk to humans and animals [6]. Various methods for the determination of saccharin have been reported in literature, such as gas chromatography [7], thin layer chromatography [8], HPLC [9], infrared spectrophotometry [10], ultraviolet spectrophotometry [11], flow injection analysis [12], precipitation flow injection method [13], flow-through spectrophotometric sensors [14], etc. A number of spectrophotometric methods for determination of saccharin using common reagents like azur B [15], azur C [16], ferroin [17], ethylene blue [18], phenol-sulphuric acid [19], leucocrystal violet [20] have been reported in literature. Some of these methods need costly equipments, while others are either time consuming or have limitations with respect to sensitivity.

Here a simple extractive spectrophotometric method for the determination of saccharin is proposed. The method is based on the bromination of saccharin to form N-bromo derivative [21], which on reaction with potassium iodide liberates iodine, which imparts yellow colour to the solution. On addition of surfactant cetyl trimethyl ammonium bromide, the intensity of yellow colour increases, which on extraction gives maximum absorbance at 400 nm against reagent blank. The method is simple, sensitive and has been applied for the determination of saccharin in food and pharmaceutical products.

A Systronics Spectrophotometer 106 was used for spectral analysis, and a Systronics pH meter model 331 was used for pH measurement. All chemicals used were of AnalaR grade, and double-distilled water was used throughout the experiment.

To an aliquot of working standard containing 1.5-15 μg of saccharin, 0.5 ml of bromine water was added, and the mixture was shaken gently for 2 min. The excess of bromine was removed by drop-wise addition of formic acid [11], after which 1 ml of potassium iodide was added. The yellow solution obtained was shaken gently for a few seconds, and 1 ml of cetyl trimethyl ammonium bromide was added and shaken well. The solution was made up to 50 ml mark and transferred to a 100 ml separating funnel. The yellow colour was extracted in 2 × 3 ml of isoamyl alcohol, and the absorption was measured at 400 nm against reagent blank.

Samples of different locally manufactured soft drinks were taken and decarbonated by repeated shaking and pouring from one beaker to another. An aliquot (10 ml) of the solution was transferred to a separating funnel. Sulphuric acid (1 ml of 10% solution) was added and the mixture was extracted with 2 × 6 ml of diethyl ether. The lower aqueous layer was discarded. The upper ether layer was extracted with 2 × 2 ml of 2% sodium hydrogen carbonate solution. The ether layer was discarded and aqueous layer was acidified with 2 ml of 5% hydrochloric acid and extracted with 2 × 5 ml of diethyl ether into a conical flask. Ethereal extract was evaporated on a hot water bath. The residue was dissolved in 10 ml of water and transferred completely into a calibrated flask and made up to 25 ml with water [15]. Aliquots were analyzed as described above. Results are shown in Table 1.

Table 1: Determination of Saccharin in Food

One gram of each sample, such as jam, condensed milk and ice creams (locally manufactured), was dissolved in 10 ml of water and deproteinised by adding 25% lead acetate [23]. The reaction mixture was acidified with 2 ml of 5% hydrochloric acid and extracted with 3 × 6 ml of diethyl ether. The ethereal solution was washed with 5 ml water. The ether layer was separated and evaporated on a hot water bath. Residue was dissolved in 10 ml of water and transferred completely into a calibrated flask, and the volume was made up to 25 ml; aliquots were then analyzed as described above [23]. Results are given in Table 1.

Five tablets (Biostar Pharmaceuticals and Boots Piramal) were weighed and finely powdered. The powder was stirred for 2-3 min with 50 ml of deionized water, and 1 ml of 5% EDTA was added. The solution was filtered through Whatman No. 40 filter paper. The insoluble mass was washed with three successive 5 ml portions of water, and the “filtrate plus washing” was diluted to volume in a 250 ml calibrated flask [15]. A known volume was further diluted depending upon the saccharin content. Aliquots were analyzed by the recommended procedure. Results are shown in Table 1.

The optical characteristics such as Beer’s law, molar absorptivity, Sandell’s sensitivity, relative standard deviation and percent range of error were evaluated for the method, and results are summarized in Table 2. The absorption spectrum of the coloured solution is as shown in fig 1. It was found that for maximum absorbance, 0.5 ml of bromine, 1 ml of 1% potassium iodide and 1 ml cetyl trimethyl ammonium bromide were required. A few drops of formic acid were sufficient for removal of excess bromine, and 2 × 3 ml of isoamyl alcohol was sufficient for extraction. It was found that about 2 min were sufficient for bromination, and iodine was liberated immediately on addition of potassium iodide. The most suitable range of pH was found to be 1.5-2.0, which was Publicationsobtained on adding a few drops of formic acid. Reproducibility of the method was checked by six replicate analyses of a solution containing 5 μg per 50 ml saccharin. Interference was studied by investigating the effect of addition of some common foreign species like ascorbic acid, citric acid, tartaric acid, gelatin, sodium bicarbonate, benzoic acid, malic acid, sucrose and glucose to a solution containing 5 μg per 50 ml saccharin. Most of the common species did not interfere in the procedure. 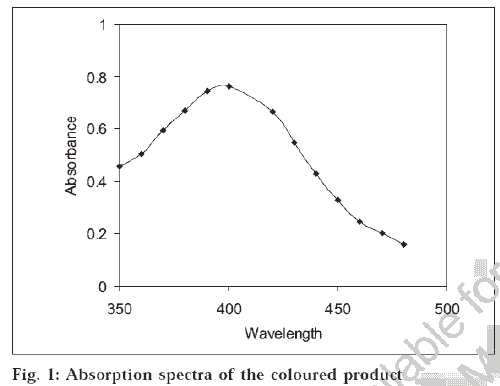 The method has been successfully applied in the determination of saccharin in food products and pharmaceuticals (Table 1). The results of pharmaceutical analysis obtained using the proposed method also agreed with the claimed value on the labels in all instances (Table 1). To check the validity of the method, known amount of saccharin was added to various saccharin-free samples such as icing sugar, fresh apple, orange and grape juice and then amount determined by the proposed as well as reported method19. The recoveries of saccharin added to different samples were found to be 95.8-98.4%, which is in agreement with the results obtained by the established methods, indicating the accuracy of the proposed method. It can be concluded that the proposed method is simple, rapid, sensitive and reproducible, and can be used for routine measurements.