Psychotropic drugs are an important family of compounds from a medical point of view. Their application in therapy requires methods for the determination in pharmaceutical dosage forms and body fluids. Several methods for their analysis have been reported in the literature. Among the methods, spectrophotometric and electrochemical are very useful for the determination of the drugs. Some of the spectrophotometric methods are based on the formation of the binary and ternary compounds with complexes of metals. The formed compounds are sparingly soluble in water, but quantitatively extracted from aqueous phase into organic solvents and the extracts are intensely colored and stable for a few days. These complexes have been employed in pharmaceutical analysis. The electrochemical procedures are very useful in determination of the psychotropic substances in pharmaceutical preparations. 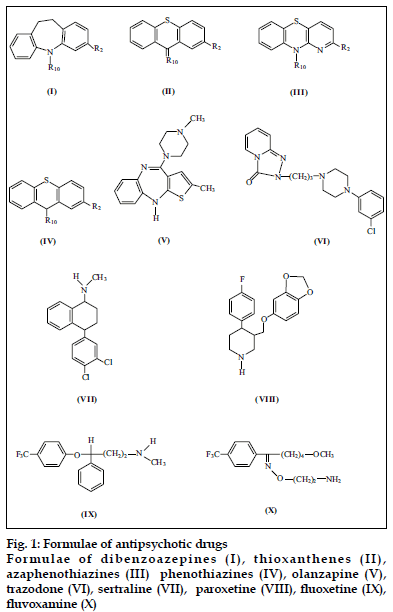 The liability of phenothiazines, thioxantenes and dibenzoazepines to the oxidation in acid medium by K2Cr2O7, NH4VO3, Ce(SO4)2 has been exploited as indicators in various redox titrations [5,7] and as reagents for the spectrophotometric determination of the drugs [8-10].

The new generation psychotropic drugs, e.g., fluoxetine, fluvoxamine and trazodone react with some organic compounds such as chrome azurol S, eriochrome cyanine R, bromophenol blue, methyl orange, bromocresol green and thymol blue to form ion-association compounds [11-16]. These properties have been exploited for the development of spectrophotometric methods for the determination of the psychotropic drugs.

Atypical psychotropic drugs can also easily reduced on mercury electrode [17,18]. Mechanism of electrochemical reactions of these compounds was investigated using different electrochemical methods, e.g. cyclic voltammetry and differential pulse voltammetry [19]. Electrochemical behaviour of these substances can be successfully employed for elaborate simple, rapid and sensitive procedures for the determination of new psychotropic drugs in pharmaceutical preparations and biological fluids.

Significant advantages of the spectrophotometric methods are that they can be applied to the determination of individual components in a multicomponent mixture. This aspect of spectrophotometric analysis is of major interest in pharmacy, since it offers distinct possibilities in the assay of a particular component in a complex dosage formulation. For example in the spectrophotometric method elaborated by Basavaiah [40], the commonly used additives and excipients in the dosage forms of active compounds, such as starch, lactose, glucose, sugar, talc, gelatin, magnesium stearate, sodium lauryl sulphate, sodium sulphite, sodium chloride, calcium chloride, ethanol, formaldehyde and sodium salt of EDTA did not interfere in the analysis.

It has been pointed out in our previous papers [2,4,42] that active substances of psychotropic drugs (PS), which occur in an aqueous solution as large cation, PS·HCl⇄(PS·H)++Cl-, or base, PS+H+⇄(PS·H)+, react with some thiocyanate and halide complexes of metals forming ion-association compounds, (m-n) (PS·H)++ [MeXn](m-n)-⇄(PS·H)(m-n) [MeXn], where, Me denotes metal ion with an n-oxidation state (e.g. Co(II), Cd(II), Hg(II), Pd(II), Fe(III), Cr(III), Ti(IV), Pt(IV), Re(IV), Nb(V), Mo(V), W(V), U(VI)); X- SCN- or halide ion. These compounds exhibit a number of properties very important from the analytical view-point, i.e, a well-defined composition and high molecular weight. They are hardly soluble in water but fairly soluble in acetone, methanol, ethanol. They can be extracted from aqueous phase with chloroform and other organic solvents. The extracts are intensely colored and stable for a few days [2]. These properties have been used for the development of the spectrophotometric methods for the determination of psychotropic drugs.

Structures of binary and ternary complexes of psychotropic drugs 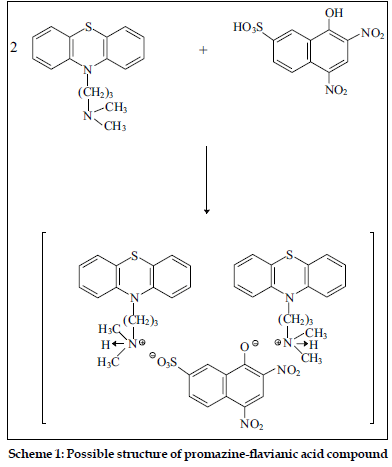 Recently Misiuk [44] studied the ion association compounds of doxepin (DX) with thiocyanate complexes of titanium (IV) and iron (III). The produced compounds were insoluble in water, but well soluble in some organic solvents. They were quantitatively extracted with a mixture of butanolchloroform (2:3) and (1:4) using titanium (IV) and iron (III) thiocyanates, respectively. The mentioned properties were applied for the elaboration of new spectrophotometric methods for the determination of doxepin in DX-Ti-SCN- and DX-Fe-SCN- systems, respectively. The proposed methods have been successfully applied for the determination of the main active ingredient in different dosage forms. The method can also be used for the determination of doxepin in the presence of its degradation product, dibenzo [b,e]oxepin-11-(6H)-one. The dibenzo [b,e] oxepin-11-(6H)–one was examined by TLC, UV and IR techniques. The precision, accuracy and reproducibility of the methods were good and RSD values were low.

It has been found that imipramine and chlorprothixene react with thiocyanate complexes of niobium (V) forming yellow sparingly soluble in water compound in a molar ratio of 1:2 of Nb (V):each drug [43,46]. These compounds can be quantitatively extracted with chloroform-butanol (1:9) or butanol alone. The spectrophotometric methods have been developed for the determination of imipramine and chlorprothixene in the ranges of 0.8-8 ppm and 9-50 ppm, respectively.

Desipramine forms a compound of the ion pair type with thiocyanate complexes of titanium (IV) [54] in acid medium, which can be quantitatively extracted with chloroform. The properties have been used for the spectrophotometric determination of desipramine in the range of 5 - 200 ppm.

Chlorpromazine (CPZ) forms a yellow sparingly soluble in water compound of molar ratio of 1:1 (λmax = 445 nm) with pyrocatechol violet (PCV) in an acid medium [31]. The drug also reacts with tin(IV) ions in the presence of pyrocatechol violet, in aqueous phase at the molar ratio Sn(IV):PCV:CPZ = 1:2:2, and in the organic phase at the ratio 1:2:4 (λmax = 580 nm). These compounds can be quantitatively extracted from aqueous solutions with chloroform-butanol (5:1) or butanol alone. Taking advantage of these properties, the spectrophotometric methods for the determination of chlorpromazine have been developed. The methods proved suitable for assaying chlorpromazine in the range of its concentrations from 3.5 ppm to 35 ppm and from 2 ppm to 20 ppm, respectively. The reaction in the systems chlorpromazine-chrome azurol S [27] and germanium (IV)-pyrocatechol violet-chlorpromazine [53] were applied for CPZ determination in the concentration range 2-20 ppm and 7-70 ppm, respectively.

Fluoxetine and fluvoxamine were determined spectrophotometrically using chrome azurol S and eriochrome cyanine R [12,13]. These dyes react in aqueous media with studied psychotropic drugs forming colored, sparingly soluble in water complexes. These complexes can be quantitatively extracted with chloroform or chloroform-buthanol (3:1). Gindy et al. [11] described the methods for the determination of trazodone in pharmaceutical preparations. The spectrophotometric and spectrofluorimetric methods were based on the formation of yellow ion pair complex between the basic nitrogen of the drug and bromophenol blue. The formed complex was extracted with chloroform and the absorbance was measured at 414 nm. The suggested mechanism of trazodone – bromophenol blue ion pair complex is presented in Scheme 3. 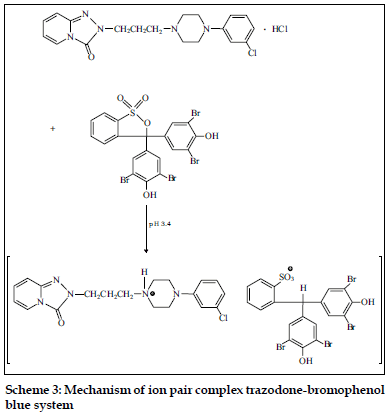 The dibenzoazepines are the most easily oxidized, the first electron is removed from the monomer nitrogen and the radical can then exist in a number of resonance forms. The monocation rapidly dimerises or reacts with an unoxidised molecule. The dimerisation is accompanied by the loss of two protons per dimer. The dimer is more easily oxidized than the monomer [57].

Electrochemical oxidation of some active substances is exploited for using these substances in polarographic and voltammetric analysis. Several electrochemical techniques have been applied for the determination of psychotropic substances in drugs preparations and differential biological samples [58-60]. Oelschlager [59] reviewed the polarographic methods reported for psychotropic drugs including phenothiazine and azaphenothiazine derivatives. Temsamani et al. [61] have analyzed chlorpromazine in plasma by using cyclic voltammetry and modified gold electrode. Chlorpromazine has been determined in urine samples of patients by adsorptive stripping voltammetry in the presence of Triton X-100 [62]. Fluphenazine and trifluoperazine were determined by differential pulse voltammetry after pre-concentration at a wax-impregnated graphite electrode. For plasma, the electrode was covered with a membrane to prevent fouling by proteins [63]. Alternatively, promazine, chlorpromazine and promethazine spiked in urine samples were oxidized by nitrous acid into the corresponding sulphoxides, which were polarographically active. They produce well-defined diffusion-controlled cathodic wave [58].

The dibenzoazepine derivatives, e.g. imipramine, clomipramine and trimipramine were determined in drugs preparations and plasma samples with adsorptive stripping voltammetry [64,65]. Imipramine and desipramine were analysed by cyclic voltammetry at glassy carbon and boron-doped diamond electrode [66]. Wang et al. [67] determined imipramine and trimipramine in urine sample by using cyclic voltammetry and differential pulse voltammetry. Among thioxanthene derivatives, zuclopenthixol was determined quantitatively by measuring the height of voltammetric peaks. The oxidative voltammetric behaviour of zuclopenthixol at a glassy carbon electrode has been studied using cyclic, linear sweep and differential pulse voltammetry [68]. Tuzhi et al. [69] reported an adsorptive pre-concentration method for the voltammetric measurement of trace levels of chlorprothixene. Alternatively, chlorprothixene and thiothixene were determined polarographically through the formation of their bromo-derivatives, which manifest well defined cathodic waves in select supporting electrolytes [70].

Trazodone, which is a triazolopyridine derivative, unlike the tricyclic antidepressants was studied using direct current, differential pulse and alternating current polarography [71]. It was concluded that, only the carbonyl group was involved in the reduction process according to the mechanism given in fig. 2. The proposed method was successfully applied to the determination of the trazodone in pure form and in formulations and the biological fluids (human urine and plasma).

Fig. 2: Mechanism of electroreduction of trazodone

As mentioned previously, the official compendia [93] recommends determination of psychotropic active substances in bulk or in pharmaceutical forms by measurement of the absorbance at selected wavelengths, or titration in a non–aqueous medium with potentiometric or visual indication at the endpoint. The proposed pharmacopoeial procedures require intensive isolation and purification steps in the case of the assay of the studied psychotropic substances in their pharmaceutical dosage forms. The main disadvantage of direct UV spectrophotometry is the sensitivity to excipients usually presented in pharmaceutical formulations.

In the presented review, methods based on the complexation reactions are discussed as alternative methods. The absorbance of colored ion association complexes of psychotropic drugs are less liable to spectral interferences from other ingredients of pharmaceuticals. The reviewed methods offer advantages of their simplicity, rapidity and common access to instrumentation. The analytical methods for the determination of psychotropic drugs are characterized with good precision, sensitivity and reproducibility.

Electrochemical methods have also been used for the study and determination of some psychotropic drugs. Among the methods, mainly used are voltammetry - cyclic voltammetry and differential pulse voltammetry, after pre-concentration of studied substances at several kinds of bare surfaces of electrodes, e.g. glassy carbon electrode, carbon paste electrodes or using different modified electrodes. Procedures have been described in literature for the determination of dibenzoazepines, dibenzocycloheptadienes, thioxanthenes, phenothiazines and new generation psychotropic drugs such as olanzapine, fluoxetine, paroxetine, trazodone, sertraline. Those are projected to be simple, fast and sensitive, which can be applied successfully to determine active substances, their metabolites in pharmaceutical formulations and biological fluids.