7,8,9,10-Tetrahydroazepino[2,1b]quinazolin-12(6H)-one (TAZQ), a synthetic analogue of vasicine, has been reported as anticancer, bronchodilator, antiinflammatory, antitussive, antiarthritic and antiasthamatic compound. This drug candidate is presently in pre-clinical studies for anticancer activity. The development of a validated reverse phase-HPLC (RP-HPLC) method is herein reported for its analysis and stability assessment. The analytical method was optimized using a C-18 column (at ambient temperature) and methanol:water (80:20 v/v) as mobile phase at flow rate of 0.9 ml/min. The eluents were monitored at 254 nm. The retention time of 7,8,9,10-Tetrahydroazepino[2,1b]quinazolin-12(6H)-one was observed to be 3.9 min. It degraded significantly under alkaline conditions whereas negligible degradation was observed under acidic, oxidative, thermal and photolytic stress conditions. The peak of major degradation product, resulting from alkaline degradation, was well resolved from the peak of 7,8,9,10-Tetrahydroazepino[2,1b]quinazolin-12(6H)-one. This method has been found to be linear, accurate, precise, robust, sensitive, specific, suitable and stability indicating.

7,8,9,10-tetrahydroazepino[2,1b]quinazolin-12(6H)- one (TAZQ) (Figure 1), a synthetic analog of vasicine, is currently under preclinical studies for anticancer activity. Vasicine is a major alkaloid obtained from the leaves of Adhatoda vasica Nees, a wellknown medicinal plant used in Ayurvedic and Unani medicine [1]. TAZQ has been extensively studied as bronchodilator [2-7]. It inhibited lung phosphodiesterase activity, lipooxygenase activity, histamine release and antigen-induced mast cell degranulation [8]. It showed synergistic antiasthamatic activity in combination with ambroxol in ovalbumin sensitized guinea pigs [5]. It showed antitussive activity in citric acid cough model in guinea pigs [9]. It’s in vivo metabolic studies were performed in rhesus monkeys and Charles Foster rats. Various metabolites that were detected did not show any bronchodilatory activity [10,11]. TAZQ showed doserelated reduction in developing adjuvant arthritis in rats. It’s LD50 was lower than 1000 mg/kg p.o, thus was safe at pharmacologically active doses [12]. Structure activity relationship of TAZQ as bronchodilator has been studied extensively [7]. It induced nuclear factor kappa-light-chain-enhancer of activated B cell (NF- κB)-mediated apoptosis in human colon carcinoma HCT-116 cell lines [13]. A recent study, showed that its antiproliferative activity is through inhibition of PI3k/ Akt/FoxO3a pathway [14].

Water and methanol of HPLC grade, hydrochloric acid and sodium hydroxide were procured from Loba Chemi Pvt. Ltd., Mumbai, India. Hydrogen peroxide was from Finar, anthranilic acid was from Sigma- Aldrich, caprolactam was from Himedia and thionyl chloride was from Thomas Baker. All chemicals were of analytical grade and were used as received. The proton nuclear magnetic resonance (1H-NMR) and liquid chromatography-mass spectrometry (LC-MS) were carried out at Sophisticated Analytical Instrumentation Facility, Panjab University, Chandigarh, India.

Accurately weighed TAZQ was transferred to volumetric flask and volume was made up with methanol:water (80:20 v/v) to obtain a 100 ppm stock solution. Further dilutions of TAZQ (6.25, 12.5, 25, 50, 100 ppm) were prepared and injected in triplicates to obtain the chromatograms. A calibration curve was constructed by plotting average peak area vs. concentration. Regression equation and correlation coefficient were computed.

The method was validated and tested for system suitability according to International Conference on Harmonization (ICH), United States Food and Drug Administration (USFDA) and United States Pharmacopoeia guidelines (USP). Linearity was determined by computing regression equation and correlation coefficient from calibration curve. For inter-day precision studies, analysis was carried out for three consecutive days at three concentration levels (6.25, 12.5 and 25 ppm), each in triplicate. Analysis was carried out at three different times in a day at three concentration levels (6.25, 12.5 and 25 ppm), each in triplicate, to study intraday precision. Percent relative standard deviations (RSD) of peak areas were calculated. Standard addition method was employed for accuracy studies. Spiking was done at levels of 80, 100 and 120% in previously analysed sample of 25 ppm to measure percent recovery by the assay of known added amounts of analyte. Robustness was measured by making small but deliberate changes in detection wavelength (±5 nm), flow rate (±0.1 ml/ min) and organic content in mobile phase (±2 units). %RSD of peak areas was calculated. The specificity of the method was performed by determining resolution between the peak of analyte and closest eluting peak. Limit of detection (LOD) and limit of quantification (LOQ) were determined using the formulas, LOD=3.3×σ/S and LOD=10×σ/S, where, ‘σ’ is the standard deviation of the response and ‘S’ is the slope of calibration curve. System suitability was evaluated by analysing six replicates of 12.5 ppm TAZQ. Suitability for intended use was tested in terms of %RSD of retention time, %RSD of peak area, tailing factor and number of theoretical plates [16-20].

The stability of TAZQ was studied under stress conditions. For hydrolytic degradation, different strengths of acid (0.1 N, 1 N, 2 N, 5 N HCl), base (0.1 N, 1 N NaOH) and hydrogen peroxide (H2O2) (3%, 6%) were employed. Accurately weighed 50 mg of TAZQ was dissolved in 1 ml of respective acid, base or H2O2 and kept for specified period of time at room temperature. For degradation with 0.1 N HCl, 0.1 N NaOH and 3% H2O2, solutions were refluxed at 80° for 30 min. The volume was made up to 50 ml with methanol:water (80:20 v/v) and 5 ml of this solution was again diluted to get a final concentration of 20 ppm. The stressed samples from acid or base hydrolysis were neutralized (with NaOH or HCl of appropriate strength) prior to injection. Thermal degradation was studied by exposing 10 mg dry powder of TAZQ at 80° in a temperature controlled oven for 4 h. Photolytic degradation was studied by exposing 10 mg dry powder of TAZQ to 365 nm UV light for 4 h in UV chamber. Using methanol:water (80:20 v/v) as solvent, 20 ppm solutions of these stressed samples were prepared, filtered and injected. Analysis was performed by the developed method.

TAZQ was synthesized and the spectral data of synthesized compound matched the literature reports. Chromatographic conditions were optimized to obtain sharp and symmetric peak. The average retention time for TAZQ was 3.921±0.009 min (Figure 2). A calibration curve was plotted by taking 6.25, 12.5, 25, 50 and 100 ppm of TAZQ (Figure 3 and Table 2). Results of validation and system suitability are summed up in Tables 3 and 4, respectively. All the observations complied with the acceptance criteria laid down by regulatory guidelines [19,21-23]. Forced degradation of TAZQ was performed under various stress conditions and stressed samples were analysed by standardized method. TAZQ did not show any degradation under acidic, oxidative, thermolytic and photolytic stress, as is evident by the chromatograms that show only a single peak of TAZQ at 3.9 min (Figure 4). Significant degradation (19.85%) was observed in alkaline hydrolysis (Figure 5). Degradation level of 10-20% is considered acceptable for chromatographic assay validation [24,25]. Chromatogram of alkaline degraded sample showed peaks of TAZQ, major degradant and minor degradant at retention times of 3.9, 2.6 and 5.5 min, respectively. Resolution between the peaks of TAZQ and major degradant was found to be 2.27. Results of forced degradation studies are summed up in Table 5. The peak of TAZQ was distinguishable and quantifiable among the peaks of degradation products and thus the method is stability indicating. The present study is a first report on development and validation of an RP-HPLC method for determination of TAZQ and its successful application as stability indicating assay method. The developed RP-HPLC method was found to be simple, linear, accurate, precise, specific, robust, rapid and suitable. The method effectively separated peaks of TAZQ and degradation products, and was capable of measuring their content without interference. Even though no attempt was made to identify the degradation products, this method can be employed for determination of TAZQ and as a stability indicating assay.

r2 and ƛ are correlation coefficient and wavelength, respectively

Values for Tf, N and R expressed as mean±SD 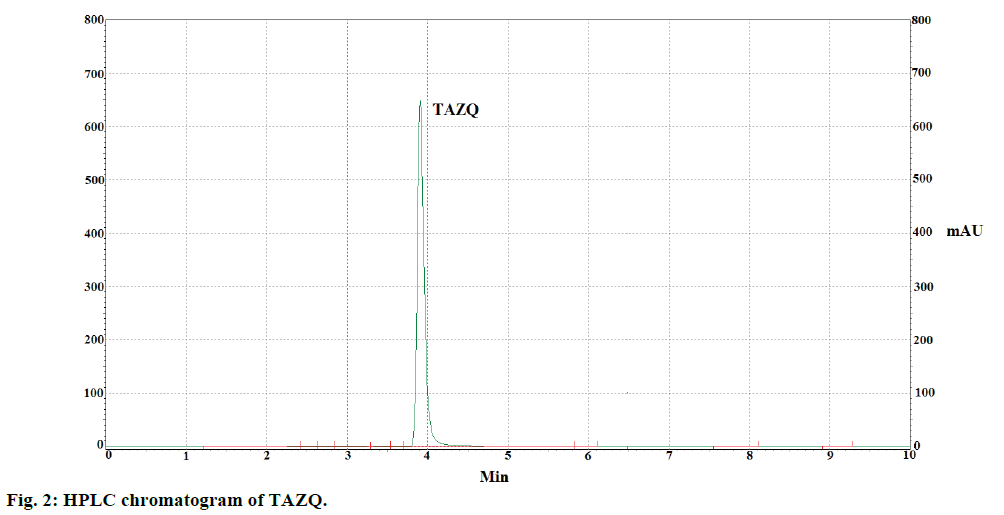