Stability-indicating HPLC method for simultaneous determination of aspirin and prasugrel

Aspirin (ASP), acetylsalicylic acid (fig. 1), is an antiinflammatory and antiplatelet drug, which is official in many pharmacopoeia which recommends a titrimetric method [1,2] and HPLC [3] for its analysis. Prasugrel (PRS), [(RS)-5‑ [2‑cyclopropyl- 1‑(2‑fluorophenyl)-2‑oxoethyl]‑4,5,6,7‑tetrahydrothieno [ 3,2‑c]pyridin-2‑yl acetate] (fig. 1), is an thienopyridine which inhibits ADP receptors by irreversibly acting on the P2Y12 receptor on platelets and is not official in any pharmacopoeia. The combination formulation is used for the treatment of the reduction of thrombotic cardiovascular events (including stent thrombosis) in patients with acute coronary syndrome. Literature survey reveals that many analytical methods are reported for the determination of PRS [4‑16] and ASP [17,18] individually and aspirin with other antiplatelet drug [19,20]. However, no method is reported for simultaneous estimation of these two drugs by reverse phase HPLC. The International Conference on Harmonization (ICH) guideline entitled “Stability testing of new drug substances and products” requires that stress testing be carried out to elucidate the inherent stability characteristics of the active substance [21]. An ideal stability‑indicating method is one that resolves the drug and its degradation products efficiently. Consequently, the implementation of an analytical methodology to determine PRS and ASP simultaneously, in the presence of its degradation products is rather a challenge for pharmaceutical analyst. Therefore, it was thought necessary to study the stability of ASP and PRS under acidic, alkaline, neutral, oxidative, and UV conditions. This paper reports validated stability‑indicating HPLC method for simultaneous determination of ASP and PRS in the presence of their degradation products. The proposed method is simple, sensitive, accurate, reproducible, stability‑indicating and suitable for routine determination of ASP and PRS in combined dosage form. The method was validated in compliance with ICH guidelines [22,23].

Standard stock solutions were prepared by dissolving 75 mg ASP and 10 mg PRS in 20 ml of methanol and make up to 50 ml with methanol to get a concentration of 1500 μg/ml ASP and 200 μg/ml PRS.

Calibration curves for prasugrel and aspirin

Tablet contains ASP and PRS in a ratio of 75:10. Taking aliquots ranging from 0.1 to 1.0 ml of standard stock solution and make up to 10 ml with diluent (water:ACN:methanol in the ratio of 60:30:10) to get 15 to 150 μg/ml ASP and 2 to 20 μg/ml for PRS. The solutions were injected using a 20 μl and chromatograms were recorded. Calibration curves were constructed by plotting average peak areas versus concentrations and regression equations were computed for both the drugs.

Twenty tablets for combined dosage form of ASP and PRS were weighed and grind to a fine powder, take label claim quantities of powder equivalent to 75 mg ASP and 10 mg PRS were weighed, mixed, and transferred to a 50 ml volumetric flask. The solution was sonicated to dissolve the powder in 30 ml methanol and diluted up to mark with methanol. The solution was filtered through a Whatmann filter paper no. 41. Take 0.5 ml of the above solution and make up to 10 ml with diluent (water:ACN:methanol in ratio of 60:30:10) to get 75 μg/ml ASP and 10 μg/ml PRS. A total of 20 μl volume of the above sample solution was injected into HPLC and peak areas were measured under optimized chromatographic conditions.

Literature survey indicated that both drugs PRS and ASP are acidic in nature having pKa of 5.21 and 3.49, respectively. All methods for PRS and ASP whether individually or in combination with other drugs were developed at acidic mobile phase (pH around 3.0). Because at higher pH significant tailing of both drugs and more distance between two drugs were observed. In preliminary experiments, both drugs were subjected to the separation by reverse phase HPLC using water pH 3 adjusted by orthophosphoric acid, 0.025 mM KH2PO4 buffer with different pH, methanol, and acetonitrile as organic modifiers in different proportions.

The method of analysis was validated as per the recommendations of ICH [24] and USP [25] for the parameters like specificity, accuracy, linearity, precision, detection limit, quantitation limit, and robustness. Specificity was determined by evaluating the ability of the proposed method to separate PRS and ASP from its potential degradation products. Forced degradation studies were performed for bulk drug and formulation to provide an indication of the stability‑indicating property and specificity of the proposed method. The accuracy of the method was determined by calculating the percentage recovery of ASP and PRS. For both the drugs, recovery studies were carried out by applying the method to drug sample to which known amount of ASP and PRS corresponding to 20, 40, and 60% of label claim had been added (standard addition method). Intraday and interday precision study of ASP and PRS was carried out as per guideline. The limit of detection (LOD) and limit of quantitation (LOQ) were calculated using the following formulae: LOD=3.3(SD)/S and LOQ=10(SD)/S, where SD is standard deviation of response (peak area) and S is average of the slope of the calibration curve. System suitability tests are an integral part of chromatographic method, which are used to verify reproducibility of the chromatographic system. To ascertain its effectiveness, certain system suitability test parameters were checked by repetitively injecting the drug solution at the concentration level 75 and 10 μg/ml of ASP and PRS, respectively, to check the reproducibility of the system. For robustness evaluation of HPLC method a few parameters like flow rate, percentage of methanol in the mobile phase and pH of mobile phase were deliberately changed. One factor was changed at one time to estimate the effect. Robustness of the method was done at the concentration level 75 μg/ml ASP and 10 μg/ml PRS, respectively.

Forced degradation studies of both the drugs were carried out under conditions of hydrolysis, dry heat, oxidation, and photolysis. ASP and PRS were weighed (500 mg each) and transferred into two 50 ml volumetric flasks and diluted up to the mark with methanol to give 10000 μg/ml concentration of each drug. These stock solutions were used for forced degradation studies.

Solution stability period for standard and sample preparation was determined by keeping the solution 24 h at room temperature. After 4, 8, and 24 h the solutions were analyzed. The insignificant changes (<2%) were observed for the chromatographic responses for the solution analyzed, relative to freshly prepared standard.

Initial method develop trials were shown in Table 1 and figs. 2 and 3. The mobile phase consisting of acetonitrile:methanol:water (30:10:60, v/v), pH 3.0 adjusted with o‑phosphoric acid, at 1 ml/min flow rate was optimized which gave two sharp, well resolved peaks with minimum tailing factor for ASP and PRS (fig. 4). The retention times for ASP and PRS were 3.28 min and 6.61 min, respectively. The calibration curve for ASP and PRS was found to be linear over the range of 15-150 and 2‑20 μg/ml, respectively. The data of regression analysis of the calibration curves are shown in Table 2. The proposed method was successfully applied to the determination of ASP and PRS in their combined tablet dosage form. The results for the combination were comparable with the corresponding labelled amounts. 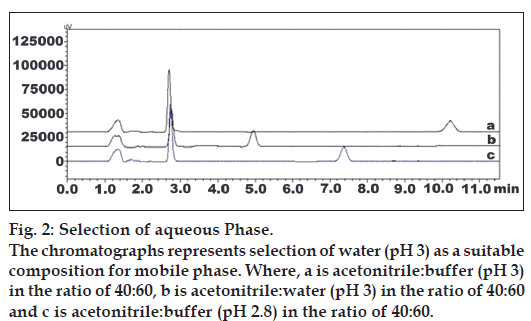 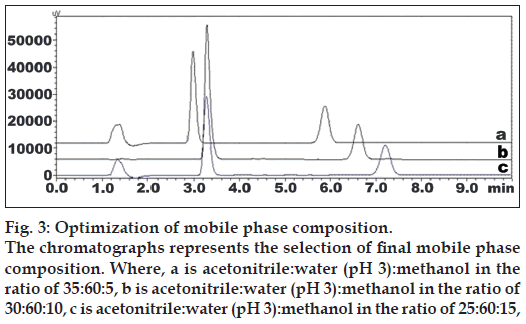 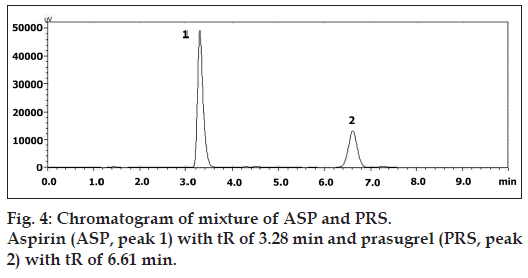 ASP is Aspirin, PRS is Prasugrel, SD is standard deviation for n=3 observations

The developed method was also found to be specific since it was able to separate other excipients present in tablet from the two drugs. Representative chromatogram of PRS and ASP standard, mixture, placebo, diluent, and salicylic acid standard were shown in fig. 5. Overlay chromatograph of blanks related to stress type was shown in fig. 6. Specificity data of PRS and ASP was shown in Table 3. The drug and degradation products were separated in the stressed samples by the proposed method. Peak purity data suggested that there was no interference of other coeluting peaks from excipient and degradation products with the drug peak and drug peak was attributed by one component only but not by degradation products. So, the developed method has been found to be specific. 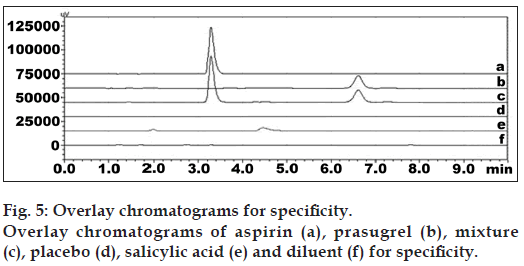 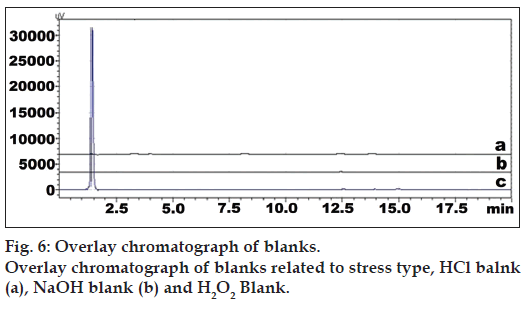 The LOD for ASP and PRS were found to be 0.374 and 0.05 μg/ml, respectively, while LOQ were 1.13 μg/ml and 0.15 μg/ml, respectively. The results for validation and system suitability test parameters are summarized in Table 4. Results for robustness evaluation for both the drugs are presented in Table 5. Insignificant differences in peak areas and less variability in retention times were observed.

Table 5: Results of Robustness Study of ASP and PRS 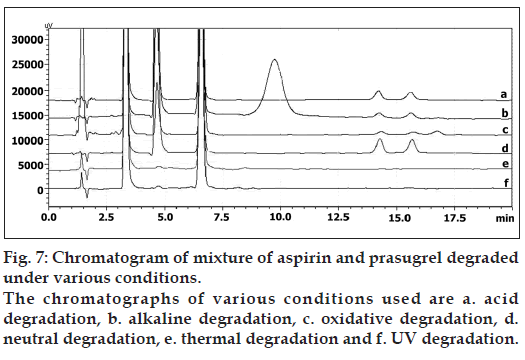 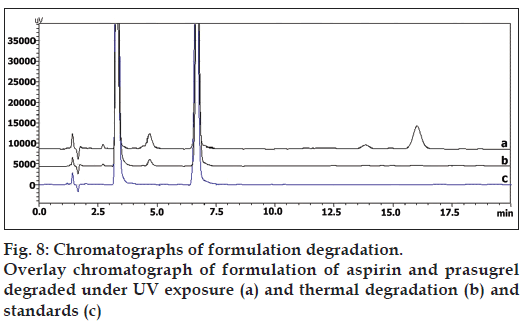 Table 6: Summary of Degradation Studies for ASP and PRS

In the proposed study, stability‑indicating HPLC method was developed for the simultaneous determination of ASP and PRS and validated as per ICH guidelines. Statistical analysis proved that method was accurate, precise, and repeatable. The developed method was found to be simple, sensitive, and selective for analysis of ASP and PRS in combination without any interference from the excipients. The method was successfully used for the determination of drugs in a pharmaceutical formulation. Assay results for combined dosage from using proposed method showed 97.56±0.095% of ASP and 93.35±0.525% of PRS. The results indicated the suitability of the method to study stability of ASP and PRS under various forced degradation conditions viz. acid, base, dry heat, neutral, oxidative, and UV degradation. Stability data for prasugrel and aspirin was shown in Table 7. It can be concluded that the method separates the drugs from their degradation products; it may be employed for the analysis of stability samples of ASP and PRS. However, the characterization of degradation products was not carried out.

Table 7: Summary of Solution Stability Data for ASP and PRS