Studies of antimicrobial activities of some 4-thiazolidinone fused pyrimidines, [1,5]-benzodiazepines and their oxygen substituted hydroxylamine derivatives

Literature survey revealed that thiazolidin-4-ones and their derivatives, which have been synthesized and screened for antimicrobial activity, are found biologically active with anticonvulsant [1], antitubercular [2], antifungal [3], local anesthetic/ antiHIV [4], and antiinfl ammatory activity [5] with dual cyclooxygenase/lipooxygenase inhibition [6]. Literature survey also revealed that thiazolidin-4-ones have been used as new SHP-2 [7], and protein tyrosine phosphatase-1B inhibitors [8]. Like thiazolidin-4- ones, pyrimidines also play a vital role in many biological processes and have potential anticancer, antiinflammatory and analgesic activities [9,10]. Some pyrimidines and their derivatives are found to possess antiHIV activity [11]. It has also been found that 2-phenylaminopyrimidines possess protein tyrosine kinase inhibitor activity [12]. [1,5]-benzodiazepines are widely used as sedatives, sleep inducers, anesthetics, anticonvulsants, muscle relaxants and also as tranquilizers since 1960 when chlordiazepoxide was introduced as a tranquilizer.

Dilazep, a non-nucleoside reverse transcriptase inhibitor (NNRTI) has also been evaluated for the treatment of kidney disease such as chronic nephritis and its tablets (containing dilazep HCl, lactose, starch and cellulose-20:20:50:5) are used for improving hematopoiesis. Some arylpyridodiazepine and thidiazepine derivatives are highly selective HIV-1 inhibitors [13]. The antiarrhythmic activity of derivatives of dibenzazepine have been studied and found that the most active compounds are those in which carbethoxyamine groups in position-3 in combination with dimethylamino or diethylaminoacetyl groups in position-5 of dibenzazepine ring are present [14]. Literature survey revealed that hydroxylamines and their oxygen-substituted derivatives are reversible inhibitors of allinase. These are also potent inhibitors of aminobutyrate and aminotransferase in Pseudomonas.

The aminooxy compounds possess broad spectrum antibacterial activity. Aminooxy compounds have also been known for some time as potent inhibitors of pyridoxal-5-phosphate dependent enzymes such as aminotransferase, serine hydroxymethyltransferase, tyrosine decarboxylase, cystathionase and ornithine decarboxylase [15,16]. It is mostly true that even minor changes in structure of a molecule with appropriate substituent may change its pharmacological profile appreciably. Keeping in mind this concept, thiazolidin- 4-one condensed pyrimidines, thiazolidin-4-one condensed [1,5]-benzodiazepines and their oxygen substituted hydroxylamine derivatives have been synthesized [17-19] and screened for antimicrobial activity to study the quantitative structure activity relationship between substituents present on the basic nucleus and activity alteration.

Nutrient agar medium was used for culture of bacteria in which beef extract (3 g), peptone (5 g), sodium chloride (5 g) and agar-agar (15 g) were mixed in 1000 ml distilled water. The nutrient agar medium was sterilized by autoclaving at 15 psi and 121° for 20 min. The medium was poured in Petri dishes and left for some time to solidify. These Petri dishes were inoculated with 0.2 ml suspension of organisms using the cup-plate method [20]. Four wells were made in the medium with the help of a sterile borer and subsequently these wells were filled with four different concentrations (250, 500, 750 and 1000 ppm) of the synthesized compounds using well diffusion method [21]. Streptomycin (250, 500, 750 and 1000 ppm) was used as reference drug. The Petri dishes were incubated at 37° in an incubator and examined for the zone of inhibition [22] after 24-48 h. Bacillus subtilis (Org. 1), Escherichia coli (Org. 2), Proteus mirabilis (Org. 3) and Salmonella typhi (Org. 4) were taken for antibacterial activity.

Sabouraud agar medium was used for culture of fungi in which glucose (20 g), peptone (10 g) and agar-agar (15 g) were mixed in 1000 ml distilled water. The procedure explained in the antibacterial activity was followed. Aspergillus fumigatus (Org. 5) and Candida albicans (Org. 6) were used for antifungal activity.

Plasmodium falsiparum species were grown, adapted and maintained in vitro routinely. For conducting the experiment, the P. falciparum culture was synchronized to ring stage and diluted with fresh human erythrocytes to adjust the level of parasitaemia between 1000 to 80 000/μl of blood. The in vitro assay of inhibition of schizont maturation was followed for screening the antimalarial activity of the compounds. The experiment was done in 24 well microtire plates in the presence of various concentrations of drugs followed by standard method[23,24]. The control wells were without drug. The growth was monitored after 24-36 h of culture when the parasites would have developed to schizont stage. Thick smear was prepared from each well. The schizont maturation in experimental well was compared with control well. Percent inhibition was calculated according to the following formula: % inhibition=100–(No. of schizonts or 200 asexual parasites in test well/ No. of schizonts or 200 asexual parasites in control well)×100.

Healthy Swiss albino mice (4-6 weeks old) and P. berghei, sensitive to chloroquine, were used in the study. Peter’s 4-day test [25] was followed to evaluate the blood schizontocidal action against P. berghei in Swiss albino mice. The animals were divided into groups consisting of 5 mice each. All the groups were injected P. berghei infected red blood cells in a volume of 0.1 ml (diluted in phosphate buffer solution, PBS) on day 0 intraperitoneally. All the experimental groups received the drugs in different concentration on day 0 to day 3. Control group received only PBS and one group was given chloroquine (IC50 value= 0.03 μg/ml) 3 mg/kg as a standard antimalarial drug. On day 4, thin blood smears were prepared from the tail vein to monitor the parasitaemia. Percent inhibition of the parasitaemia is calculated against the control group. The chloroquine recipients group was negative throughout.

Alkoxyphathalimide derivative of thiazolidinopyrimidines were found to have signifi cant antifungal, antibacterial and antimalarial activity. Activity was increased with introduction of chloro group at the para-position in arylimino moiety and with increasing of length of alkyl chain in alkoxyphthalimide group whereas it is decreased when hydroxyl group was introduced. Structures of compounds 2Xa, 2Xb, 2Xc and 2Xs are shown in fig. 1. The antibacterial and antifungal activities were increased when the arylidene unit was introduced in thiazolidinone nucleus at position-5 but activity was decreased when hydroxyl group was present at para-position in arylidene unit. Structures of the compounds are shown in figs. 2 and 3. Compounds 2Xs, 3Xa and 4Xa were found to exhibit signifi cant antimicrobial activities. These results suggest that antimicrobial activities are strongly affected by the presence or absense of alkoxyphthalimide moiety and hence compound 3Xa and 4Xa showed signifi cant activity than compounds 3IXa and 4IXa (comparison in figs. 3 and 4). Although [1,5]-benzodiazepines have strong antibacterial and antifungal activity but it was found to show slightly lower activity than alkoxyphthalimide derivatives of thiazolidinopyrimidines.

Effect of various concentrations of compounds on the growth of organisms used and zone of inhibition is given is mm. *Significant activity, Moderate activity. 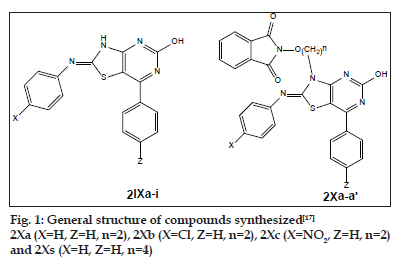 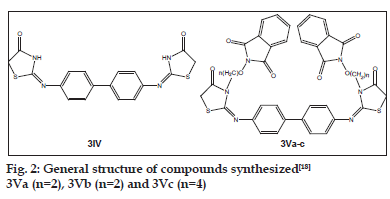 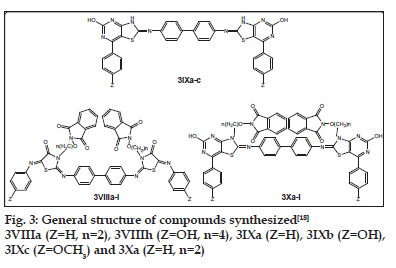 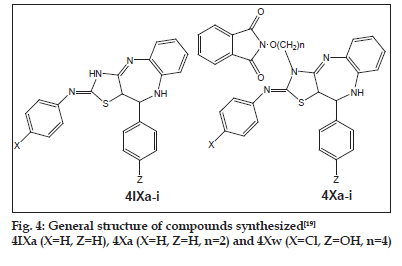 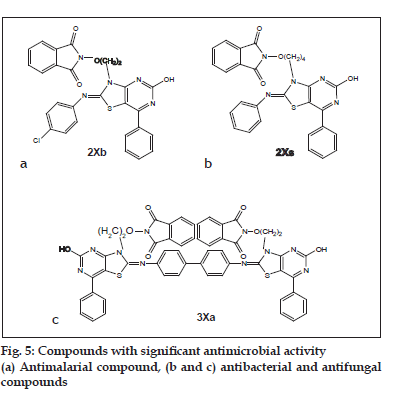