Intra ocular implants of sodium alginate alone and in combination with hydroxypropylmethylcellulose with or without calcium chloride were formulated with indomethacin as a model drug. The drug release from the implants was evaluated using static method, continuous flow through apparatus (developed in house), USP dissolution and agar diffusion. Except in the static method, indomethacin particle size did not impart any effect on the drug release. In agar diffusion method, an increase in agar concentration from 1 to 2% resulted in a significant decrease (P<0.005) in the amount of drug released. Inclusion of hydroxypropylmethylcellulose (33.3, 41.6 and 50% w/w), resulted in decrease of indomethacin release irrespective of the method of dissolution study. The agar diffusion method and the continuous flow through methods seem to simulate to a certain extent the in vivo conditions as far as the placement of the device and the hydrodynamic diffusion layer around the intra ocular implant is concerned. The static method and USP method affected the hydrodynamic diffusion layer either too slowly or too fast.

In ocular drug delivery systems, the primary but important efforts concern the conception and design of new biodegradable implantable systems to interior parts of the eye to prolong the residence time. Novel systems are designed to effectively target the ocular region like liposomes or microspheres, which are injected into the vitreous cavity with a fine needle [1-3]. However, intraocular devices have superior patient compliance than conventional systems of ocular administration of drugs.

The biodegradable polymeric implants aid in maintaining drug concentration in a therapeutically appropriate range thereby reducing harmful side effects associated with intra-vitreal and IV administration. These devices provide a continuous, long-term administration of drug thus eliminating the discomfort associated with multiple dosing and improve patient compliance [4]. Fabrication and evaluation of Intra ocular implants is still very tentative due to the highly complex nature of the tissue in which they are placed. The limited knowledge about the flow of ocular fluids around the implanted device requires that its in vitro release should be studied and optimized carefully.

In vitro dissolution plays an important role in the development process of a new formulation as it gives a preliminary data on the drug release behavior of the formulation. From the formulation viewpoint it is extremely important that at various stages of development, the formulator is able to test the release profile of the drug in an environment, which would closely mimic the in vivo condition. Agar diffusion, USP basket dissolution method, static method and continuous flow through apparatus are widely employed for in vitro drug release from intra ocular implants. There is seldom any investigation reporting a comparative evaluation and factors influencing these methods.

Indomethacin and sodium alginate alone and in combinations with HPMC, with or without calcium chloride were mixed together well in a mortar and slugged on a Manesty E2 (Manesty, U.K) single punch machine using 12 mm diameter punches. The resultant slugs were broken and sieved through sieve #60 and #100. The granules passing through #60 and retained over #100 were compressed directly using 2×7.5mm punches on Manesty E2 single punch machine to yield track-field type implants.

Ten millilitres of 1 and 2% w/v sterilized agar solution was poured on Petri dishes (90 mm diameter), aseptically and allowed to set. A circular hole was made in the center of the agar plates and the implant was placed at the center of the bore and covered with the agar plug. The implants were removed at pre-determined time intervals and dissolved in phosphate buffer (pH 7.4), filtered, diluted and residual drug content was measured spectrophotometrically at 319.5 nm. The agar gel was dissolved in hot phosphate buffer (pH 7.4) and analyzed for indomethacin content using an appropriate blank.

USP apparatus-I (Campbell Electronics, Mumbai) was used with 500 ml of phosphate buffer (pH 7.4) at 37±1° as the dissolution medium with the basket speed maintained at 50 rpm. At pre-determined time intervals aliquots were withdrawn and replaced with equal volume of pre-warmed buffer. The samples were analyzed for indomethacin content at 319.5 nm, spectrophotometrically.

Individually weighed implants were placed in stainless steel mesh holder of dimensions 2×4×6 mm and suspended in amber coloured vials containing 10 ml of phosphate buffer (pH 7.4) and placed in a water bath thermostated at 37±1°. At pre-determined time intervals the dissolution medium was completely withdrawn and replaced with pre-warmed buffer to ensure sink conditions. The withdrawn samples were analyzed for indomethacin content as described earlier.

The studies were conducted using an in house fabricated dissolution cell, described elsewhere [5].

The dissolution cell consisted of two circular plates of 3.8 cm diameter and 1.2 cm thickness, made of acrylate. The plates were held together by means of 3 screws. The bottom plate had a groove of 1.7 cm diameter and 6 mm deep, fitted with #80 mesh for supporting the implant. An outlet tube was provided for collecting the eluate. The top plate had a hole for the inlet of the dissolution medium (phosphate buffer pH 7.4). The entire setup was connected from the top by a silicone tubing of 1mm internal diameter to a peristaltic pump. The flow rate of the medium was maintained at 0.8 ml/h and the eluate was collected in amber coloured vials as a function of time and analyzed for indomethacin content at 319.5 nm.

Experimental results are expressed as mean ± standard deviation (SD). The student ?t? test was performed to determine the level of signifi cance. Differences were considered to be statistically significant at P<0.05

The formulation variables and the physico-chemical characteristics of the various batches of the prepared implants are shown in Tables 1 and 2, respectively. Thickness, weight and drug content varied within ± 5%. Kunou et al [6,7], studied the in vitro release from PLGA scleral implants of gancyclovir by incubating the implants in 2 ml of phosphate buffered solution in a shaking water bath at 37°. Balasubramaniam et al [4,8], reported a static method for studying the in vitro release of indomethacin from film type intra ocular implants of indomethacin. As there is a lot of variation in the different methods used by various investigators, an attempt was made in the present study to evaluate the dissolution profiles of the prepared (compressed) implants using four different methods. In all the cases effect of parameters like particle size of the drug, HPMC concentration and calcium chloride concentration were studied.

Drug release was independent of the particle size of the drug from all the methods except the static method, where a significant difference (P<0.05) was observed (fig. 1). Fig. 2 shows that, an increase in the concentration of HPMC in the implants caused a significant decrease in the release rate of indomethacin. Though various factors are likely to be responsible for the decrease in drug release with an increase in HPMC concentration from all the methods, some general trend seems to appear. HPMC partially hydrates forming a pseudo gel which control swelling of the implant, subsequently overall dissolution rate and drug availability. Once the protective gel layer is formed, two rate mechanisms predominate9. Firstly, the pseudo gel permits additional water to penetrate into the device, extending the gel layer into the implant. Secondly, the outer gel layer fully hydrates and begins to be dissolved by the fluids. For sparingly soluble drugs like indomethacin, the dissolution rate is primarily dependent on diffusion (due to swelling) and to some extent on erosion, which in turn is dependent on viscosity of the gel. Thus increasing the concentration of HPMC increases the viscosity of the resultant gel, thus resulting in slower drug release. Cross-linking of sodium alginate involves the interaction between cations and ?G-residues? in sodium alginate, resulting in the formation of an ?egg box? structure10. (fig. 3), indicate that an increment of calcium chloride caused a significant decrease (P<0.05) in the amount of drug released from all the methods. With increasing concentration of the crosslinker (Ca++), more calcium ions will be available for cross-linking, which results in the formation of a dense calcium alginate matrix that can bring about a decrease in drug release. 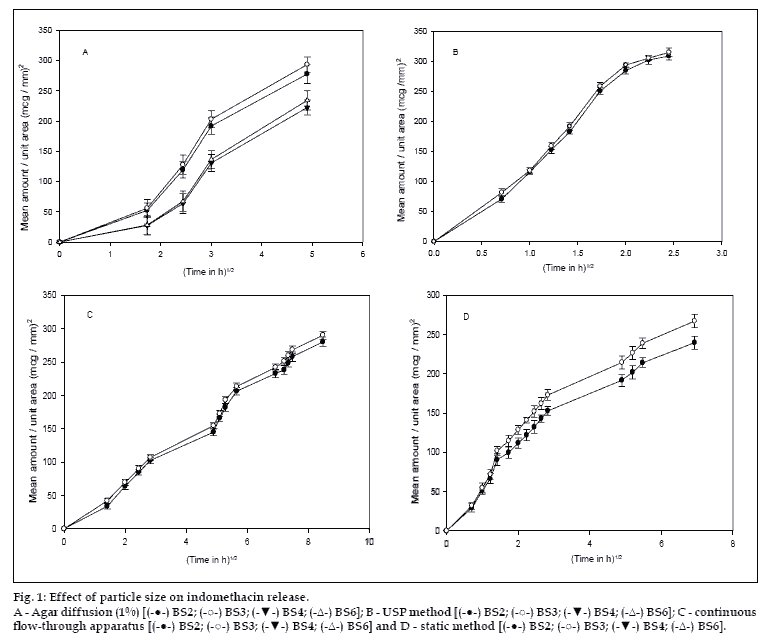 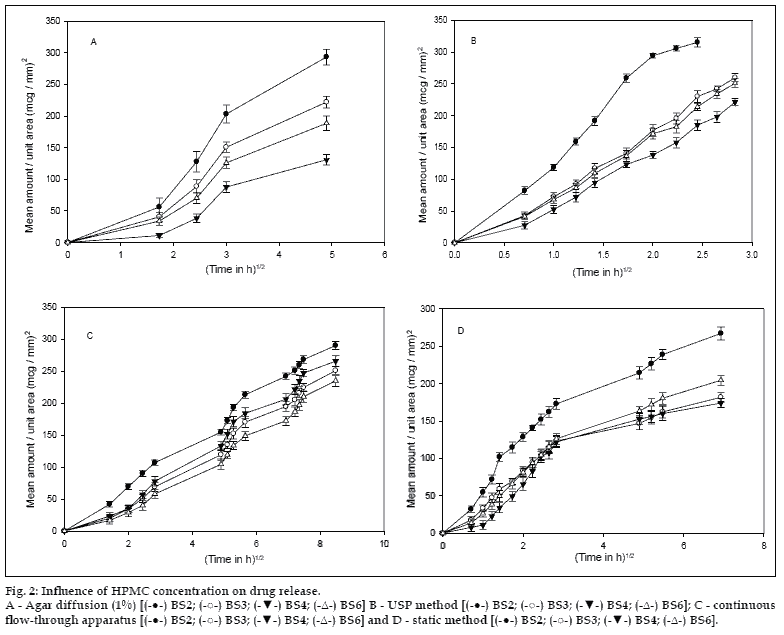 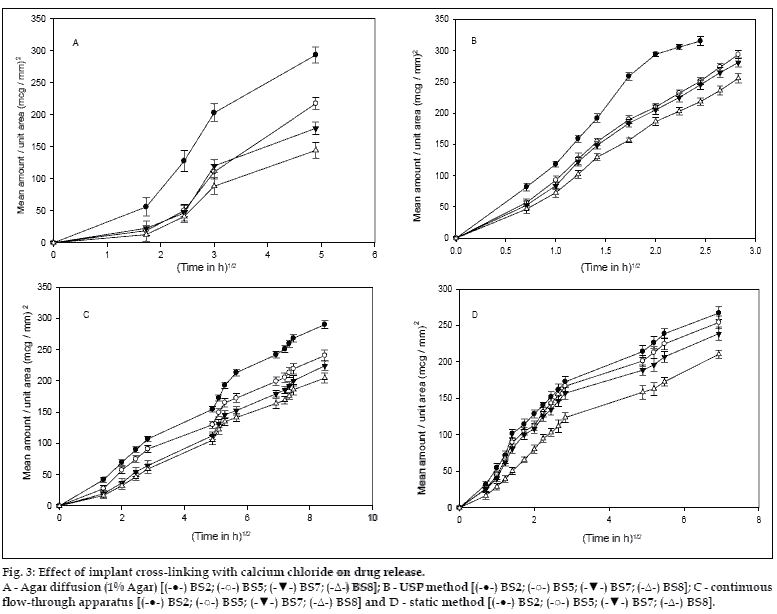 An increase in the concentration of agar from 1 to 2% resulted in a significant decrease (P<0.05) in the amount of drug released which may be a consequence of increase in the strength of the gel formed. The increment in gel strength decreases the amount of available aqueous medium, as the water molecules would be entrapped within the gel structure, resulting in decreased rate of diffusion of the drug from the implants to the surrounding medium. It has been reported earlier that the drug diffusion coefficients from HPMC and sodium alginate matrices are strongly dependent on the water content of the system [11].

Amongst the methods studied, the agar diffusion method and the continuous flow through method seem to have the potential to prolong the drug release from the compressed implant and also simulate to certain extent the in vivo conditions as far as the placement of the device is concerned. The static method, which was successfully utilized for evaluating drug release kinetics from Þ lm type implants [4,8] was not suitable for evaluating drug release from the compressed implant, since the mesh holder, in which the implant was placed acted as an impediment to the uniform swelling of the implant, resulting in irregular swelling during the course of the study.