Synthesis and antibacterial activity of triphenyltinbenzoate

M. K. Choudhury* and B. Zewdie

Triphenyltinbenzoate was synthesized using triphenyltinchloride and silver benzoate prepared from sodium benzoate. The structure of the synthetic compound was elucidated by spectral and C, H analysis. The antibacterial activities of the organotin compound were determined against four bacteria namely Escherichia coli (ATCC 25922), Staphylococcus aureus (ATCC 25923), Streptococcus pyogenes (clinical isolate) and Pseudomonas aeruginosa (ATCC 27853) in vitro experiment. All the bacteria were inhibited at a concentration of 200 ?g/ml and 20 ?g/ml in dimethylsulphoxide solution and the minimum inhibitory concentration was found to be same, 7.5 ?g/ml for Escherichia coli, Staphylococcus aureus, Streptococcus pyogenes and 10 ?g/ml for Pseudomonas aeruginosa.

Organotin compounds show a large spectrum of biological activities. It was observed that several organotin compounds were found to be antineoplastic and antiviral agents, used commercially as bactericides, fungicides and acaricides [1-3]. Some were potential biocides [4], they exhibited significant fungicidal activities [5], triphenyltin acetate has been commercially marketed as a fungicide [6]. The antifungal activities of organotin compounds were also reported [7,8]. Tributyltin compounds were first used as mollusicides to kill several species of fresh snails that were intermediate hosts of the parasitic worm schistoma which transmits the disease schistomiasis to human [9]. The antibacterial and antifungal activities of trimethyltinbenzoate-4-picoline were reported earlier [10,11]. Triphenyltin acetate and triphenyltin hydroxide are used as agricultural fungicides [12].

Triphenyltin chloride obtained from Merck- Schuchardt, Germany was used for the synthesis and other chemicals were procured from BDH, England. Mueller-Hinton Agar and Mueller Hinton Broth were used for antibacterial activities. IR spectra were recorded in Perkin Elmer spectrum BX spectrophotometer using KBr discs. 1H and 13C-NMR were measured in Bruker Advance DMX 400 FTNMR using tetramethylsilane (TMS) as an internal standard and CDCl3 as a solvent.

Triphenyltinbenzoate (TPTB, fig. 1) was sythesized by the reaction between silver benzoate (2.4 g, 10 mmol) and triphenyltin chloride (4.04 g, 10 mmol) in chloroform (150 ml). The mixture was stirred for 48 h in a conical flask covered with an aluminium foil in the dark and the precipitate (AgCl) formed was filtered. The clear filtrate was evaporated to give a solid, crystallized from chloroform, 4.44 g (90% yield), mp 79-80o. The Rf values of triphenyltinbenzoate and triphenyltinchloride were 0.48 and 0.40 respectively in TLC (benzenechloroform- methanol, 10:9:0.5). 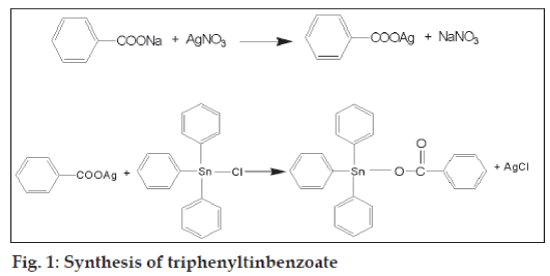 The antibacterial activity was determined against Escherichia coli (ATCC 25922), Staphylococcus aureus (ATCC 25923), Streptococcus pyogenes (clinical isolate) and Pseudomonas aeruginosa (ATCC 27853) using the agar diffusion method. Mueller- Hinton Agar (MHA) medium was prepared according to manufacturer’s instruction. Solutions of three different concentrations of the TPTB compound, 200 μg/ml, 20 μg/ml and 2 μg/ml were prepared using 100% DMSO as solvent. Five Petri dishes (120 mm diameter) were used for the experiment. MHA medium (20 ml) was poured into each Petri dish and then sterilized in autoclave at 121° for 15 min. They were cooled and then each plate was inoculated with different bacteria culture. Five wells were dug on each inoculated plate using a sterilized cork borer (5 mm internal diameter). Two wells in each plate were filled with 0.5 ml test solution of triphenyltinbenzoate having concentrations 200 μg/ml and 20 μg/ml, the third and fourth wells filled with ciprofloxacin (standard antibacterial drug) having concentrations 4 μg/ml, 2 μg/ml and the fifth well with DMSO (100%, as a control) for the sake of comparison. The plates were then incubated at 370 for 24 h. After incubation the cultures were examined for the evidence of inhibition that appeared as clear zones of varying diameters according to concentration around the wells and measured in mm.

The minimum inhibitory concentration (MIC) was determined using tube dilution method. Serial dilution of test compound, triphenyltinbenzoate and ciprofloxacin were prepared in test tubes containing nutrient Mueller-Hinton broth as diluent. The lowest concentration that showed inhibition of growth of each organism was further diluted to different lower concentrations in order to determine the MIC. Each bacterial isolate was inoculated into different tube accordingly containing the diluted compound and then incubated at 37° for 24 h. The tubes were then examined for the presence of growth considering turbidity as criteria. The lowest concentration in each series that showed no growth (no turbidity) of test organism was considered to be the MIC of that organism.

Table 1: Zone of inhibition and mic values of tptb and ciprofloxacin against different bacteria

At 200 and 20 μg/ml concentrations of ciprofloxacin, the zone of inhibitions were too large to measure that went out of the scale in the Petri dish used. Therefore, a solution of much lower concentrations of 4 and 2 μg/ml were chosen to overcome the difficulties. From the above results obtained in the experiment it is very clear that the synthetic organotin compound (TPTB) is almost 100 times less active than the standard drug ciprofloxacin. However, the synthetic compound may be useful for some other purposes where a mild active drug is required. The advantage of using organotin compounds is that they are biodegradable that ultimately result in the formation of a non-toxic SnO2 (tin dioxide) compound when used for agricultural purposes.