The long-term acid suppression by irreversible H+/ K+-ATPase inhibitors because of covalent binding to the specific enzyme is reported to increase C. difficalies infection [1], improper absorption of Vit-B12[2], calcium [3] and other opportunistic infections [4]. SCH 28080 [5] is the prototype of a reversible proton pump inhibitor, which is effective in ulcer healing yet avoid prolonged achlorhydria. Derivatives of imidazole [6] quinoline [7], isoquinoline [8], quinazoline [9], pyrazine [10] and thiazole11 that lack the sulfinyl group but contain a basic group have been reported as reversible proton pump inhibitors. Keeping in view this structural flexibility and capitalizing on the basic structural feature, we thought to explore several benzimidazole, benzotriazole and benzothiazole derivatives to find some alternatives to the present irreversible proton pump inhibitors.

With the above aim, different 2-(1′-iminothioimido substituted)-1′-substituted phenyl benzoic acids (P1-9) were prepared. Melting points were determined in open capillary tubes and are uncorrected. The purity of the compounds was checked on silica gel-G coated plates using iodine as visualizing agent. Infrared spectra were recorded on Perkin Elmer model 600 spectrophotometer using KBr pellet. 1H NMR (DMSO d-6) spectra of title compounds were recorded on a Bruker DRX-300 NMR spectrophotometer (300 MHz) using TMS as internal standard. The C, H and N elemental analysis was carried out using a Perkin Elmer-2400 elemental analyser. The animal experiments were carried out following the protocols approved by the Institutional Animal Ethics Committee of the University Department of Pharmaceutical Sciences, Utkal University (Registration no-990/c/06/ CPCSEA). The title compounds (P 1-9) at a dose of 100 mg/kg were tested for antiulcer activity [12] using reduction in total acidity, free acidity and ulcer index as parameters. Omeprazole (40 mg/kg) was used as the standard drug. 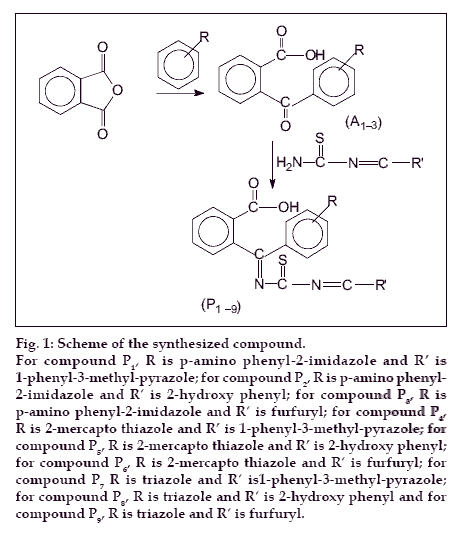 Male rats weighing between 140 and 175 g were selected for pyloric ligation ulcer model [12]. Rats were divided into eleven groups consisting of six animals each and were fasted overnight. One group received normal saline 2 ml/kg (negative control). The second group received omeprazole 40 mg/kg (positive control) and the other groups received test compounds (100 mg/kg) by oral route 30 min prior to pyloric ligation. Animals were sacrificed 4 h later and the stomach was opened to collect the gastric contents. The gastric contents were centrifuged at 1000 rpm for 10 min. One ml of the supernatant liquid was pipetted out and diluted to 10 ml with distilled water. The solution was titrated against 0.01 N sodium hydroxide solution using Topfer′s reagent as indicator to the end point when the solution turned to orange color. The volume of sodium hydroxide consumed was taken as corresponding to the free acidity. Titration was further continued till the solution regained pink color. The volume of sodium hydroxide solution required was noted and total acidity calculated. After opening the stomach the ulcer index was calculated. The results are expressed as mean±SEM. The difference between groups was determined using the one way analysis of variance (ANOVA) followed by Dunnett′s test and p<0.05 was considered significant.

From the data in Table 2 it can be inferred that all the compounds at the tested dose level exhibited varying degree of antiulcer activity. The compound P3, P6, P7 and P9 exhibited good gastro protective actions as indicated by their very low ulcer index, free acidity and total acidity values. The inhibition of gastric acid secretion was better for benzotriazole and benzothiazole derivatives than substituted benzimidazoles. However benzimidazole derivatives exhibited significant capacity for neutralization of gastric acid compared to control. The present study indicates the necessity of a basic group but shows structural flexibility among the compounds to exert the antiulcer effect. Presence of iminothioimido derivatives of substituted pyrazole, fufuryl and o-hydroxy phenyl does not seem to affect activity significantly.

Each value represents the mean± SEM. No of animals in each group were 6. *p<0.05 as compared to control (Dunnett′s test)

The authors wish to extend thanks to Prof. B. B. Barik, HOD, University Department Pharmaceutical Sciences, Utkal University, Bhubaneshwar for the encouragement and facilities provided for the research work and Mr. L. Rout, IIT, Guwahati for helping analysis and characterization of the compounds.