4,6-Diaryl substituted-4,5-dihydro-2-amino pyrimidines have been synthesized by the reaction of chalcones with guanidine nitrate. Their chemical structures have been confirmed by means of IR and NMR data and by elemental analysis. The compounds were screened for antibacterial activity against 16 gram-positive bacterial strains in minimum inhibitory concentration. The minimum inhibitory concentration of the compound II has found to be better than the reference standards taken for the antibacterial screening. Sulphamethoxazole and trimethoprim were taken as reference standards.

In our continuous search for newer antibacterial agents, we have synthesized a series of compounds with dihydropyrimidine nucleus and evaluated for antibacterial activity against gram-positive strains. The chalcones [1-6] were prepared by Claisen-Schmidt condensation and then treated with guanidine [7,8] to get 2-aminodihydropyrimidines (Scheme 1). The amino group was then converted in to respective ureas by treating the 2-aminopyrimidines with sodium cyanate [9,10]. 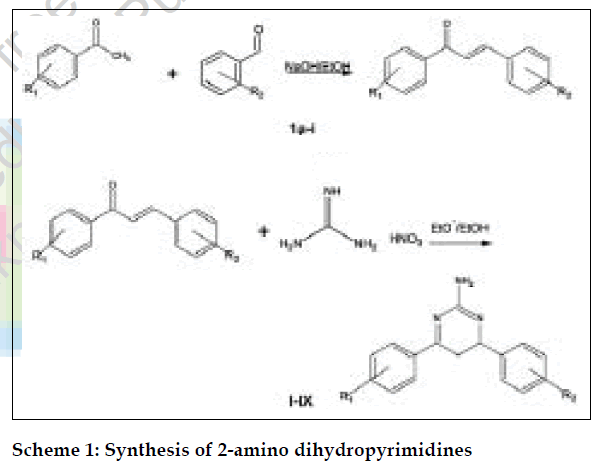 The preparation of 4,6-diaryl substituted 4,5-dihydro-2- aminopyrimidines was initiated by treating the chalcones and substituted chalcones, which have been prepared earlier by treating the corresponding aromatic ketones with corresponding aromatic aldehydes in the presence of sodium hydroxide, with guanidine [10]. The synthesized 4,6-diarylsubstituted-4,5-dihydro-2-aminopyrimidines exhibited characteristic primary amino band at 3400- 3300 cm-1 .The stretching peak of C=N appeared at 1600-1510 cm-1. The absorption band at 855-800 cm-1 was characteristic of aromatic C-H bending vibrations. The 1H-NMR spectrum also revealed that the amine proton attached to the phenyl ring at δ 8.30, singlet (2H) disappeared in D2O exchange and the aromatic protons appeared between δ 6.90-7.90 as a multiplet in all synthesized compounds.

Melting points are uncorrected. All the compounds were subjected to elemental analysis (C, H, and N) and the measured values agreed within ±0.4% with the calculated ones. The purity of the compounds was confirmed by thin layer chromatography (TLC, Silica gel; solvent system; benzene:chloroform, 9:1, 7:3). The spots were developed in TLC chamber and visualized with an ultraviolet lamp.1H-NMR spectra were recorded on a Jeol FX 90Q Fourier transform spectrometer. The IR spectra were recorded on a Jasco infrared spectrophotometer.

To a 20 ml solution of 20% sodium hydroxide in distilled water, acetophenone (0.01mol) was added and dissolved. To this add benzaldehyde (0.01 mol) in small amounts with continuous stirring with the help of a mechanical stirrer for about 2 h. The mixture was left in the refrigerator for 24 h. Then the yellowish product thus formed is filtered, dried and recrystallized from ethanol. (mp-54º, yield-65%).

To the freshly prepared solution of sodium ethoxide (0.02 mol sodium in 50 ml ethanol), chalcones (0.01 mol) and guanidine nitrate (0.01 mol) were added. The mixture was refluxed for 3-6 h. The resulting mixture was then concentrated to half of its volume and poured over crushed ice. The solid thus separated was collected, washed with cold ethanol and dried.

The product was recrystallized from hot ethanol. The melting points and percentage yields are presented in Table 1. The physical data and spectral properties were given in Table 2.

All compounds were evaluated for antibacterial activity against 16 gram-positive bacterial strains. The bacterial strains were obtained from fresh cultures in the Department of microbiology, Institute of medical sciences, Banaras Hindu University. The agar dilution method (Barry, 1991) was performed using Mueller-Hinton agar medium. Suspensions of each microorganism were prepared to contain approximately 106 colony-forming units, cfu/ml. The test organisms were inoculated in plates with serially diluted compounds and incubated overnight in an incubator oven at 35º. The lowest concentration of a compound which inhibits the growth of the organism completely without visible growth was taken as minimum inhibitory concentration (MIC). The study was simultaneously performed for the reference standards trimethoprim and sulphamethoxazole.

The reference standards used were SM-sulphamethoxazole; TRIM-trimethoprim. (MIC’s in µg/ml)

Table 3: Antibacterial activity of the compounds 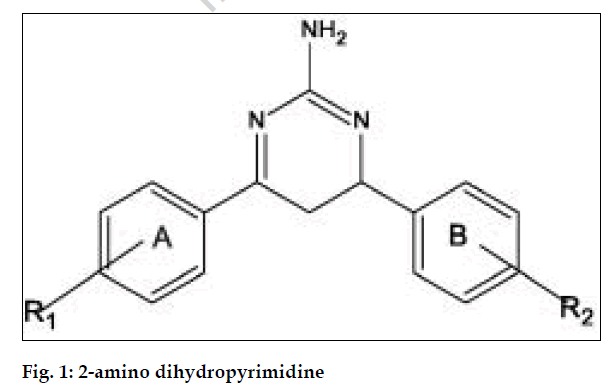 We express our sincere gratitude to the Department of Microbiology, Institute of Medical Sciences, BHU, for providing the microorganisms required for the investigation.