Synthesis and biological evaluation of some novel quinazolones 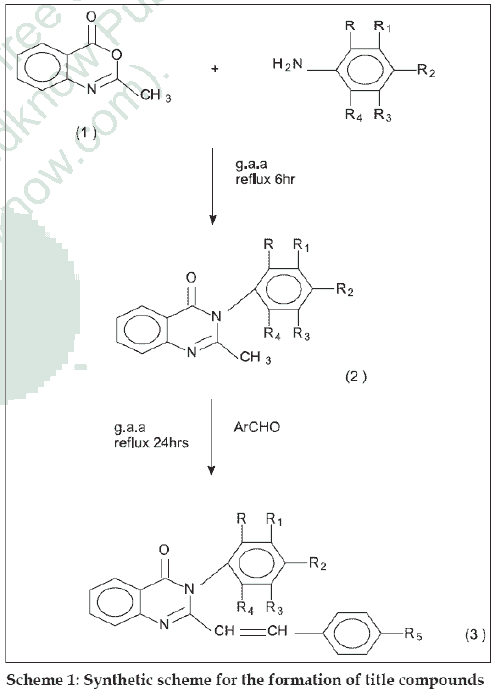 The starting material 2-methyl benzoxazin-4-one was synthesized from anthranilic acid [9]. For the synthesis of 2-methyl-3-aryl quinazolin-4-(3H)-ones, an equimolar (0.01 mol) mixture of 2-methyl-1,3-benzoxazin-4-one and aryl amine was refluxed for 6 h with glacial acetic acid. The mixture was cooled to room temperature and poured into crushed ice; the solid thus obtained was recrystallized from ethanol. IR (KBr) cm-1: 1660 (C=O str), 1469 (C-N str), 788(C-Cl str).

All the synthesized compounds were recrystallized from ethanol and *solvent system used in TLC was chloroform:acetone (1:1).

Antiinflammatory activity was measured using the carrageenan-induced paw oedema test in rats [10]. Animals were divided into different group each consisting of six animals. Out of twelve synthesized compounds, six compounds (3a, 3c, 3f, 3g, 3i, 3l) were selected as test compounds and standard ibuprofen were administered orally at a dose of 200 mg/kg as an aqueous suspension in 1% CMC, while the control group was fed with the same volume of 1% CMC suspension. The paw volume were measured using Plethysmograph immediately before and 3 h after the carrageenan injection. The percent inhibition of paw volume was calculated by using the formula, Percent inhibition= (1-Vt/Vc)×100, where Vt is the mean volume of the test drug, Vc is the mean volume of the control (Table 2). The one-way ANOVA (Scheffe’s method) test was applied, and the test compounds were found to be significantly active compared to the control (P<0.05). The institutional animal ethics committee of kasthurba medical college has approved the experimental protocol (No. IACE/ KMC/023/2004-05).

5% allowance value is 0.39 (Scheffe’s method), aP<0.05 Vs control. Note: Any two means showing a difference of 0.39 are statistically significant.

All the compounds synthesized (3a-3l) were screened for antibacterial activity using the cup-plate agar diffusion method [11] by measuring the zone of inhibition in mm. Ciprofloxacin (25 μg/ml) was used as standard for antibacterial activity. The compounds were screened for antibacterial activity against S. aureus, B. subtilis, P. aeruginosa, and E. coli in nutrient agar medium. This sterilized agar medium was poured in to Petri dishes and allowed to solidify. On the surface of the media microbial suspensions were spread with the help of sterilized triangular loop. A stainless steel cylinder of 8 mm diameter (pre-sterilized) was used to bore the cavities. All the synthesized compounds (25 μg/ml) were placed serially in the cavities with the help of micropipette and allowed to diffuse for 1 h. Dimethylformamide (DMF) was used as a solvent for all compounds and as control. The plates were incubated at 37o for 24 h. The zone of inhibition observed around the cups after incubation was measured. The results are presented in Table 3.