Chitosan (CS), a partially deacetylated form of chitin, is an amino-containing basic polysaccharide formed primarily of repeating units of β-(1,4)-2-amino- 2-deoxy-D-glucose. With a pKa of 5.5-6.5, CS is soluble and forms the cationic polymer in aqueous acidic medium below pH 6.5 in the presence of a small amount of acids such as inorganic acid (HCl and HNO3) and organic acid (AcOH and lactic acid) due to the fact that the amino groups dispersed on the structure are protonated. It is insoluble in water and precipitates above pH 6.5 by the addition of alkali solution [1]. Because of its favorable physicochemical and biological properties such as being gel-formable at low pH ranges, antibacterial, biodegradability, biocompatible, epithelial permeation enhancement, mucoadhesive and non-toxic, CS is considered as an ideal excipient that can potentially be used as a polymeric carrier in targeted drug delivery and sustained release system [2]. The application of CS in pharmaceutical respect includes gel formulations, gastric float formulations, bioadhesive formulations and colon-targeted formulations [3,4].

The application of CS in biomedical fields is limited owing to the poor solubility in physiological media. Through chemical modification, CS derivatives of specific functions (i.e. improved solubility and bioactivity) can be obtained by introducing active groups on to the hydroxyl (C3 and C6) and amino groups (C2) of CS molecules. Studies suggest that amino groups on the surface of CS chains are reactive enough to react with a number of acid chlorides, acid anhydrides and aldehydes [5].

In biological systems, vitamin C (VC) plays the role of an effective antioxidant due to the presence of the enediol moiety. It also serves as a cofactor in hydroxylation reactions and scavenges reactive oxygen species. The biochemical functions of VC, especially its functions in antivirus and antitumor are of increasing interests [6]. However the use of VC is limited by its physical and chemical instability. VC is a six-carbon keto-lactone, which contains four hydroxyls and a lactone. It is highly unstable and very easy to get oxidized and changes to dehydroascorbic acid when exposed to light, air and elevated temperature. To increase the stability of VC, various derivatives have been synthesized, including the metal salts (Na, Ca salts), ethers, esters and the polysaccharide derivatives [7].

CS contains amino groups which are protonatable in the acidic media, whereas VC contains acidic hydroxyl functionality, thus allowing the formation of a complex through ionic interaction. The synthesis of salts of VC with different substituted amines is also supported by literature [8]. In this research the synthesis of CS-VC complex (CSVC) was investigated, which was further characterized by FT-IR, DSC and 1H-NMR. The solubility and •O2- scavenging activity between CS and CSVC were compared.

CS was purchased from Zhejiang Golden Shell Biochemical Co., Ltd. and used without further purification. The viscosity molecular weight was 8.56×105 Da and the degree of deacetylation was 84% as measured on an acid-base titration method. VC was from Northeast Pharmaceutical Group Co., Ltd. The double distilled water was used for all experiments. Pyrogallic acid was from Tian Jin Bodi Chemicals Company Ltd. Isopropyl alcohol was of the analytical grade.

The infrared absorption spectra were obtained using a Bruker FT-IR spectrophotometer over the wave number range between 4000 and 400 cm-1. All powder samples were compressed into KBr disks for the FT-IR measurements. Thermal analysis was carried out using DSC60 Differential Scanning Calorimeter (Shimadzu Co., Japan). Approximately 2 mg of samples were hermetically sealed in an aluminum pan and heated from 300 to 3000 at a scanning rate of 10 0/min.

The 1H-NMR spectra of CS and CSVC were obtained from 1% solution in 1% CF3COOH/D2O and D2O, respectively using a Bruker ARX-300 MHz spectrometer. The 1H-NMR spectrum of VC was obtained using D2O as the solvent. Chemical shifts were reported in ppm.

According to the general notices of Chinese Pharmacopoeia (2005 Edition), 0.1 g of CSVC was added into 1 ml and 10 ml of different solvents respectively and stirred vigorously at 25±10 for 24 h to observe its apparent solubility based on the transparency of solutions.

The •O2- scavenging capability of different samples was assayed by measuring the inhibition of autooxidation rate of pyrogallic acid. The blank solution was prepared as follows: Tris-HCl buffer (0.05 M, 4.5 ml, pH 7.2) was added into a 10 ml test tube followed by 1.1 ml of deionized water and vortexed. The UV/Vis absorbance of solutions containing pyrogallic acid without and with the test samples added were determined according to the following procedure: Tris-HCl buffer (0.05 M, 4.5 ml, pH 7.2) was added into a 10 ml test tube. 1 ml deionized water or 1 ml test sample solution at different concentrations was added under vortex. Then pyrogallic acid (10 mM, 0.1 ml) was added. The mixture was vortexed evenly and the absorbance at 325 nm was measured immediately against the blank solution at 60 seconds intervals for 4 minutes. The auto-oxidation rate constant of pyrogallic acid before and after the addition of test sample (k0 and k1 respectively) was calculated from the slope of curve of absorbance verses time. The antioxidation rate of test samples was calculated according to the following Eqn, antioxidation rate =(k0-k1/k0)×100%

The product formed is CS-vitamin C complex, which is different from CS-vitamin C mixture in that no protonation of CS occurs in the latter [12]. VC presents several electrophilic groups. It contains four hydroxyl groups in positions 2, 3, 5 and 6 with different acidities allowing acid–base reactions. The -OH in position 3 is the more acidic one (pKa = 4.2), while the hydroxyl in position 2 has a pKa of 11.6, and those in positions 5 and 6 behave as secondary and primary alcohol (pKa ≈17 and 16, respectively) [13]. The acidic hydroxyl in position 3 of VC was expected to react with the amino group of CS, converting it into ammonium ions. The possible reaction mechanism was shown in fig. 1. 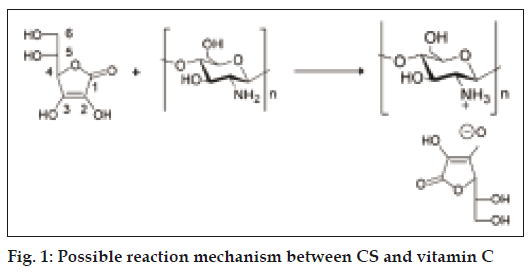 VC also presents a lactone structure, which can be subject to ring opening in the presence of amine. Comparison of the UV/Vis absorption spectrum of VC with that of CSVC indicated quite similar behavior at λmax = 242 nm, clearly demonstrating the presence of VC moiety in the polymeric chains of CSVC.

The FT-IR spectra of CS, VC, CSVC mixture and CSVC complex were shown in fig. 2. In fig. 2a, a characteristic strong peak at 3417.5 cm-1 was attributed to overlapping stretch vibrations of –NH2 and –OH groups and the peak for amide I (C=O) at 1643.7 cm-1 was seen. The aliphatic C-H stretching vibration of the polymer backbone occurred at 2923.6 cm-1 [14]. The weak deformation vibration of C-CH3 appeared at 1383.8 cm-1, indicating a higher degree of deacetylation of CS used in this experiment [15]. The four peaks in fig. 2b from 3524 cm-1 to 3214 cm-1 were attributed to the four –OH groups at C6, C3, C5, C2, respectively. The stretch vibration of lactone C=O forming intramolecular H-bond occurred at 1754.4 cm-1 and that of lactone C=O forming intermolecular H-bond occurred at 1673.8 cm-1 [16]. Figs. 2c and 2d showed quite different FT-IR spectra from each other, demonstrating the formation of complex between CS and VC. The peak at 1754.4 cm-1, which was the stretch vibration of lactone C=O forming intramolecular H-bond in VC, was shifted to 1720.8 cm-1 at a reduced intensity. It could be seen that new absorption band characteristic of bending vibration of -NH3+ appeared at 1616.1 cm-1. This result suggested that the -NH2 groups on the CS chains were protonated by the H+ supplied by VC [17]. The decrease of peak at 3428.2 cm-1 in fig. 2d indicated the reduction of free –NH2 groups after the formation of CSVC [18]. The DSC measurements were performed to investigate changes in the physical state of materials. As shown in fig 3a, the temperature at about 244.60 was the onset temperature of decomposition for CS [19]. In figs. 3b and 3c, VC showed the melting point at 196.830, which was decreased to 191.940 in the CSVC mixture (2:1, g:g). However in CSVC (fig. 3d), the endothermic peak of VC could not be seen. Therefore DSC testing results indicated the formation of complex between CS and vitamin C through the ionic interaction. 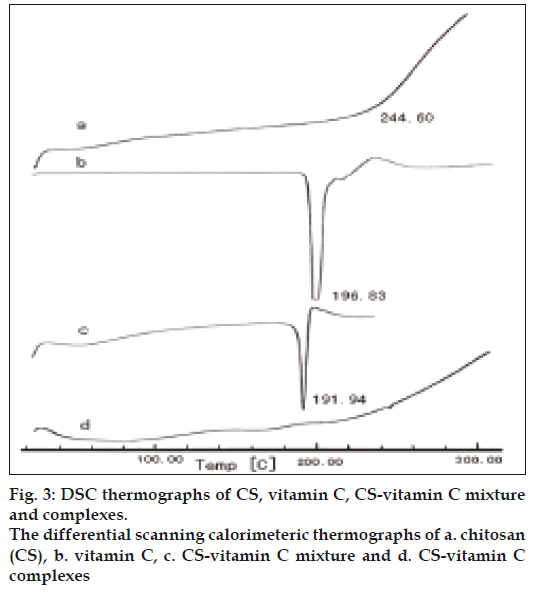 Although the polymer backbone consists of hydrophilic functional groups, CS is normally insoluble in water and most common organic solvents (e.g. DMSO, DMF, NMP, alcohols and pyridine). The insolubility is a result of its extensive intramolecular and intermolecular H-bonding between the chains and sheets of CS as shown in fig. 5 [24]. Our tests showed that CSVC was also insoluble in common organic solvents, such as DMSO, DMF, methanol, ethanol, acetonitrile and chloroform. However the solubility of CSVC in distilled water was greatly improved because most of the intermolecular H-bonding formed between –OH and –NH2 groups among CS molecules was broken down. Solubility tests showed that 0.1 g of the complex formed viscous and transparent gel in 1 ml of distilled water. A viscous solution was formed when 0.1 g of the complex was added into 10 ml of distilled water. 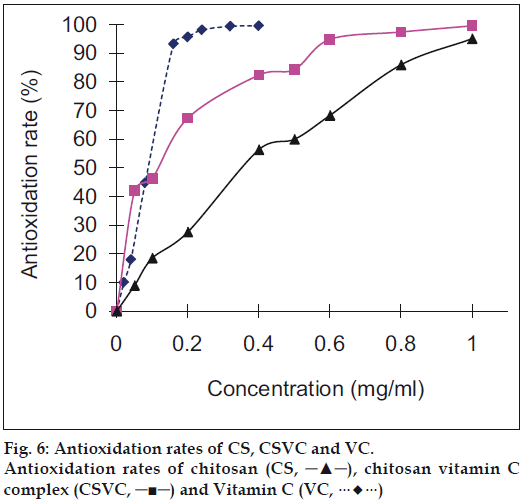 In the present study, water soluble CS-ascorbic acid complex was synthesized by ionic interaction in the heterogeneous condition. Characterizations using FT-IR, DSC and 1H-NMR confirmed the formation of complex instead of physical mixture. When compared with CS, the complex showed good water solubility and increased •O2- scavenging capability. Pharmaceutical applications of this complex, needs to be explored further.