Various 7-chloro-6-fluoro-2-arylidenylaminobenzo(1,3)thiazole (2a-h) have been synthesized by the condensation of 7-chloro-6-fluoro-2-aminobenzo(1,3)thiazole (1) with different aromatic aldehydes. The Schiff's bases on reaction with acetyl chloride, chloroacetyl chloride and phenyl acetyl chloride yielded 1-(7-chloro-6-fluorobenzothiazol-2-yl)-3,4-substituted-aryl-azetidin-2-ones (3a-x). Similarly, cyclization of Schiff's base with thioglycolic acid furnished 3-(7-chloro-6-fluoro-benzothiazol-2-yl)-2-substituted-arylthiazolidin-4-ones (4a-h). The structures of the newly synthesized compounds have been established on the basis of their spectral data and elemental analysis. Some selected compounds were evaluated for antiinflammatory, analgesic, CNS depressant and skeletal muscle relaxant activity.

The β-lactam antibiotics are extensively used for bacterial infections. The cephalosporins [1] have withstood the onslaught of microorganisms and have come to be physician’s arsenal in combating a wide range of microbial infections. Moreover various β-lactams are associated with antitumor [2], antitubercular [3], antiinfl ammatory [4] activities. Similarly, thiazolidinones have attracted considerable attention as they are also enrolled with wide range of pharmacological activities like anticonvulsant [5], analgesic [6] and antiinfl ammatory [7] activities. In continuation of our studies on benzothiazole [8,9], we have synthesized benzothiazole moiety linked to bioactive β-lactam and thiazolidinone rings, to analyse their biological profi le.

The starting material for the synthesis of desired compounds is 7-chloro-6-fluoro-2-aminobenzo(1,3) thiazole [10] (1), which on treatment with different aromatic aldehydes in concentrated sulphuric acid yields the respective Schiff bases (2a-h). The Schiff bases were separately reacted with substituted acetyl chloride and mercaptoacetic acid produced 1-(7-chloro-6-fluorobenzothiazol-2-yl)-3,4-substitutedarylazetidin- 2-ones (3a-x) and 3-(7-chloro-6-fl uorobenzothiazol- 2-yl)-2-substituted–arylthiazolidin-4-ones (4a-h) respectively (Scheme 1). The newly synthesized compounds were characterized by spectroscopic data and elemental analysis and were screened for their antinflammatory, analgesic, CNS depressant and skeletal muscle relaxant activities.

Melting points were determined in open capillaries and are uncorrected. IR spectra were recorded in KBr on FTIR Shimadzu 1400S and NMR spectra were recorded on AMX-400 in CDCl3/DMSO-d6 using TMS as internal standard (chemical shifts in δ ppm). Mass spectra were recorded on FT VG-7070H Mass spectrophotometer using the EI technique at 70 eV. Satisfactory elemental analyses were obtained for all the compounds and were within ±0.4% of the theoretical values. The reactions were monitored on TLC with solvents of varying polarity and the spots were located by iodine vapors. For antiinfl ammatory and analgesic activities, adult healthy rats of Wistar strain of either sex weighing between 150-200 g were used. For CNS depressant and skeletal muscle relaxant activity studies, adult, healthy mice of Wistar strain of either sex weighing 20-25 g were used. All animals were maintained under standard conditions and had access to pelletted animal feed and water ad libitum. The study protocols were carried out as approved by the Institutional Ethics Committee (CPCSEA Reg. No. 144).

Antiinfl ammatory activity of some selected compounds was evaluated using carrageenan induced rat hind paw oedema method [11]. The animals were divided into control, standard and test groups, each consisting of six animals. The fi rst group was treated with Tween- 80 (1%) suspension which served as control, second group was administered with a dose of 20 mg/kg suspension of diclofenac sodium intraperitoneally which served as standard and other groups were treated with 30 mg/kg of suspension of test compounds in Tween-80. After 30 min, the rats were injected with 0.1 ml of carrageenan (1% w/v) to the sub plantar region of left paw of the rats. The volume of paw was measured using potassium permanganate solution displacement technique with the help of plethysmograph both in control and animals treated with standard and test compounds at 0, 1, 2 and 3 h after injection of carrageenan. The percentage inhibition of oedema was calculated by using formula, percent inhibition = (1–Vt/Vc)×100, where Vt is the mean paw volume of the test drug, Vc is the mean paw volume of the control. The results are recorded in Table 2.

Table 2: Results of antiinflammatory activity of the synthesized compounds

The animals were divided into four groups of six animals each. The animals, which showed reaction time of 2-3 s, were selected for experiment and analgesic activity of some selected compounds was studied by tail flick method [12]. The tail received radiant heat from a wire, which is heated by passing a current of 6 mA. The time taken for the withdrawal of tail was recorded before the administration of the compounds and for 30, 60, 90 and 120 min after administration of compounds. The cut off time for determination of latent period was taken as 40 s to avoid the injury to the skin and based on our pilot studies. One group served as a standard (pentazocine hydrochloride) with dose of 10 mg/kg body weight and another group served as control (1% Tween-80) and rest of the groups used for the test drugs. The test compounds and pentazocine hydrochloride were suspended in 1% Tween-80 which was used as vehicle for the control group. The tested compounds were administered at the dose of 30 mg/kg in the form of suspension and administered intraperitoneally. The results of analgesic activity are shown in Table 3.

Table 3: Results of analgesic activity of the synthesized compounds

The CNS depressant activity [13] of the compounds was studied on mice using actophotometer. Animals of either sex weighing 25-30 g were divided into groups of six each. The actophotometer counts for 10 min were recorded by placing the animals in the actophotometer, which gives the initial reading. The compounds were administered intraperitonially in the form of suspension prepared in 1% Tween-80 at a dose of 30 mg/kg body weight. Each group served as its own control. Diazepam was administered as standard to one of the test group at a dose of 5 mg/kg body weight. After 30 min and 60 min of administration of test compound, the actophotometer counts were noted for 10 min. Decrease in the number of counts for each group was recorded and fi nally, the percentage CNS depressant activity was determined. The results of CNS depressant activity are shown in Table 4.

Table 4: Results of cns depressant activity of the synthesized compounds

Some of the synthesized compounds were also tested for muscle relaxant activity [14] (muscle grip strength) in mice using rotorod apparatus. The animals were trained to remain on the rotating rod (moving at speed of 25 rpm) for 5 min. The animals which were able to remain on the rotating rod for 5 min and above were selected for study and were divided into groups of six each. The compounds were administered intraperitonially at a dose of 30 mg/kg body weight in the form of suspension in 1% Tween-80 while one group received diazepam as a standard drug at a dose of 4 mg/kg body weight. After 30 min, the mice were placed again on the rotating rod and animal’s fall off time was recorded. The percentage muscle relaxant activity was calculated and the results are shown in Table 5.

Two new series of compounds namely substituted azetidinones (3a-x) and thiazolidinones (4a-h) possessing fl uoro-benzothiazoles have been synthesized by using experimental protocol as shown in Scheme 1. All the derivatives were supported by spectral data. The IR, 1H-NMR and Mass spectra are in agreement with the proposed structures. 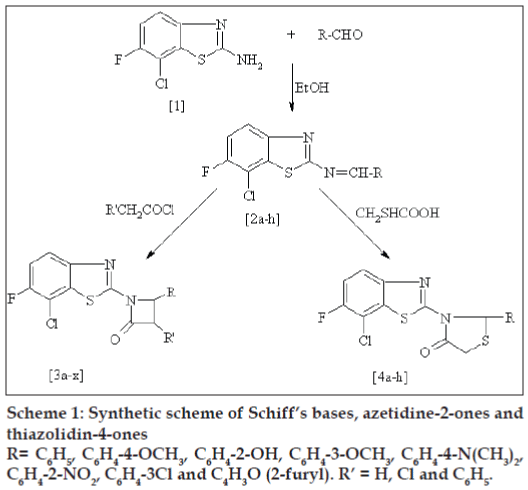 The result of the antiinflammatory activity summarized in Table 2 indicated that 3-chloroazetidinones showed better activity among the tested compounds. Further the presence of ortho substituted aryl ring at 4th position of azetidinones moiety increased the anti infl ammatory activity. Substitution of chloro group with phenyl ring at 3rd position of the azetidinone generally causes decrease in the activity. Among the thiazolidinones, 2-nitro phenyl attached to 5th position of thiazolidinone ring showed maximum activity.

Authors are thankful to the Professor and Chairman, Department of Studies in Biochemistry, for providing laboratory facilities and the Board of members, National Education Society and National College of Pharmacy, Shimoga, for providing facilities to conduct pharmacological activities.