In the present investigation mefenamic acid prodrug of β-cyclodextrins was synthesized. The primary hydroxy group of β-cyclodextrins was used to block the acid group. The synthesis involved a series of protection and deprotection reaction. The ester was evaluated for stability in simulated gastric and intestinal fluid. The hydrolysis of cyclodextrin conjugate in colon is confirmed by the hydrolysis kinetics studies in rat faecal material. The ester was also evaluated for ulcerogenicity. Results of these studies established the primary aim of masking the ulcerogenic potential of free drug, by using 12-fold dose of the normal dose of mefenamic acid and equivalent doses of the ester.

Cyclodextrins (CDs) belongs to family of cyclic-oligosaccharides; the most common being α-, β- and γ-CDs consisting of 6, 7 and 8 glucopyranosyl units, respectively, linked by a (1→4) glucosidic bonds [1]. CDs are obtained by enzymatic degradation of starch, glucosyl transferase a type of amylase of bacterial origin obtained usually from Bacillus macerans, Bacillus megaterium, Klebsiella pneumoniae M5, and Bacillus sterothermophillus. CDs are moderately soluble in water, methanol and readily soluble in strongly polar aprotic solvents [2]. After oral administration, CDs are not hydrolyzed during their transit through the stomach, hydrolysis occurs only in colon by colonic microflora. The oral administration of CDs does not result in toxicity [3,4].Thus, CDs were thought to be one of the most suitable promoieties to reduce the ulcerogenic tendencies of mefenamic acid since they eliminate the exposure of free drug in stomach and small intestine but release the drug in colon.

Mefenamic acid is a nonsteroidal antiinflammatory and analgesic compound belonging to the family of N-aryl anthranilic acid. It is also described as 2- [(2,3Dimethylphenyl) amino] benzoic acid. The main side effects include GIT disturbance, peptic ulceration and gastric bleeding. Mefenamic acid is widely used in rheumatic disorders such as ankylosing spondilytis, osteoarthritis and rheumatoid arthritis.

The major factor, which limits the use of mefenamic acid, is its gastric effect due to local irritation of gastric mucosa by free -COOH group of the drug [5-7]. Hence efforts have been made to mask the free -COOH group by the primary hydroxyl group of CD and releasing the drug in colon and preventing the exposure of free drug to the stomach.

All melting points were determined by open capillary method and are uncorrected. TLC ascertained the purity of of the compounds precoated silica gel-60 F254 plates. Solvent used was butanol:ethanol:water:acetic acid (3:2:3:0.1). Thus different spots for reference and test substance were detected using iodine vapours or by charring the plates using 5% methanolic sulfuric acid. The final compound was re-crystallized from water, after extracting the impurities re-crystallized from water, after extracting the impurities compound was recorded on a FT-IR spectrophotometer, in potassium bromide (anhydrous IR Grade) pellets. The NMR spectra of the synthesized compounds were determined on a FT-NMR spectrophotometer. The λmax of the synthesized compounds was determined on UV/Vis compounds between 400-200 nm in various solvents. Mefenamic acid was obtained as a gift sample from P&B Laborotries, Mumbai. CDs were obtained as gift sample from S. A. Pharmachem, Mumbai. All the other chemicals used were of synthetic grade.

Acetylated monotritylated ß-CD (0.0036 mol, 6 g) was dissolved in N, N-dimethyl formamide (DMF, 200 ml) in round bottom flask. The cation exchange resin *T-63 MP) (d) (3 g) was added slowly into the reaction flask. The reaction mixture was stirred at room temperature and TLC ascertained reaction completion. The reaction mixture was concentrated under reduced pressure to avoid charring of the carbohydrate material. The residue was refluxed with n-hexane in order to remove trityl alcohol liberated during reaction. After complete removal of trityl chloride traces of solvents were removed under vacuum. The residue obtained was subjected to esterification reaction. [*T-63 (MP) Tulsion Thermax is a catalyst grade strong acid cation exchange resin] 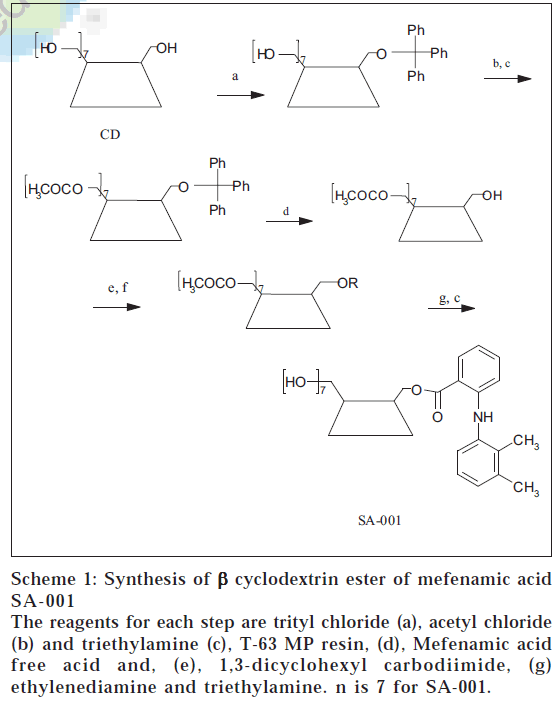 Same procedure was followed for the synthesized ester, ß-CD ester was dissolved in HCl buffer and in phosphate buffer so that the final concentration of the ester is equivalent to 1 μg/ml of mefenamic acid. To each of the flasks of dissolution apparatus (Veego Scientific DA 6D model) 900 ml of buffer was added when the temperature reached 37±1°C the ester solution was added to the flask and stirred at 100 rpm. The ester showed negligible release in both the hydrolysis media.

The ester was dissolved in phosphate buffer (pH 7.4) so that final concentration of solution was 250 μg/ml. Fresh fecal material of rats was weighed (about 1 g) and placed in different sets of test tubes. To each test tube, 1 ml of the ester solution was added and diluted to 5 ml with phosphate buffer (50 μg/ml). The sets of test tubes were incubated at 37° for different intervals of time. For analysis the free drug was extracted in 5 ml CHCl3 and directly estimated on double beam UV-spectrophotometer (Jasco, V-530 model, Japan). The concentration of free drug was determined using K and b values obtained from calibration curve.

The animal study protocols have met with the Institutional Animal Ethics Committee’s (IAEC) approval. Carrageenan- induced rat hind paw oedema method was used for determining antiinflammatory activity [13]. Sprague Dawley rats of either sex (150-200 g) were taken in groups of six animals each. The synthesized compound was suspended in 1% solution of carboxy methyl cellulose (CMC) in distilled water. For control 1% solution of CMC in distilled water was given orally. Mefenamic acid 20.0 mg/kg was used as reference drug. Thirty minutes after the drug administration, 0.1 ml of 1% w/v carrageenan solution was injected in the plantar region of the left hind paw of the animals. The inflammation was determined using a plethysmograph 3 h after injecting the phlogistic agents and compared with that of the control. The data was analyzed using student’s “t” test and the level of significance was defined at p<0.05.The results are summarized in Table 2.

SA-001, Mefenamic acid (20.0 mg/kg or equivalent) and vehicle were administrated orally to Wistar rats and corresponding parameters were measured after specific time intervals after inducing either inflammation or hyperalgesia with carrageenan

The analgesic activity was evaluated by acetic acid induced writhing method [14]. Albino mice of either sex with a weight range between 20 and 25 g were used. Acetic acid (0.6%) was used as irritant and 0.25 ml of this solution was injected intraperitoneally. An aliquot of groups of 6 animals were used for control and treated mice. Test animals were administered the drug or the standard at various pretreatment times prior to administration of acetic acid. The mice were placed individually into glass beakers and five minutes were allowed to elapse. The mice were then observed for a period of ten minutes and the number of writhes was recorded for each animal. For scoring purposes, a writhe is indicated by stretching of the abdomen with simultaneous stretching of at least one hind limb. The time period with the greatest percent of inhibition is considered the peak time. Compounds with less than 70% inhibition are considered to have minimal activity. The results are given in Table 2.

Ulcerogenicity was determined by the method reported by Rainsford et al. [15] According to this method sensitivity of gastric mucosa to ulcerogenic -COOH group is increased by exposing the animals to a short period of physical stress (i.e., cold or restraint) [15]. Wistar rats of either sex (150-200 g) were selected. They were kept for fasting for 24 h. Following oral administration of drug that is 10 times the normal dose in case of test and vehicle dose in case of control, the animals were stressed by exposure to cold (-15° for 1.5 h). The animals were sacrificed 3 h after drug administration and the number and severity of gastric mucosal lesions were determined. The results are summarized in Table 2.

The studies have revealed that the CD ester of mefenamic acid has retained its pharmacological activity in terms of % inhibition of oedema and in acetic acid induced writhing method and it was compared with that of its parent compound. After 1 h all the animals were observed for the writhing. Since the prodrug would not hydrolyze in the first 1-2 h as the prodrug probably be in the stomach or duodenum in this time interval hence all the results are statistically insignificant. For the ester the maximum activity was obtained after 6 h showing that absorption of drug does not occur in stomach. Ulcerogenicity studies showed that ester is not ulcerogenic (Table 2). The photographic presentation of ulcers is depicted in fig. 1. In vitro hydrolysis studies have shown that the ester is quite stable in simulated gastric and intestinal fluid where as it is hydrolyzed almost completely in rat faecal contents representing the colon. Although, this is the method of confirming the hydrolysis of ester in colon, it gives an idea about the behavior of ester in gastrointestinal tract. This can be further confirmed by improved analysis, one approach to it is to isolate the specific strain of microorganism responsible for hydrolysis of CD and study the hydrolysis of conjugates in presence of them. The present study clearly indicates that conjugation of ß-CD with mefenamic acid is a good method of masking the COOH group and thus reducing the ulcerogenicity, a major drawback. The synthesized compound need to be further studied before being considered as potentially useful prodrugs. Figure 1: Photographs of ulcers produced by mefenamic acid and Top panel shows the ulcerogenic effect of mefenamic acid treatment while the bottom panel depicts that after treatment behavior of ester in gastrointestinal tract. This can be further confirmed by improved analysis, one approach to it is to isolate the specific strain of microorganism responsible for hydrolysis of CD and study the hydrolysis of conjugates in presence of them. The present study clearly indicates that conjugation of ß-CD with mefenamic acid is a good method of masking the COOH group and thus reducing the ulcerogenicity, a major drawback. The synthesized compound need to be further studied before being considered as potentially useful prodrugs. SA-001 with SA-001

Authors are thankful to S. A. Pharmachem Pvt. Ltd., Mumbai and P & B Laboratories., Mumbai, for providing the gift samples of cyclodextrin and mefenamic acid.