Chalcones were synthesized by reacting indole-3-aldehyde, prepared by Vilsemeir Haack reaction with 4-substituted acetophenone in ethanolic KOH solution. These chalcones were immediately reacted with hydroxylamine hydrochloride in presence of glacial acetic acid as reagent to obtain the corresponding isoxazole derivatives. The synthesized heterocycles were characterized on the basis of physical, chemical tests and spectroscopic data. These compounds were tested for the acute antiinflammatory activity and antibacterial activity using carrageenan-induced rat paw edema method and cup-plate method, respectively.

Isoxazoles were reported for their various biological activities [1-3]. The reactive intermediate chalcones involved in their synthesis also exhibit wide range of biological activities [4-6]. The ability of indole to exhibit antiinflammatory, antimicrobial, antifungal activities [7-9] prompted the selection of indole as starting compound. In the light of these interesting biological activities, it appeared of interest to synthesize some new indolyl-isoxazole derivatives and to evaluate their antibacterial and antiinflammatory activities. Indole-3-aldehyde (2) prepared using Vilsemeir Haack reaction by reacting indole (1) with substituted acetophenones (a-j) in ethanolic KOH to obtain chalcones (3a-j), which were condensed with hydroxylamine hydrochloride in presence of sodium acetate and glacial acetic acid to obtain isoxazoles (4a-j). The synthetic sequence leading to the formation of targeted compounds is depicted in Scheme 1. 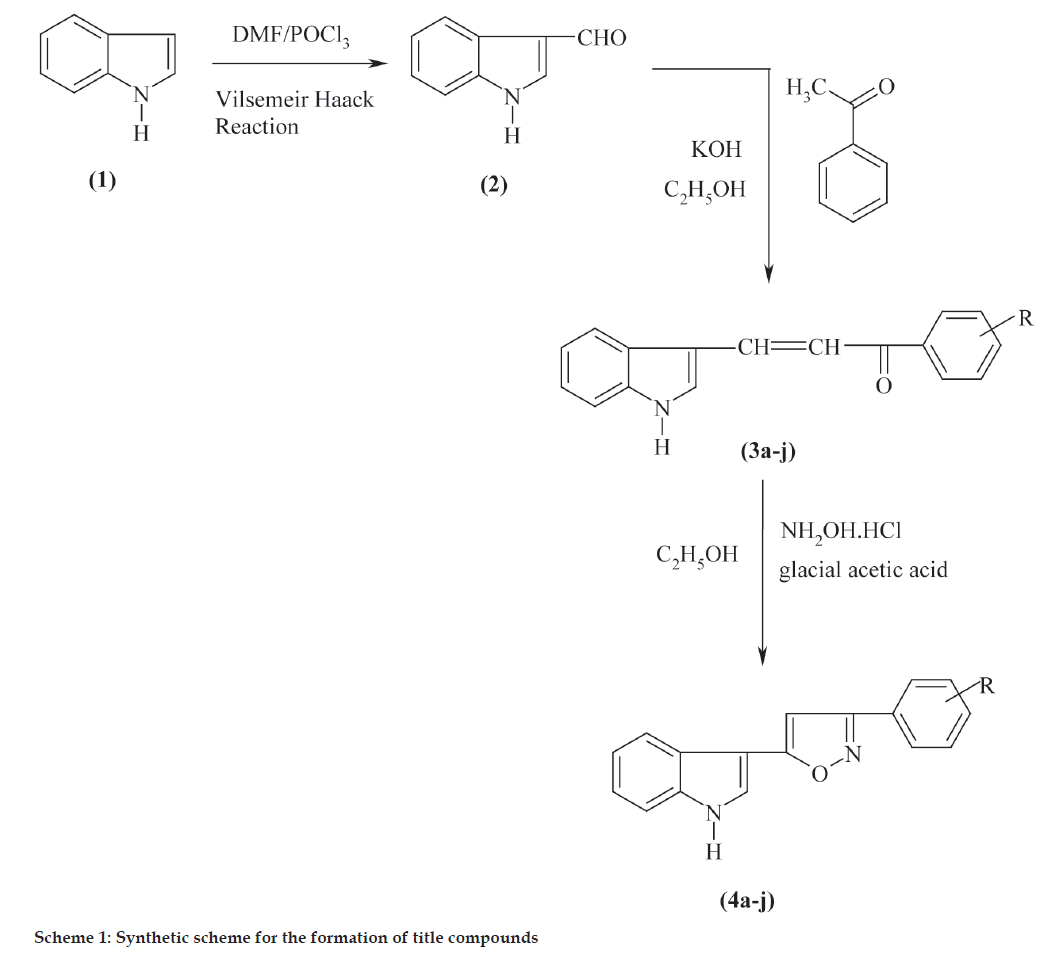 All the synthesized compounds were recrystallized from ethanol and * solvent system in TLC was chloroform:methanol (8:2)

Antiinflammatory activity was measured using the carrageenan-induced paw edema test in rats [11]. Animals were divided into different groups each consisting of six animals. Out of twelve synthesized compounds, five compounds (4a, 4c, 4f, 4g, 4j) were selected as test compounds and standard ibuprofen were administered orally at a dose of 200 mg/kg as an aqueous suspension in 1% CMC, while the control group was fed with the same volume of 1% CMC suspension. The paw volume were measured using a plethysmograph immediately before and 3 h after the carrageenan injection. The percent inhibition of paw volume was calculated by using the formula, percent inhibition= (1-Vt/Vc)×100, where Vt is the mean volume of the test drug, Vc is the mean volume of the control Table 2. The one-way ANOVA (Scheffe's method [12]) test was applied, and the test compounds were found to be significantly active compared to the control (P <0.05). The institutional animal ethics committee of Kasthurba Medical College has approved the experimental protocol (No. IACE/ KMC/030/2004-05).

All compounds synthesized (4a-4j) were screened for antibacterial activity using the cup-plate agar diffusion method [13] by measuring the zone of inhibition in mm. Ciprofloxacin (50 mg/ml and 100 mg/ml) was used as standard for antibacterial activity. The compounds were screened for antibacterial activity against S. aureus, B. subtilis, E. coli and P. aeruginosa in Muller-Hinton agar medium. This sterilized agar medium was poured into Petri dishes and allowed to solidify. On the surface of the media microbial suspensions were spread with the help of sterilized triangular loop. A stainless steel cylinder of 8 mm diameter (pre-sterilized) was used to bore the cavities. All the synthesized compounds (50 mg/ml and 100 mg/ml) were placed serially in the cavities with the help of micropipette and allowed to diffuse for 1 h. Dimethylsulfoxide (DMSO) was used as a solvent for all compounds and as control. The plates were incubated at 37° for 14 h. The zone of inhibition observed around the cups after incubation was measured. The results are presented in Table 3.

*Indicates concentration of drug in μg/ml. Zone of inhibition in mm

The authors are thankful to IIT-Chennai for carrying out PMR study. We are also grateful to the Principal, Manipal College of Pharmaceutical Sciences, Manipal, for providing all the facilities.