Synthesis, Antiinflammatory and Antimicrobial Activity of Some New 1-(3-Phenyl-3,4-Dihydro-2H-1,3-Benzoxazin-6-yl)-Ethanone Derivatives

Synthesis of title compounds (4a-j) was carried out by following aminomethylation Mannich reaction. Test compounds were effective in inhibiting edema induced by carrageenan. The percent inhibition obseved was in the range of 25-83.3%. Compound (4c, e, h and j) were also tested for analgesic effect and showed percent protection ranging between 57-65%. All the synthesized compounds were active against E. coli and S. aureus but only compounds (4 b, c, e, i and j) were active against B. subtilis. All these compound were also found active against A. niger. Compound 4j was the most active compound with 83.3% inhibition of edema, 65.35% percent protection and inhibited all the three bacterial strains.

Research and development of potent and effective antimicrobial agents represents one of the most important advances in therapeutics, not only in the control of serious infections, but also in the prevention and treatment of some infectious complications of other therapeutic modalities such as cancer chemotherapy, surgery and hospital aquired infections. Benzoxazine and benzoxazinone based compounds (fig. 1) forms an important class of benzfuzed heterocyles with wide spectrum of biological activities and are in the development phase as potential new drugs. Benzoxazines are reported to exhibit antiinflammatory [1,2], analgesic [3], antibacterial [4,5], neuroprotective [6], D2 receptor antagonistic activity [7]. Compounds 1 and 2 (fig. 1) are reported to inhibit bacterial histidine protein kinase, compound 3 exhibited potential for treating heart disease, myocardial necrosis or arrhythmia [8]. 1,3-Benzoxzines (Compounds 4 and 5) have been reported to possess antimycobacterial activity [8,9]. Compounds possessing dual biological activities like antiinflammatory and antimicrobial, anticancer and immunostimulant have received greater attention lately. The dual activity of compounds will be of interest in case of diseases associated with microbial infections in particular. Therefore, we have made attempts to design and develop compounds with dual activities i.e. antiinflammatory and antimicrobial activities. In this paper we report the synthesis of title compounds by condensation of different aromatic amines in presence of formaldehyde with different substituted phenols following Mannich type aminomethylation and their antiinflammatory, analgesic and antibacterial activity.

Fig. 1: Various benzoxazines and benzoxazinones at different stages of development

1-(3-Phenyl-3,4-dihydro-2H-benzo[e][1,3]oxazin-6- yl)-ethanone derivatives described in the study are shown in Table 1 and the reaction sequence for the preparation are outlined in Scheme 1. The required intermediate 4-hydroxy-2-methyl acetophenone (2) was synthesized by Friedel Craft acylation of m-cresol. Final compounds (4a-j) were obtained by Mannich type aminomethylation reaction by condensing compound 2 or 4-hydroxy acetophenone with different primary aromatic amines (3) in presence of formaldehyde in 56-71% yield. Structures of compounds was ascertained by 1HNMR, IR and Mass spectra. In general, Infra Red spectra (IR) revealed C=O and C-N peak around 1696 and 1320 cm–1, respectively. In the Nuclear Magnetic Resonance spectra (1H NMR) the signals of the respective protons of the prepared compounds were verified on the basis of their chemical shifts, multiplicities and coupling constants. The peak for NCH2 and OCH2 groups of oxazine ring was observed from δ 3.87-4.6 and δ 4.95-5.51 ppm, respectively confirming the formation of benzoxazine ring.

All the reagents and solvents used were procured from E Merck (India) Ltd and used as such. Melting points were determined in open-end capillary tubes using Kjeldhal flask containing liquid paraffin and are uncorrected. The purity of the compounds was monitored by ascending thin layer chromatography (TLC) on silica gel G (Merck), in the solvent system toluene–ethyl formate–formic acid (5:4:1) and ethylacetate:hexane (2:8). Spots were located under iodine vapors or UV radiations. IR spectra were recorded in KBr on Perkin-Elmer 1720 FTIR spectrometer and proton nuclear magnetic resonance (1HNMR) spectra were recorded on Brucker Avance (300 MHz) spectrometer using TMS as internal standard in CDCl3/DMSO-d6. Chemical shifts are reported in parts per million (ppm) using tetramethyl silane (TMS) as an internal standard. Mass spectra were recorded on JEOL 5x102/DA-6000 Mass Spectrometer/Data system using Argon/Xenon (6kV, 10mA) as the FAB gas.

All the newly synthesized compounds were screened for their antiinflammatory, analgesic and antibacterial activity. The Institutional Animal Ethics Committee (IAEC) has approved protocols of animal experiments. The antiinflammatory activity of the synthesized compounds (4a-j) was carried out on Wistar rats by Winter et al. method [10] using indomethacin as reference compound. Animals were grouped as 6 animals per group. The compounds were adminstered orally as suspension of 1% CMC in dose equimolar to 20 mg/kg of indomethacin. The percent edema inhibition relative to control was measured after 3 h of the carrageenan injection using digital plethysmograph (Ugo Basile). The inhibition of swelling in carrageenan-induced edema in rat paw brought about by oral administration of the drugs is shown in Table 2. The percentages of inhibition of swelling brought about by the test compound were calculated using the formula, inhibition (%)= {[(Vt-Vo) contol–(Vt-Vo)treated]/(Vt-Vo)contol}×100, where Vt and Vo relates to the average volume in the hind paw of the rats (n=6) before and after administration of a test compound. The one way ANOVA test was applied and test compounds were found to be significatly active compared to the control.

Compounds, which showed more than 65% of inhibition in swelling induced by carrageenan, were tested for their analgesic activity. Analgesic activity was carried out on compounds (4c, e, h, j) using albino mice by Seigmund et al. method [11] at the same dose as used for antiinflammatory activity. The percent protection in mice brought about by administration of the drugs is shown in Table 2. The percent protection was calculated using the formula, Protection (%) = (100–(number of writhings in test/ number of writhing in control))×100.

Compounds synthesized were also screened for their antibacterial activity against E. coli, S. aureus and B. subtilis bacterial strains and antifungal activity against A. niger by cup plate method using ofloxacin and fluconazole as standards [12], respectively. The screening was carried out at a concentration of 50 μg/ml. Solutions of required concentration of test compounds were prepared by dissolving the compounds in DMF. Nutrient agar was used as medium and DMF was used as control. The zone of inhibition was compared with standard drugs after 24 h of incubation at 25° for antibacterial activity and 48 h at 30° for antifungal activity. The zone of inhibition obtained for the test compounds and reference compounds are presented in Table 2 and fig. 2. 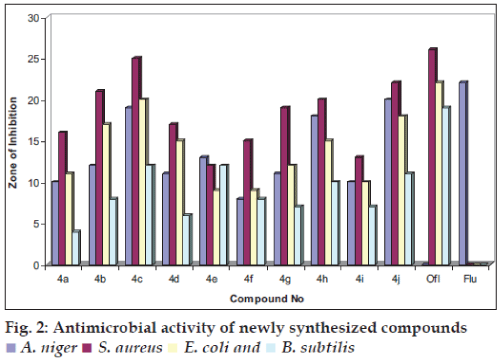 Compounds tested for antiinflammatory activity showed inhibition of edema induced by carrageenan injection ranging from 25 to 83.3%. Compound 4j was found to be most potent compound with 83.3% inhibition of edema, which is more than the standard (79.5%) and 4e was found equipotent to the standard. The compounds tested for analgesic activity showed protection in the range of 53–66%, and the compound 4j was the most active (65.35%) among all. indomethacin was used as standard and the percent protection observed was 66.25%. All the synthesized compounds were tested for antibacterial and antifungal activity. All the test compounds inhibited E. coli, S. aureus and A. niger but only compound (4c, 4e, 4j) were potent in inibiting growth of B. subtilis. Compound (4c, 4h, 4j) showed zone of inhibition 19, 25 and 20 mm, 18, 20, 15 mm and 20, 22, 18 mm against A. niger, E. coli and S. aureus, respectively were found comparable to standard drugs with 22, 26 and 22 mm zone of inhibition respectively.

One of the authors Mymooona Akhter is thankful to UGC for financial support. The authors are grateful to Janab Abdul Mueed Sb. for providing infrastructure and facility to carry out this work.