Rheumatoid arthritis is a chronic inflammatory disorder which affects 1-2% of the total world population, commonly leads to significant disability and a consequent reduction in quality of life [1]. The available antirheumatic drugs include NSAIDs, drugs acting on cytokines and disease modifying antirheumatic drugs (DMARDs) [2]. Treatment using NSAIDs, only provide symptomatic relief. TNF-α is a cytokine and inhibitors of this cytokine eg. Etanercept, Infliximab and IL-1 inhibitor anakira, which act on cytokines, have demonstrated clinical efficacy in the treatment of rheumatoid arthritis. But treatments with these agents are costly and require parenteral administration [3]. Even though DMARDs (e.g., methotrexate, cyclosporine) inhibit the disease progression, the adverse effects of these drugs are very unpalatable [4,5]. The unmet medical need calls for drug discovery programs for discovery of drugs which inhibit the disease progression, which are safe and with oral bioavailability.

Our earlier drug discovery program for the treatment of inflammatory disorders found the template of substituted 2-amino thiazol-5-yl-oxo (fig. 1A) ideal for designing drugs for inflammatory disorders [6]. There are several literature reports which highlight the fact that when 2 “minimum structural features necessary for activity” are incorporated into one single molecule the activity increases many folds [7,8]. Novel bisquinoline analogue (I) with chloroquinelike features was found to inhibit both chloroquine sensitive and resistant P. falciparum malarial parasites (IC50 -17 nM in resistant strains as compared to chloroquine which was 540 nM) [9]. Another example is the bis-(difluro methylene phosphonate) analogue which was more active as a protein tyrosine phosphatase 1B inhibitor as compared to the monophosphonate [10]. Literature nowadays is replete with instances of such idea. Applying this strategy to the template we synthesized a series 1,2-bis [5- thiazolyl]ethane-1,1-diones as antiinflammatory agents.

Integrase (IN) has emerged as an attractive target, because it is necessary for stable infection and homologous enzymes are lacking in the human host [11]. The function of IN is to catalyze integration of proviral DNA, resulting from the reverse transcription of viral RNA, into the host genome. This is achieved in a stepwise fashion by endonucleolytic processing of proviral DNA within a cytoplasmic preintegration complex (termed 3’ P-processing or “3’-P”), followed by translocation of the complex into the nuclear compartment where integration of 3’-processed proviral DNA into host DNA occurs in a “strand transfer” (ST) reaction. Although numerous agents potently inhibit 3C’-P and ST in extracellular assays that employ recombinant IN and viral long terminal repeat oligonucleotide sequences, often such inhibitors lack inhibitory potency when assayed using fully assembled preintegration complexes or fail to show antiviral effects against HIV infected cells. Recently, however, a class of IN inhibitors has emerged, typified by an aryl-diketo motif. Variations of this structural theme have been utilized by Shionogi and Merck pharmaceutical companies to prepare inhibitors (for example, L-708,906) which potently block integration in extracellular assays and exhibit good antiviral effects against HIVinfected cells. (fig. 1B) [11,12]. The presence of diketo pharmacophore in the synthesized compounds made us to screen these compounds in a HIV-1 integrase inhibitory assay.

Phenyl isothiocyanate was procured from Lancaster. Methyl isothiocyanate was gift sample from Hitesh Chemicals and Drugs Pvt Ltd, Hyderabad, India. Benzoylisothiocyanate, methoxycarbonyl isothiocyanate, ethoxy carbonyl isothiocyanate, N,Ndiethyl actamidine, N,N-diethyl benzamidine, N,Ndiethylphenyl acetamidine and 1,4-dibromo butane 2,3-dione were prepared in our lab following the reported procedures [13-17]. Carrageenin was procured from Spectrochem India limited. HIV-1 integrase assay was done at Department of Pharmaceutical Sciences, School of Pharmacy, University of Southern California, Los Angeles, USA [18]. The reported protocol was followed for carrageenin-induced rat paw edema method [19] for evaluation of antiinflammatory activity. All compounds were screened in a group of 6 animals at dose of 100 mg/kg body weight of the animal. The experimental protocol was approved by the institutional animal ethics committee, constituted as per CPCSEA, Government of India.

General method of preparation of intermediates with amidines, Scheme 1

The scheme reported by Rajappa et al. was utilized for the synthesis of the target molecules [20-23]. Various isothiocyanates were reacted with N,Ndiethyl acetamidine, N,N-diethyl benzamidine, N,N-diethyl phenylacetamidine to give the adducts. Some other adducts were synthesized by reacting benzoylisothiocyanate with corresponding secondary amines. The final compounds were synthesized by the reaction of 1,4-dibromo butane-2,3-dione, with the adducts. For preparation of adducts, the isothiocyanates were stirred with amidines in toluene at 0°. The solid that separated was filtered washed with cold toluene and dried. 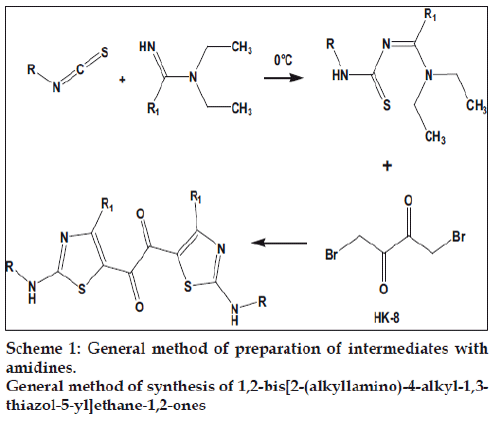 General method of preparation of intermediates with secondary amines, Scheme 2

The solution of benzoyl chloride and ammonium thiocyanate in acetone in a round bottom flask attached with a reflux condenser, were refluxed for 15 min. To this corresponding secondary amine was added and refluxing was continued for another 2 h. After cooling the reaction mixture was poured into excess ice cold water. The solid that separated was filtered and dried to obtain the intermediates. 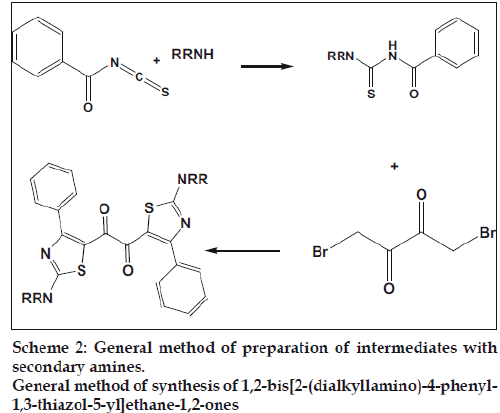 1,4-Dibromo butane-2,3-dione was prepared by modification of a reported method. In a three necked round bottomed flask, 10 ml CHCl3 was taken. In separating funnels diacetyl (20 g, 0.23 mol) and bromine (37.2 g, 0.46 mol) were taken in 50 and 30 ml CHCl3, respectively. Both the solutions were added drop wise simultaneously into the flask by keeping a little excess of bromine in the flask throughout the addition. Disappearance of bromine colour was observed during the reaction. The orange colour solution was kept at 0° for 8 h. The solid that separated was filtered. The filtrate was washed with NaHCO3 solution dried and concentrated to get II crop 1,4-dibromo butane-2,3-dione. Yield 71%, mp 170°.

General procedure for synthesis of the final compounds

Two equivalents of adduct and one equivalent of 1,4-dibromo butane-2,3-dione was dissolved in acetonitrile and stirred for 24 h, the solid that separated was filtered, washed with NaHCO3 and recrystalised from DMF/acetonitrile mixture. The physical data of all the synthesized compounds is presented in Table 1.

*Indicates that these compounds have melting point higher than 300º

Many enzymes exist as dimers in their active form. This may be the reason that the dimerised pharmacophores shows better activity by binding through the appropriate epitopes in a facile manner at the dimeric binding site of the macromolecule. Here we dimerised the pharmacophore showing antiinflammatory activity developed in our laboratory (Tables 2 and 3). Most of the dimeric compounds showed better antiinflammatory activity than their parent monomer type compound. Few compounds like G-6, G-7, G-8, G-12, G-16, G-17, G-18, G-19, G-20 and G-21 gave protection by more than 50% in the carrageenan rat paw model. The compounds with a bulky and lipophilic group at the 2 and 2’ position showed excellent antiinflammatory activity. However, representative examples of these classes of compounds did not have any effect on TNF-α release from human peripheral blood mononuclear cells (G-6, G-17, G-19) and one compound weakly inhibited cPLA2(G-6).

In the integrase assay few compounds showed weak activity (Table 4). The pharmacophore of the reported compounds contains hetero aryl ring connected by a linker containing diketo functionality. The weak activity of our compounds may be due to the fact that in the reported potent HIV-1 integrase inhibitors, besides the diketo moiety an additional carboxylic acid moiety is present and this feature may also be necessary for good antiintegrase activity. In conclusion the good antiinflammatory activity shown by G3, G6, G7 and G12 seem to indicate the utility of this framework as a lead with a potential to optimize to a developable drug-like candidate to treat inflammatory diseases.

No other compounds showed any activity in concentration range 500 μm