Thioureido derivatives of sulfonamides (5a-f) Series-I and thiosemicarbazido derivatives of coumarins (10a-d) Series-II were synthesized. The identities of the compounds were confirmed on the basis of their spectral data and were screened for their anticonvulsant and analgesic activity. The compounds 5a and 10c showed maximum activity against MES test, whereas compounds 10b, 10c and 10d showed highly significant analgesic activity.

The sulfonamides possess versatile activities like antibacterial [1], carbonic anhydrase inhibitor [2], anticancer [3], anti-inflammatory [4], antiHIV [5], COX-2 inhibitor [6], selective 5- HT receptor antagonist [7], antitubercular [8] and antifungal [9]. The drugs containing coumarin nucleus are used for a variety of conditions such as inhibition of concanavalin A [10], AChE and MAO [11]; and they are antiinflammatory [12] and antiHIV [13]. The literature survey reveals that sulfonamides and coumarin moieties are important pharmacophores and exhibit outstanding biological properties. Several sulfonamide carbonic anhydrase (CA) inhibitors such as acetazolamide, methazolamide, topiramate and zonisamide were and are still used as antiepileptic drugs [14]. Thiosemicarbazides are already reported to have anticonvulsant activity [15-18]. However, little is known about substituted sulfonamides with thioureido group, and coumarins with thiosemicarbazido group. The combined presence of sulfonamide with substituted thioureido group, and coumarin moiety with substituted thiosemicarbazido moiety may produce CNS activities. It prompted us to synthesize newer derivatives by incorporating a substituted thioureido moiety in sulfonamide moiety and substituted thiosemicarbazido moiety in coumarin moiety. The presence of thioureido group is expected to impart potential CNS activities with more lipophilicity. It was therefore proposed to synthesize some promising analgesic and anticonvulsant agents. These synthesized compounds were evaluated for analgesic and anticonvulsant activity. Some of the compounds were found to possess highly significant activity.

All the solvents used were of LR grade and were obtained from Merck, CDH and S. D. Fine Chemicals. The required 4-acetamidobenzenesulphonyl chloride was obtained from Merck. Thin-layer chromatography was performed on silica gel G (Merck). Melting points were determined in open capillary tubes and are uncorrected. The FT-IR spectra were recorded in KBr pellets on (BIO-RAD FTS 135) FTIR spectrophotometer, 1HNMR spectra in (DMSO-d6) on a Bruker model DRX-300 NMR spectrometer using TMS as an internal standard. The chemical shifts are reported in δ ppm scale. Mass spectra were recorded on Bruker Daltonics DataAnalysi esquire 3000_00037. The elemental analysis for C, H, N and S were within the limit of ±0.4% and ±0.3%, respectively.

The compound p-chloroaniline 1a (1.27 g, 0.01 mol) was taken in a mixture of pyridine 4 ml and acetic anhydride 20 ml. To this mixture, p-acetamidobenzenesulphonyl chloride 2 (2.33 g, 0.01 mol) was added and mixture was heated for 2 h on a water bath. The reaction mixture was poured into ice-cooled water, and the solid was filtered and crystallized from ethanol (80%) so as to obtain compound 3a, as shown in reaction scheme I.

The compound 3a (2.57 g, 0.008 mol) was hydrolyzed by boiling it in 50 ml of 80% acetic acid for 6 h to obtain the product 4a.The reaction mixture was poured into icecooled water and solid was filtered. The dried solid was crystallized from ethanol. 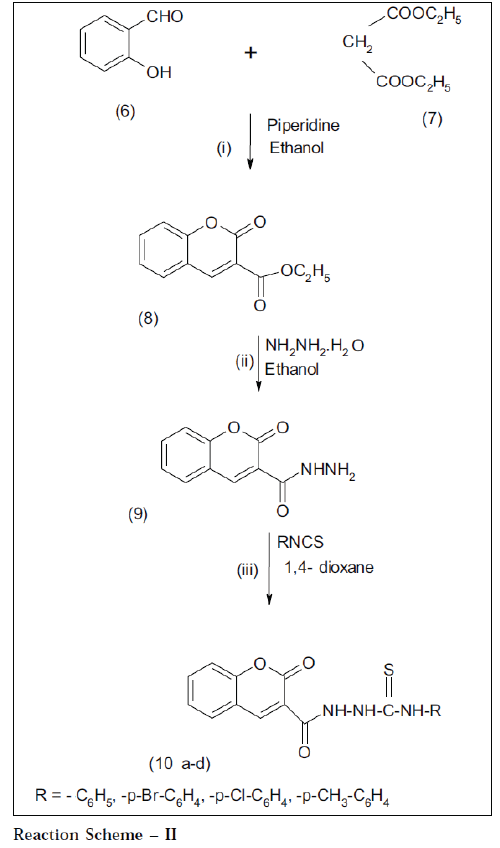 The anticonvulsant activity was performed according to the method of Krall et al [19] on Swiss mice of either sex weighing between 25 and 30 g, kept under standard condition at an ambient temperature of 25±2°. Food and water were withdrawn prior to the experiments. The suspension of standard drug and test compounds were prepared in 0.5% CMC. Phenytoin (20 mg/kg) and test compounds (20 mg/kg) were administered orally. After 1 h, they were subjected to supramaximal electroshock of current intensity 50 mA, 60 Hz for 0.2s duration by electroconvulsometer through corneal electrodes, and presence or absence of extensor response was noted. Animals in which extensor response was abolished were taken as protected mice.

The analgesic activity was performed according to Naik et al [20] on Swiss mice of either sex, age-2 mo (25-30 g). The Swiss mice were kept under standard conditions at an ambient temperature of 25±2°, and food and water were withdrawn prior to the experiments. The suspension of standard drug and test compounds were prepared in 0.5% CMC. Diclofenac potassium (20 mg/Kg) and test compounds (20 mg/kg) were administered orally. In this method, physical pressure was used as a source of pain. The mice were pre-screened for analgesic action of physical pressure on tail. Only those mice showing biting tendency to clip within 1s were selected. These mice were then divided into 12 groups of 6 animals each. The test compound (20 mg/kg p.o.) suspended in 0.5% CMC was administered orally. After 45 min, the physical pain was produced by applying the clip on the last portion of the 1 cm of tail of mice, and biting tendency to the clip of mice was recorded in seconds as a reaction time. The increase in reaction time against the physical pain after treatment with compounds to be tested was considered as the protective index of the analgesic activity. The percentage increase in reaction time (as index of analgesia) was then calculated. All the animal experiment protocols have met with the approval of the Institutional Animal Ethics Committee.

We are thankful to Director, RRL, Jammu, for mass spectra; IIT, Delhi, for NMR spectra; and CIF Faculty of Science, Jamia Hamdard, for FTIR. One of the authors (M. A. Bhat) is thankful to UGC for awarding GATE fellowship.