Compounds that can induce genetic mutations, chromosomal rearrangements are considered as genotoxic impurities (GTIs). According to current regulatory practices, GTIs have the potential to damage DNA at any level of exposure and such damage may lead/contribute to tumor development. Thus, for genotoxic carcinogens it is prudent to assume that there is no discernible threshold and that any level of exposure carries a risk [1-3]. International Conference on Harmonization (ICH) and The European Medicines Agency (EMA) guidelines provided the limits for impurities in drug substances and drug products, these limits are not acceptable for GTIs due to their adverse affect and hence it is necessary to set up limits based on daily dose of the drug substance [4-6]. To overcome this, scientists have to develop analytical methods and demonstrate the synthetic process controls. However, the relevant strategies are not readily available to all the drug substances or active pharmaceutical ingredient (API) manufacturers. As stated in the Q3A guidelines, potential genotoxic impurities most likely to arise during synthesis, purification and storage of the new drug substance [7-9]. Irbesartan is an angiotensin-receptor blocker (ARB) used mainly for the treatment of hypertension and 2-N-butyl-4-spirocyclopentane-2-imidazoline-5-one (BSI) is the most important intermediate used in the synthesis of irbesartan, which is identified as potential GTI in irbesartan [10,11]. The chemical structures of both irbesartan and BSI impurity are shown in fig. 1. 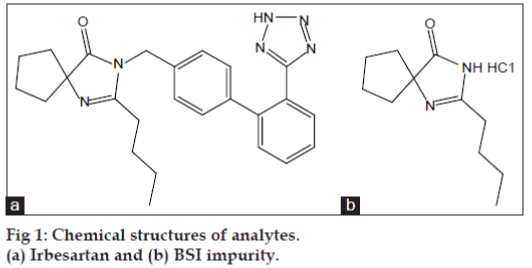 Figure 1: Chemical structures of analytes.
(a) Irbesartan and (b) BSI impurity.

Thresholds for toxicological concern (TTC) value of 1.5 μg/day intake of a genotoxic impurity is considered to be associated with an acceptable risk (excess cancer risk of <1 in 100 000 over a lifetime) for most pharmaceuticals. From this threshold value, a permitted level in the active substance can be calculated based on the expected daily dose. Based on the maximum daily dosage (300 mg) of irbesartan, its GTIs are required to be controlled at a limit of 5 μg/g. Higher limits may be justified under certain conditions such as short-term exposure periods. Determination of these impurities at μg/ml levels requires highly sensitive analytical methodologies, which poses tremendous challenges on analytical communities in pharmaceutical research and development. Several high-performance liquid chromatography (HPLC) methods have been described previously for the determination of irbesartan in pharmaceuticals and biological samples [12-14]. But the combined technique of high-performance liquid chromatography-mass spectroscopy (HPLC-MS) provides the efficient separation capability, good selectivity as well as sensitivity. In recent years, much effort has been put in the development of novel LC-MS methods that are committed to either qualitative or quantitative analysis of analytes and GTIs. To the best of our knowledge no method was reported using LC-MS/MS for the quantitation of BSI in irbesartan, hence an attempt was made to overcome the shortcomings of the existing methods and in developing a highly sensitive, cost-effective, specific, direct, and accurate LC-MS/ MS method.

Stock solutions of BSI (20 mg/ml) were prepared by dissolving the compound in methanol and further was suitably diluted with methanol to give final dilution of 0.5 μg/ml. The working standard solution was prepared by accurately weighing about 50 mg of irbesartan into a 25 ml volumetric flask, to this 100 μl of 0.5 μg/ml diluted stock solution of BSI was added and volume was made upto the mark. This affords 2.0 μg/ml and 2.0 mg/ml of BSI and irbesartan absolute concentrations, respectively, which correspond to 1.0 μg/ml BSI contamination relative to the drug substance. The BSI samples for validation at 0.1, 0.5, 0.75, 1.0, 1.5, and 2.0 μg/ml concentrations relative to the API were prepared in the same manner using 0.5 μg/ml diluted stock solution. The concentration of the standard solutions and samples were optimized to achieve a desired signal-to-noise ratio (S/N) and good peak shape.

Symmetry C18 (100×4.6 mm, 3.5 μm) column (Waters Co, USA) was used with a flow rate of 0.7 ml/min, which split down to 0.2 ml/min into the MS source. The mobile phase used was a mixture of 0.1% formic acid:acetonitrile in the ratio of 65:35 (v/v). The column temperature was 40º and injection volume was 10 μl. Positive electrospray ionization (ESI) probe operated with selective ion monitoring (SIM) mode was used for quantification of BSI. In this method BSI was monitored with its extracted ion m/z 195.2 [(M+H)+] and irbesartan was monitored with its extracted ion m/z 429.2 [(M+H)+] (fig. 2). The ion spray voltage (V), declustering potential (DP), and entrance potential (EP) were optimized as 5000, 50 and 10 V, respectively. The curtain gas flow, ion source gas1 and ion source gas2 nebulization pressure (psi) were maintained as 25, 25 and 30 psi, respectively. All the parameters of LC and MS are controlled by Analyst software version 1.5.2. Figure 2: Mass spectra.
Representative mass spectra of (a) BSI and (b) irbesartan.

Validation study was performed for the quantification of the potentially genotoxic BSI impurity in irbesartan as follows. The assessed parameters during validation were limit of detection (LOD), limit of quantitation (LOQ), linearity, system precision and BSI recovery of spiked samples. The method validation was started by injecting 1.0 μg/ml of individual solution of BSI with respect to 2.0 mg/ml of irbesartan and determining their S/N (signal to noise) ratios. Now, to determine the LOD and LOQ values, BSI concentration is reduced sequentially to yield S/N ratio as 3:1 and 10:1, respectively. Linearity was performed by determining the correlation coefficient for a six point calibration curve, ranging between LOQ and 20×LOQ concentrations. The precision was evaluated at two levels viz., repeatability and intermediate precision. Repeatability was checked by calculating the relative standard deviation (%RSD) of six replicate determinations by injecting six freshly prepared solutions containing 1.0 μg/ml of BSI on the same day. The same experiments were done on six different days for evaluating intermediate precision. A recovery study by the standard addition method was performed to evaluate accuracy and specificity. Accordingly, the accuracy of the method was determined by spiking 0.1, 1.0, and 1.5 μg/ml of BSI separately to three batches of pure irbesartan (2.0 mg/ml). Each determination was carried out six times. The specificity of the method was determined by analyzing the tablets of irbesartan. The robustness of the method was studied with deliberate modifications in flow rate of the mobile phase and column temperature. The flow rate of the mobile phase was 0.7 ml/min, which was altered by 0.2 units i.e., from 0.5 ml/min to 0.9 ml/min. The effect of column temperature on resolution was studied at 38° and 42° instead of room temperature (28°). However, the mobile phase components were held constant as described above. Stability of BSI in methanol was checked by keeping them in an auto sampler and observing the variations in their peak areas at different time intervals.

The aim of the present study was to separate and quantify BSI impurity in irbesartan drug substance using LC-MS/MS. The signal intensity obtained for BSI in positive mode was much higher than that in negative mode. Then, the possibility of using electrospray ionization (ESI) or atmospheric pressure chemical ionization (APCI) sources under positive ion detection mode was evaluated during the early stage of method development. ESI spectra revealed higher signals for the molecule compared to APCI source. Further the method development was therefore limited to ESI source. Chromatographic resolution of BSI and irbesartan was initiated under isocratic conditions to obtain adequate response, sharp peak shape, and a short analysis time. Thus, separation was tried using various combinations of ammonium acetate, formic acid/acetonitrile, and additives like tetrafluoroacetic acid on different reversed-phase columns to find the optimal column that produces the best sensitivity, efficiency, and peak shape. The analyte shows poor separation and reproducibility for proposed linear range, except for C18 Symmetry (100×4.6 mm, 3.5 μm) column that offers superior peak shape, baseline separation, desired linearity, and reproducibility. The mobile phase consisting of 0.1% formic acid:acetonitrile (65:35, v/v) ratio was found as most suitable for eluting BSI and irbesartan peaks at 4.01 and 12.22 min, respectively. Also the reproducibility of retention times for the analytes are expressed as % CV which is less than 1.0% for 100 injections on the same column. The optimized flow rate was 0.7 ml/min, which split down to 0.2 ml/min into the MS source.

The established method for the estimation of BSI in irbesartan was completely validated as per US-FDA and ICH guidelines. In order to prove that the method is capable of its intended use, the validation study covered in terms of sensitivity, specificity, accuracy, linearity and precision, and solution stability. 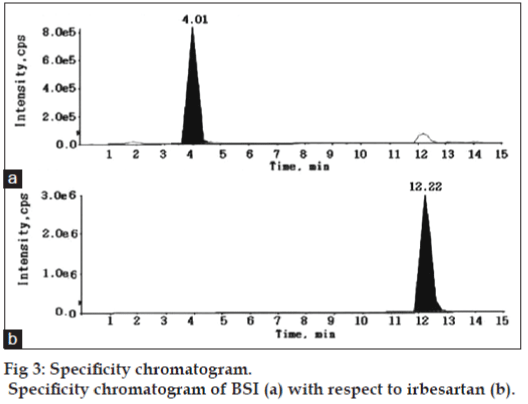 By selective ion monitoring (SIM) mode, the linearity of BSI was satisfactorily demonstrated with a six point calibration graph between LOQ to 20×LOQ of analyte concentrations (LOQ, 5×LOQ, 7.5×LOQ, 10×LOQ, 15×LOQ and 20×LOQ). The peak area versus concentration data was done by linearity plot slope, intercept and residual sum of squares analysis. The calibration curve was given based on response over the concentration range for BSI. The correlation coefficient for BSI was >0.9999. The results impart that an excellent correlation existed between the peak areas and the concentration of BSI.

The LOD and LOQ was determined by obtaining the S/N ratio, comparing the test results from samples with known concentrations of analyte with those of blank samples and establishing the minimum level at which the analyte can be reliably detected. The LOD and LOQ of BSI were 0.03 μg/ml and 0.1 μg/ml, respectively. The predicted LOD and LOQ concentrations were verified for precision by injecting each solution six times for LC-MS/ MS at predicted concentration. The chromatograms are shown in fig. 4 and further results are given in Table 1. The recovery studies were performed to evaluate accuracy and specificity of the method, accordingly the accuracy of the method was determined in triplicate at LOQ, 10×LOQ and 15×LOQ spiked concentrations in formulation sample as well as in irbesartan tablet. The percentage recoveries of BSI exhibited an excellent recovery within the range of 97.6-103.5%. The recoveries at such lower levels were satisfactory with %RSD <1.0. The relative standard deviation was calculated from the average of triplicate analysis, the results are shown in Table 2. The obtained data indicated that no extra amount of BSI than spiked was found in formulation and pure tablet powder of irbesartan samples.

Table 2: Evaluation of accuracy and specificity of developed method

Robustness of the method was determined by making slight and deliberate changes in experimental conditions. The flow rate of the mobile phase was altered by 0.2 units i.e., 0.5-0.9 ml/min and the effect of temperature on resolution was also studied at 38º and 42º (altered by 2 units). For the above deliberately varied experimental conditions, there was no significant change in the chromatographic performance, which indicated the robustness of the method parameters.

The stability experiments were performed thoroughly to evaluate the stability of BSI stock solution at room temperature. The results demonstrated that the stock solution of BSI was stable at room temperature atleast for 36 h. The recovery values of BSI at different time intervals were compiled in Table 3. From the results we found that the recoveries at different time intervals were within 98.4-101.2% of their nominal values. The results obtained were then compared with the method precision results. The difference between recoveries at 0th and 36th h were not more than 10%, which indicates that the sample prepared in methanol is stable for at least 36 h.

Mr. A. Vijaya Bhaskar Reddy is highly grateful to the UGC (BSR), Government of India, New Delhi for ﬁnancial assistance in the form of an award of Meritorious Research Fellowship. The authors are also thank to the Sipra Labs Limited, Hyderabad, for supporting this work.