Hepatocellular carcinoma (HCC) has increased substantially with an annual incidence rate of 9% in the last two decades globally, which is attributed to hepatitis C virus (HCV) widely transmitted through blood to blood contact[1]. Major global health burden persists due to the progression of acute hepatitis to liver cirrhosis and carcinoma, with poor prognosis due to the increased risk of metastasis. Various host encoded markers and proteins are associated with the progression of HCC and its metastasis. Amidst various host encoded proteins, non-metastatic clone 23, isoform H1 (NM23-H1) is a metastasis suppressor gene against HCV and has been in association with a wide variety of oncogenic tumours in humans[2]. NM23-H1 gene encodes for a protein that catalyses the phosphorylation of nucleoside diphosphates to nucleoside triphosphates and its reduced expression can enhance metastasis of tumours in host tissue[3]. NM23-H1 expression levels are highly altered based on the host-virus interactions and is considered to be modulated by various tumour associated genes in enhancing metastasis with further tumour or cancer progression in HCC and in other viral-associated cancers[4]. In addition, NM23-H1 in association with other co-located cellular proteins also do induce variations in cellular migration, cell adhesion, apoptotic and necrotic functions etc.[5]. As a contradictory overexpression of NM23-H1 also induces a high progression of cervical cancer in correlation with other associated parameters[6]. It has been thus documented NM23-H1 could be a novel candidate to target the regulation of cancer metastasis, and especially in HCV mediated HCC. Novel antiviral drugs are found to be clinically ineffective to specifically target NM23-H1, thus exploring the need of alternative compounds as ligands in their regulations.

In this view, the present study is aimed to target NM23-H1 with the constituents of the mushroom,

G. lucidum, which has been documented to be a traditional tropical country medicine with various medicinal properties. G. lucidum is a white rot fungus and is popularly used in Chinese medicine, contains many triterpenoids in the form of ganoderic acids and reported to be cytotoxic to human carcinoma cell lines but with less toxicity to normal cell lines in a dosedependent manner[7]. G. lucidum also enhances natural killer cell activity by inducing high level secretion of perforins and granulysins[8]. The protective effects of G. lucidum extract is also reported against a wide variety of liver injuries[9]. This investigation is aimed at assessing the NM23-H1 enhancing role of ganoderic acids T, A and H from G. lucidum using in silico docking analysis.

Retrieval of NM23-H1 and protein optimisation:

Using Chemsketch Software, the structures of ganoderic acid T, ganoderic acid A, ganoderic acid H and lamivudine were drawn together with their 3-D structures and optimization. The selected ligands were retrieved in SDB format, which were further saved in .mol file followed by the subsequent conversion using open babel molecular converter program[10] and were saved in PDB format.

The docking analysis to interpret the affinity between ganoderic acids T, A, H and lamivudine with NM23-H1 in oncogenic hepatitis viruses was achieved by ADT with the intermediary steps such as pdb.qt files for proteins and ligands. Using graphical user interface program ADT, the grid box creation was completed. Prior preparation of the grid map using the grid box with a grid size of 126×126×126 xyz points was done.

Further using Lamarckian genetic algorithm (LGA), docking simulation was achieved by setting the initial position, orientation and torsions of the ligand molecules in a random position. Ten different runs set to terminate after a maximum of 250 000 energy evaluations was used for each docking experiment with the population size set at 150. A translational step of 0.2 Å, quaternion and torsion steps of 5 were applied for each dock. The most favourable free energy of binding is achieved by clustering the results >1.0 Å in positional root-meansquare deviation (RMSD)[11]. Finally, the pose was extracted and aligned with the receptor structure with the lowest binding energy or binding affinity for final analysis.

The protein-ligand interactions like hydrogen bonding and other non-bonded energies between the ganoderic acids T, A, H and the lamivudine with NM23-H1 were visualized using Biovia Discovery Studio Visualizer software. The relative stabilities were evaluated using their molecular dynamics, binding affinities, energy simulations with further docking score assessments.

The 3D crystal structure of human nucleoside diphosphate kinase A (NM23-H1) was downloaded from PDB database and its PDB structure id was documented as 1UCN–A chain (strain SC5314). Removal of the water molecules and final stage merging of hydrogen atoms to the receptor molecule was successful. The 3D structure was visualized using RasMol with the analysis of pink colour indicating the alpha-helix, yellow arrow indicating the beta sheets and white colour indicating the turns (fig. 1). Ligand optimization was achieved using ACD Chemsketch and retrieved in a compatible format using Open Babel molecular converter tool. 2D and 3D structures of the ligands and its SMILES format were obtained successfully (fig. 2). 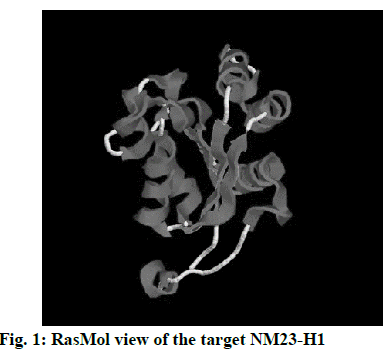 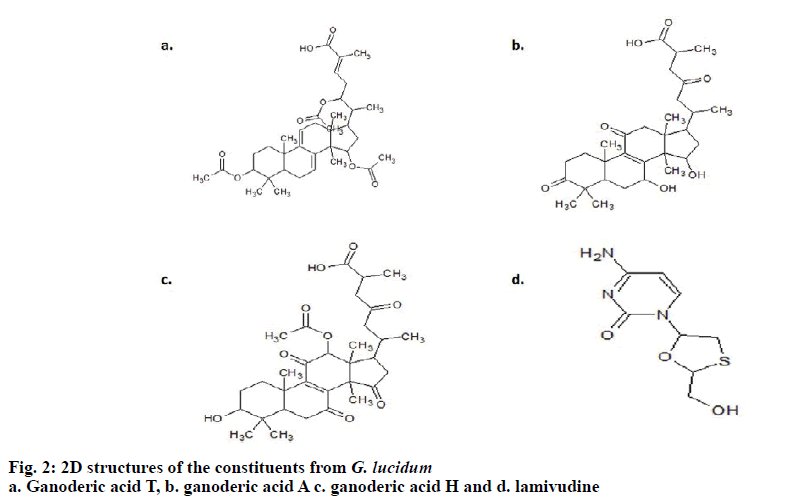 Table 1: Docking Results of Ganoderic Acids T, A, H and Lamivudine with Nm23-H1

Table 2:Interactions of Ganoderic Acids T, A, H and Lamivudine with Nm23-H1

NM23-H1 gene is considered as a potent factor as it encodes protein products for tumour suppression and metastasis in different forms of tumours especially in oncogenic hepatitis viruses. NM23-H1 plays a vital role in varying the extent of tumour progression and further metastasis[13]. Until now, as there are no clinically effective antiviral drugs to inhibit tumour metastasis, NM23-H1 is considered as the best target for activation by natural compounds. In this context, G. lucidum, a mushroom containing ganoderic acids was known to exert toxic effects against viruses[14]. Possible mechanism of G. lucidum antiviral effects on herpes group of viruses is already documented[15]. In addition, G. lucidum is also reported to possess a promising role in treating viral hepatitis[16]. However, the best fit of the G. lucidum constituents with the NM23-H1 and to enhance its tumour suppression and metastasis in various forms of cancers especially in HCV-associated tumours has not been studied. In the present investigation, this activity was assessed effectively using molecular docking analysis, which is a molecular modelling technique. Amidst many tumour suppressor proteins, NM23-H1 was retrieved from the PDB database as a desirable target based on the data recorded in database and was freely accessible as nucleoside diphosphate kinase A 1UCA chain. In the present study, ganoderic acids T, A, H and lamivudine was docked with NM23-H1 that resulted in a promising receptor-ligand complex. Docking analysis involved 2 major steps where the prediction of the exact orientation of the conformers in to the best active site pocket called pose and the strength of target-ligand binding interactions is achieved by scoring[17]. The best docked ligand models were selected according to the lowest binding energy that comprised the largest conformational cluster in each binding. ADT-4.2, which is considered as a suite of automated docking tool with a software for modelling flexible small molecule such as drug molecule binding to receptor proteins of known 3D structure was used. Using genetic algorithms for the conformational search, a rapid grid-based method of energy evaluation was achieved in the study to analyse the docking simulations. The relative binding affinities for ganoderic acid derivatives and lamivudine helped to observe the structure-inhibitory action relationships. In this study, the LGA was used to explore the binding conformational landscape of ganoderic acids T, A, H and lamivudine with NM23-H1. The docking scores on NM23-H1 indicated that there was a direct relationship between the energy of the binding affinity, referring to the lowest docking scores and the stability. In accordance with this, apart from the binding energy, the inter-molecular energy, van der Waal’s energy and torsional energy were also at a higher end for ganoderic acid H but with highest alkyl/π-alkyl interactions for ganoderic acid T.

Two and three dimensional conformational structures of the ligand-protein complexes were visualized using the Biovia Discovery Studio Visualizer to investigate the binding modes. Analysis predicted the hydrogen bond interactions between NM23-H1 and the ligands, yielding promising results with hydrogen bonds and bonding energies. The number of hydrogen bonds together with the enthalpic gain due to the water molecules determines the best fit[18]. In this context, by assessing the binding energy and their corresponding ligand efficiency, intermolecular energy, electrostatic energy, vdW+Hbond+desolv energy, internal energy and torsional energy of NM23-H1 with the ganoderic acid derivatives and lamivudine, showed ganoderic acid H to be the best enhancing agent of NM23-H1 suggesting its role to inhibit or arrest the tumour metastasis, which could be useful in controlling hepatitis-associated carcinomas. This is followed by ganoderic acid T and ganoderic acid A in comparison to lamivudine, which yielded less energy of -4.47 Kcal/mol but with 5 hydrogen bonds as that of ganoderic acid H.

Visualization by Biovia Discovery studio tool enabled us to view the 2D structures of the drug-ligand interactions. The ligands, ganoderic acids T, A, H and lamivudine bind to NM23-H1 through non-covalent interactions such as H-bonding, alkyl, alkyl-π, π-π, π-σ and van der Waals interactions. Simplified visualization was achieved and is illustrated in 2D, with H-bonding as dark green circles associated with green dashed lines, van der Waals forces as medium light green circles, carbon-oxygen dipole-dipole interaction as light green circles with dashed lines, alkyl-π interactions as light pink circles with dashed lines, T-shaped π-π stacking and parallel π-σ stacking as both indicated with dark pink circles (fig. 4). The present investigation provided theoretical evidence for designing novel drugs from the mushroom G. lucidum using computational bioinformatics tools and databases[19,20], which could be effective against tumour metastasis especially in viral hepatitis by targeting NM23-H1. Selection of tumour suppression enhancing compounds from G. lucidum was achieved in the present study using in silico molecular docking assessments. The docking evaluation in this study suggested promising role for 3 different forms of ganoderic acids T, A and H in enhancing tumour suppression and further metastasis with promising binding to NM23-H1. Other associated interactions like interactions with ADP might also be possible with these compounds, which requires further confirmation. Experimental validation in vivo and in vitro would further substantiate the theoretical evidence obtained from this study. This preliminary evidence would promote further target-based experimental screening of the G. lucidum constituents for a highly selective mechanism of action to prevent metastasis in viral hepatitis.