The Antiinflammatory and Antiarthritic Properties of Ethanol Extract of Hedera helix

The ethanol Hedera helix plant extract was tested for its antiinflammatory properties. Intraperitoneal injections of 7.5 ml/kg wt ethanol extract showed antiinflammatory activity with 88.89% inhibition as compared to reference drug diclofenac, which showed 94.44% inhibition in formalin-induced paw oedema. As formalin-induced paw oedema closely resembles human arthritis, the antiarthritic property of ethanol extract of Hedera helix was also investigated. The visible reduction in arthritic symptoms by extract of Hedera helix suggests the potential of the plant extract against inflammation and arthritis.

hedera helix (Linn) is common ivy of family Araliaceae found growing in the Darjeeling hills. It is an evergreen woody climber scaling the walls and covering the walls with a canopy of leaves. It is also grown as an ornamental plant. In folklore medicine, it is used for the cure of benign warts. Inflammation is a fundamental protective response. However, inflammation can be harmful in conditions such as life‑threatening hypersensitive reactions to insect bites, drugs, toxins and in chronic diseases such as rheumatic arthritis, atherosclerosis, lung fibrosis and cancer [1]. Inflammation has been seen to accelerate cancer and chronic inflammation is regarded as an essential factor for the progression of neoplastic processes [2]. hedera helix extract has been reported to have antioxidant properties [3‑6], antispasmodic properties [7], antiallergic effects [8]. The effect of dry extracts on respiratory functions of children with chronic bronchial asthma [9,10] and its antitumour activities has been reported [11‑16]. In the quest for seeking new herbal sources for the treatment of inflammation and cancer, in the present study, hedera helix was tested for its antiinflammatory properties using 2% formalin for induction of inflammation. Antiinflammatory experiments were carried out using diclofenac as the reference drug. The antiarthritic property of hedera helix extract has also been investigated.

Swiss Albino mice (6‑8 week old) of both sexes were used in the study. Animals of approximately equal age and weight were used for experimental and control groups. All animal experiments were carried out according to the guidelines of the Animal Ethics Committee (Reg no. 840/ac/04/CPCSEA).

For the preparation of Hedera extract, leaves of the plant were collected and was identified at the Botany Department of St. Joseph’s College, Darjeeling. The leaves were washed with water. After soaking away excess water, 10 g of the leaves were taken and crushed to a paste in a mortar and pestle. Fifteen millilitres of absolute alcohol were added and kept in a refrigerator at 4° for 12 h. The extract was then filtered through Whatman filter paper no. 1; then the filtrate was filtered through Millipore filter and the final solution obtained was stored at 4° for further use [17].

Freshly prepared 2% formalin was used as the oedematogenic agent. Twenty minutes after administration of PBS in control animals and after injection of various doses of plant extract and reference drug in experimental animals, each animal was injected with 20 µl, of formalin directly on subplantar region of left hind paw by exmire microsyringe (ITO Corporation, Tokyo, Japan) [19]. Formalin‑induced paw oedema is one of the most suitable test procedures to screen chronic antiinflammatory agents, as it closely resembles human arthritis [20]. The nociceptive effect of formalin is also biphasic as it acts as an early neurogenic component followed by a later tissue‑mediated response [21]. The antiinflammatory response of Hedera extract on formalin‑induced paw oedema suggests the usefulness of Hedera extract in the treatment of inflammation‑associated diseases like arthritis.

All values are mean±SD (n=8), *P<0.001 with respect to control, Values in parenthesis are % inhibition, PBS=Phosphate buffered saline

Control animals with oedema induced with formalin were observed for 7 days. Arthritic properties with swelling of joints of left leg and tail were observed. These animals with swollen joints were taken for further arthritic treatment with Hedera extract. Erythrocyte sedimentation rate (ESR) of blood was carried out in these animals with swollen joints. Blood was collected by tail vein puncture of the animals with a 1 ml syringe. The blood was anticoagulated with 12% ethylenediaminetetraacetic acid and diluted 1:1 with sodium citrate. ESR was measured using Westergren’s method with pipette calibrated in mm from 0 to 200. ESR of normal animals was regarded as control. ESR acts as a guide to the progress of a disease. It is useful as an aid in differential diagnosis.

For the treatment of arthritic symptoms, 75 µl Hedera extract was injected at paw once daily for next 7 days. After 7 days treatment with Hedera extract, blood was again collected by tail vein puncture and whole trunk collection and ESR carried out.

Injection of 75 µl Hedera extract to the paws with swollen joints once daily for 7 days showed marked improvement on the swelling suggesting that hedera helix is a potent herb for the treatment of arthritis in animals. ESR studies show that ESR values before Hedera extract treatment is 3.4 mm/h as compared to normal and after Hedera treatment (2.5 mm/h) (fig. 1) indicating progression towards recovery and decrease in inflammation in the body. 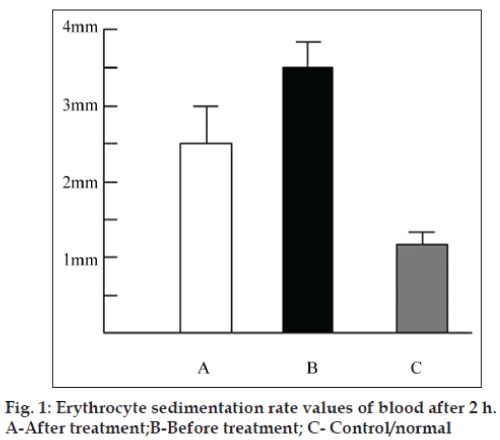 Though, some work in plant extraction and identification and synthesis of the various components of the plant is being carried out [24,25] especially, for its antitumour activity, the exact component that brings about the antiinflammatory, analgesic and antiarthritic property needs to be isolated and tested. A new horizon for herbal treatment has opened up and hedera helix would be a cost‑effective and a potent herbal medicine for the treatment of inflammation and arthritis.

The author would like to thank Prof. Ashim K. Chakravarty, Emeritus Professor, Centre for Life Sciences, NBU and Mr. Tamal Mazumdar for extending their help in the course of the study. The author would also like to thank the UGC for granting the Minor Project and financial help under which this work was carried out.