The Effects of Gender and Multiple Oral Dosing on the Pharmacokinetics and Bioavailability of Morroniside in Beagle Dogs: A Pilot Study

Morroniside, an iridoid glycoside (Figure 1), is the main active ingredient from Cornus officinalis Sieb. et Zucc. and Sambucus williamsii Hance, both of which are rich sources of iridoid glycosides and have been used as traditional Chinese medicinal herbs for centuries. Various pharmacologic studies have indicated that morroniside has therapeutic effects on diabetic angiopathies, renal damage, lipid metabolism and inflammation and bone resorption [1-4]. In recent studies, morroniside showed the protective actions against the cytotoxicity produced by exposure to H2O2 in human SH-SY5Y cells [5,6]. In addition, morroniside could protect ischemia/reperfusion-induced brain injury by decreased the caspase-3 activity, reduced the infarction volume and minimized oxidative stress [7]. 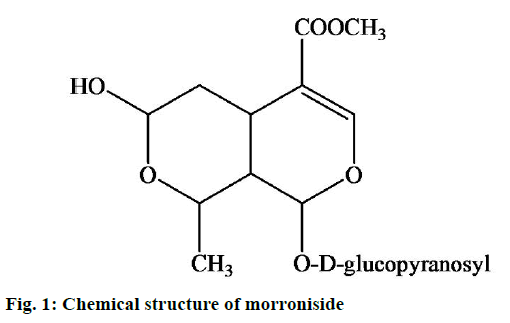 Morroniside was extracted and purified from sarcocarp of C. officinalis, in the Department of Pharmacology, Xuanwu Hospital of Capital Medical University and its purity was over 98.5% by HPLC analysis. Paeoniflorin, used as the internal standard (IS), was purchased from the National Institute for the Control of Pharmaceutical and Biological Products (Beijing, China). HPLC-grade methanol and acetonitrile were obtained from Fisher Scientific (Fair Lawn, NJ, USA). Sodium formate was obtained from Beijing Chemical Reagent Company. All other chemicals were of analytic grade or better.

Twelve beagle dogs (nine males and three females), weighing 10.0 ± 2.0 kg were purchased from Beijing Marshall Biological Technology Co., Ltd. (Beijing, China, Certificate number. SCXK, Beijing, 2011-0003). Room environment was maintained continuously at a temperature of 20-25°, relative humidity of 40-70%, 10-15 air changes per hour and a 12 h fluorescent light/12 h dark cycle. All dogs were fed with standard dog diet and had free access to water. The animal experiments were conducted at the Beijing Center for Drug Safety Evaluation followed the protocol of the Institutional Animal Care and Use Committee of the Centre, which was in compliance with the guidelines of the Association for Assessment and Accreditation of Laboratory Animal Care International.

Dogs were fasted for at least 12 h with free access to water prior to the pharmacokinetic studies [10-13]. Three male and three female dogs were used to determine gender-related difference of morroniside. The dogs were administered with morroniside at a dose of 15 mg/kg intragastrically (i.g.). Blood samples, about 1 ml each collected through hind leg vein, were placed in heparinized tubes pre-dose and at 5, 15, 30, 45, 60, 120, 240, 360, 480, and 720 min post-dose.

The dogs in multiple (7 times, q8h) administrations group (n=3) were also administered a dose of 15 mg/ kg. Blood samples of multiple doses were immediately collected after the first and seventh oral administration at the same time point as single dose study.

All plasma samples were harvested by centrifugation at 3000 rpm/min for 15 min at 4° and stored below –20° until LC-MS/MS analysis. Samples were prepared by using the standard protein precipitation method consisted of adding 50 μl of plasma to a centrifuge vial, followed by 50 μl of purified water and 350 μl of methanol containing 100 ng/ml paeoniflorin. The tubes were vortex-mixed for 1 min and centrifuged at 14 000 rpm/min for 10 min and 10 μl of the supernatant was analysed [9].

Absolute bioavailability (F%) of morroniside was calculated using the following Eqn., F% = (AUC(0-∞, i.g.)×Di.v./AUC(0-∞, i.v.)×Di.g.)×100, (1), where AUC(0–∞, i.g.)and AUC(0–∞, i.v.) represent the area under the concentration–time curve from zero to infinity after morroniside oral and i.v. administration, respectively, whereas Di.g. and Di.v. represent the dose of morroniside oral and i.v. administration, respectively. 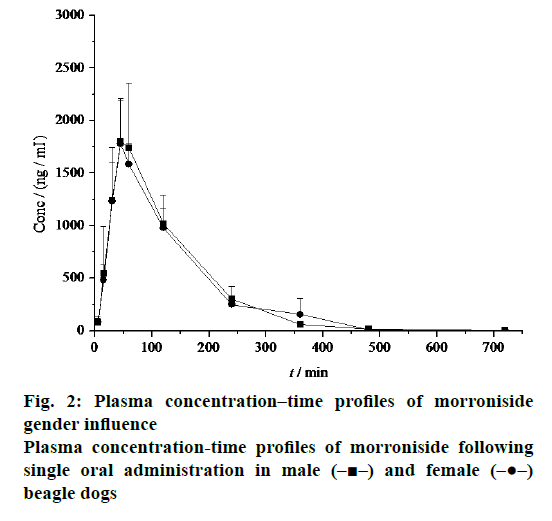 The mean plasma concentration-time profiles after single and multiple oral administrations of morroniside in beagle dogs were shown in Figure 3 and the derived pharmacokinetic parameters were presented in Table 1. Morroniside concentrations reached a maximum of 1940.00 ± 289.31 ng/ml, with the AUC(0-∞), t1/2z, CLz and MRT equal to 4128.92 ± 1259.65 ng·h/ml, 0.97 ± 0.05 h, 3.91 ± 1.36 l/h/kg and 1.60 ± 0.21 h following multiple oral administrations. The absorption of morroniside for multiple administrations was still very fast (Tmax, 0.57 ± 0.13 h). No significant deviation was observed in the difference of all the pharmacokinetic parameters following the single and multiple doses of morroniside in dogs. 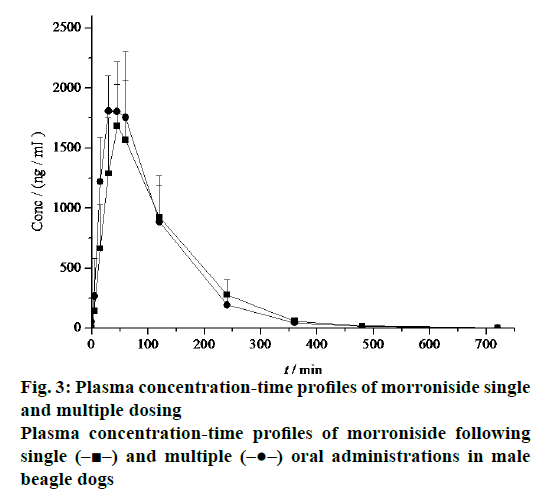 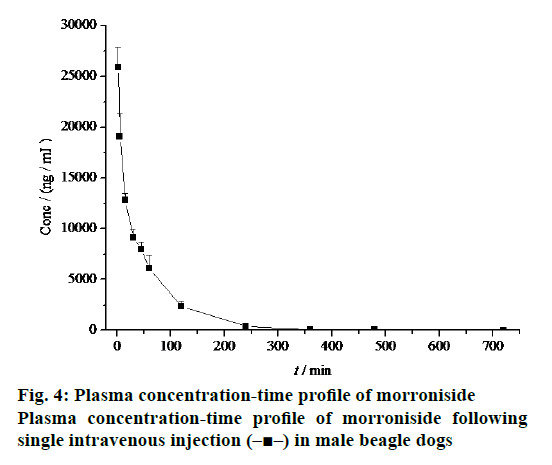 This work has been financially supported by the Innovation Project of Shandong Academy of Medical Sciences and National Major Scientific and Technical Special Projects for Innovative Drug of China (No. 2012ZX09301003- 001-007).