This is an open access article distributed under the terms of the Creative Commons Attribution? NonCommercial? ShareAlike 3.0 License, which allows others to remix, tweak, and build upon the work non? commercially, as long as the author is credited and the new creations are licensed under the identical terms.

Coronary heart disease (CHD) is a global health hazard, and the increase in the aging population has made it one of the most common diseases treated worldwide [1,2]. Despite the availability of effective therapies and advances in percutaneous coronary intervention (PCI) and surgical procedures, the rates of morbidity and mortality among CHD patients are extremely high. CHD management has been explored in several studies that focused on delaying disease progression, identifying and managing diseaserelated complications, enhancing quality of life, and improving the long-term prognosis of CHD patients [3]. Because some of these studies [4] found that pharmacist interventions were helpful in managing CHD risk factors in outpatients, the authors tried to determine whether pharmacist interventions that began in the inpatient setting were equally beneficial. The pharmacists were part of a multidisciplinary CHD management team that included cardiologists, attending physicians, nurses, and dieticians; a combination of practitioners that has been extremely useful in developing countries like China, where CHD management is suboptimal and very little experimental data is available to guide outcome improvement efforts.

Patients in the 49-bed cardiology ward of the People’s Hospital of Henan Province, one of the largest general teaching hospitals in China, were selected to participate in the study. The study received approval from the hospital’s institutional ethics committee and written informed consent was obtained from all study participants. The clinical pharmacists who were part of the study had at least two years of experience in CHD and could spend the entire day on the cardiology ward.

To participate in the study, patients needed to (1) have already been diagnosed with CHD by their physician, (2) have accepted four or more kinds of drugs, (3) be 18 years of age or older, (4) have at least a primary high school education, (5) be able to complete the study, and (6) be available for telephone follow-up.

The following people were denied study enrollment: (1) Pregnant or lactating women; (2) patients who were in other research projects; (3) patients with severe co-morbidities, such as liver failure, kidney failure, lung failure, or cancer; (4) patients with a family history of psychosis; and (5) patients with barriers to communication.

The study was conducted on 90 eligible patients who were discharged from the People’s Hospital of Henan Province between January 1 and June 30, 2012. Patients were randomly assigned to the experimental and control groups. Data was collected after admission to the hospital and immediately before discharge from the hospital, and all patients received a follow-up telephone call six months after discharge. Demographic data was analyzed using a common standard-based approach (Table 1). No significant difference was found between the demographic characteristics of the two study groups.

The control group received conventional medical treatment without pharmacist participation and the experimental group received conventional medical treatment plus interventions by clinical pharmacists. The clinical pharmacists developed individual drug regimens based on each patient’s needs and condition [5-7]. Each regimen was compared to best practices and evidence-based guidelines. The pharmacists attended medical rounds daily and advised physicians on the risk factors and clinical manifestations of CHD, possible complications, and treatment principles. The pharmacists also educated the medical staff on the properties and possible adverse drug reactions (ADRs) of the medications the patient was taking and the properties and possible ADRs of the prophylactic drugs included in the patient’s regimen, such as antiplatelet medications, antihypertensive, lipid lowering drugs and antiangina preparations.

The pharmacists provided information on therapeutic lifestyle changes that could slow the progression of CHD, including eating a low-fat, Mediterranean-style diet (more bread, fruit, vegetables and fish; less meat; and products based on plant oils instead of butter and cheese), smoking cessation and avoiding secondhand smoke, not drinking alcohol, restricting salt, managing weight, and exercising. The pharmacists performed psychological interventions, such as communicating with patients often, helping patients reduce stress and anxiety, and suggesting strategies to deal with depression and eliminate insomnia, all of which impact heart health.

Data were entered using SPSS (Version 18). Categorical data were expressed as percentages and continuous data were expressed as mean±standard deviation (SD). Associations between categorical variables were investigated using the Chi-square test or Fisher’s exact test, the differences in the measurement data were compared with the paired t-test. The rate at which treatment goals were achieved was calculated using the per-protocol (PP) analysis and the intentionto- treat (ITT) analysis. 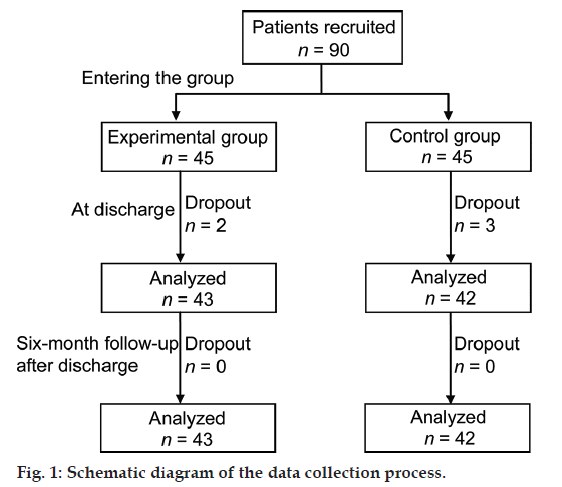 Self-care ability and quality of life were assessed at discharge. The measures included a satisfaction self-evaluation, determining whether patients knew about their condition and their therapeutic goals, whether they could use oral drugs correctly, and whether they planned to make lifestyle changes (Table 2).

Table 2: Comparison of self? care ability and Quality of life.

Blood pressure (BP), rates of diabetes and dyslipidemia, average heart rate, and BMI were determined in both groups using evidence-based guidelines and expert consensus during follow-up telephone calls six months after discharge (Table 4). The indicators were evaluated according to the above-mentioned control objectives.

Summary of BP, diabetes and dyslipidemia control, average heart rate and body mass index (BMI) at the end of the study

A per-protocol (PP) analysis and an intention-to-treat (ITT) analysis were both performed six months after discharge to evaluate the rate at which treatment goals were achieved (Table 5). In the ITT analysis, 77.9% of patients in the experimental group achieved their treatment goals compared to 48.9% of patients in the control group. These percentages were significantly correlated with clinical pharmacist intervention (χ2=8.086, P=0.004). In PP analysis, the effective rate was 81.4% in the experimental group and 52.4% in the control group, which was a statistically significant difference (χ2=8.097, P=0.004).

PP is per?protocol analysis and an ITT is intention?to?treat analysis

At the six-month follow-up, patients were asked about ADRs. Five ADRs (three in the experimental group and two in the control group) had occurred that included one case of liver dysfunction, two cases of gastrointestinal discomfort, and two cases of pulsatile headache. The difference in incidence was not statistically significant according to PP analysis and Fisher’s exact test (P=1) (Table 6).

CHD is the world’s biggest killer. It is caused by multiple risk factors and has a high incidence of morbidity and mortality that has been lowered by the new developments in interventional therapy and surgery. However, these are only remedial efforts that do not improve quality of life or long-term prognosis. Prevention and control must be our therapeutic goals.

Although there are very few studies that evaluate the effectiveness of pharmacist participation in CHD patient care, the ones that have been performed [8-10] have shown that multidisciplinary cooperation, especially cooperation between physicians and pharmacists, can effectively reduce the incidence of drug-related problems and improve outcomes very favorably in a number of clinical situations. In particular, a previous study found that pharmacist intervention improved poor adherence to drug regimens and boosted active cooperation in treatment [11]. Other studies proved that psychological counseling by clinical pharmacists enhanced patients’ confidence in their treatment regimen, reduced anxiety, promoted heart health, and resulted in a striking improvement in quality of life [12,13].

In this study, the experimental group, which had direct contact with pharmacists, had significantly greater self-care ability and a significantly greater understanding of their condition than the control group (P<0.05 in both instances). Significance was even higher between the two groups (P<0.01) in reaching treatment goals, knowledge of correct drug use, and health-promoting lifestyle modifications (Table 2).

The morbidity of CHD seems to be closely related to abnormal BP, diabetes and dyslipidemia [14]. Since these conditions are considered risk factors for ischemic heart disease and need to be controlled to avoid CHD, we used the control measures for high blood pressure, diabetes, BMI, and dyslipidemia to determine the prognosis of our CHD patients. Thirty-five patients in the experimental group and 22 patients in the control group met the standards for control of CHD risk factors. ITT and PP analysis showed that, at six months after discharge, the medication compliance rate was approximately 29% higher in the experimental group than the control group (Tables 3 and 4), which may account for this difference. The clinical pharmacists in the experimental group met with each patient, explained their disease, and explained their medication regimen and how it related to their prognosis. This seems to have significantly increased patient compliance. During the follow-up period, the clinical pharmacists in the experimental group also solved practical, drug-related problems (Table 7).

This study had several limitations. First, it was a single-center study. We felt that this was an acceptable limitation. Second, the sample was small. Finally, the study excluded patients with communication barriers. We would like to expand the experimental design by including more variables, including alcohol and tobacco use, clinical complications, and number of hospitalization days.

In summary, the current study demonstrated that clinical pharmacists can make a substantial contribution to the treatment of CHD by ensuring that drug regimens are safe and do not interact adversely with other medications the patient is taking, helping patients understand why they need to take their CHD drugs and why they need to take them on the schedule that is recommended, and suggesting health-promoting lifestyle changes that reduce the incidence of cardiovascular disease. CHD patients in the study who actively worked with clinical pharmacists during their hospital stay reported an improved quality of life, adhered more closely to treatment regimens after discharge, and showed improved outcomes on every clinical measure at six-month follow-up. Involving clinical pharmacists in the care of hospitalized CHD patients should become the new medical model in CHD care.