HBV (figure 1) is a DNA virus replicating through reverse transcription. The HBV can be transformed into covalently closed circular DNA (cccDNA) after entering hepatocytes and then remains hidden in the nucleus. So it can hardly be completely removed even with antiviral therapy. If patients are immunodeficient due to long-term use of immunosuppressive agents or chemotherapy or radiotherapy, cccDNA can be transferred into an active replication state, leading to long-term HBV infection[6]. Entecavir (ETV) is a guanine nucleotide analogue. In this study, the relation between entecavir dose and therapeutic effect in treatment of CHB was investigated. About 180 CHB patients were enrolled as research subjects. Figure 2 shows the imaging examination of a CHB patient. The patients meeting inclusion criteria included those with chronic HBV infection history, those with positive HBsAg for more than half a year, those with the DNA level of HBV being equal to or larger than 20 mEq/ml; those with alanine aminotransferase (ALT) ranging between normal value and 10 times of normal value (upper limit), with serum total bilirubin (TBIL) of 42.75 mol/l or below, with the upper limit of serum creatinine level being 1.5 times of normal value, with serum albumin of 30 g/l or above[7]. However, patients with human immunodeficiency virus, those accepting recent administration of antivirals, interferon alpha or other antiHBV drugs in recent 24 w, those with history of pancreatitis, pregnant or lactating women were excluded. Patients and their families had the right to know this study and signed informed consent. This study was approved by the hospital ethics association. The software SPSS21.0 was employed for processing data. The measurement data were expressed as mean±standard deviation, while enumeration data were expressed in natural number (n) and percentage (%). When p is ˂0.05, the intergroup difference is considered of statistical significance. In addition, the statistical description of the continuous variable was expressed as mean±standard deviation, the inter-group comparison was tested by F based on linear regression, and the effect of baseline HBV on DNA was corrected. The statistical description of the two categorical variables was expressed in number of case and percentage. 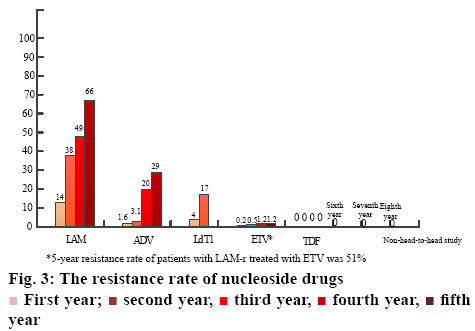 Entecavir is a new generation of nucleoside antiHBV drug. In vitro experiments showed that low concentration of entecavir could inhibit HBV replication but its cytotoxicity was low, so the advantage of selective therapeutic index was higher. In the experiment based on animal model of marmots with HBV, 0.1 or 1.0 mg/kg of this drug could significantly inhibit virus replication and the reduction of viremia to 7log10 could be achieved[9]. Moreover, after stopping the drug, the virus rebound was relatively slow. According to the study on cell and animal models, entecavir has been demonstrated to be effective in treatment of CHB.

The research group patients treated with entecavir at a dosage of 1.0 mg had a more significant reduction of HBV-DNA level, a more significant improvement of liver function, as well as higher ALT recurrence rate, HBV-DNA negative conversion rate and HBeAg/ HBeAb negative conversion rate. Moreover, no serious clinical adverse reactions were observed during the treatment, so this drug has higher safety and reliability. The results of this study are consistent with a reported study[10], as shown in figure 4. 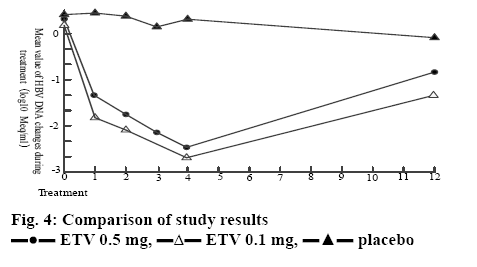 In conclusion, entecavir is a typical guanine nucleoside analogue against HBV. Entecavir was administered orally, it is taken up into the liver and phosphorylated to become the active triphosphate. Then, it competes with guanosine triphosphate, the substrate of HBV-DNA polymerase, inhibits the activity of HBV polymerase and blocks HBV replication, so as to prevent the hepatocytes infected with HBV from developing immune injury. In addition, entecavir has extremely high antiHBV activity and is a highly selective HBV polymerase inhibitor, which could inhibit viral replication rapidly and effectively. The drug is safe to treat hepatitis B and the virus resistance to this drug is extremely low. Entecavir is of great clinical value in treating CHB.