The purpose of this study was to analyze the pathogenesis of nonalcoholic fatty liver disease in rats and study the efficacy of atorvastatin intervention. One hundred Sprague Dawley rats were selected as test system. These rats were randomly divided into 5 groups, the control group, the nonalcoholic fatty liver disease group, high-dose atorvastatin group, medium-dose atorvastatin group and low-dose atorvastatin group, each containing 20 animals. An equal dose of sodium carboxymethylcellulose was applied to the model group and the control group; while atorvastatin perfusion was given to the other 3 groups. The levels of serum aspartate aminotransferase, alanine aminotransferase, triglycerides, total cholesterol, high-density lipoprotein, low-density lipoprotein and malondialdehyde were compared among the groups. The serum levels of aspartate aminotransferase, alanine aminotransferase, triacylglycerol and total cholesterol of the high-fat diet model group were significantly higher; moreover, the expression levels of MMP2, MMP9, Wnt1, Wnt4, host-catenin were significantly elevated. Treatment with atorvastatin could effectively ameliorate this abnormal condition but at high doses. Atorvastatin appears to inhibit the Wnt/β-catenin signal pathway and achieve good curative effect against nonalcoholic fatty liver disease.

Non-alcoholic fatty liver disease (NAFLD) is mainly characterized by hepatocyte steatosis and lipid accumulation due to various causes except excessive drinking history. Its pathological changes include simple fatty liver, hyperlipidemia, hypertension along with the progression of the disease, and it is regarded as a pathological manifestation of metabolic syndrome in liver[1-3]. NAFLD is a metabolic stress liver injury closely associated with insulin resistance (IR) and genetic predisposition (fig. 1). NAFLD is caused by many factors, such as lipid metabolism disorder, diabetes and viral infection. Studies have shown that Wnt/β-catenin signal transduction pathway appears in some pathological models and disease processes, which is the focus of multi-drug treatment[4,5]. Atorvastatin is a typical lipid-regulating drug, which can achieve good antiinflammatory effect and reduce serum triglyceride and total cholesterol level to improve the symptoms of atherosclerosis. This study observes the role of Wnt /β-Catenin signal pathway in the pathogenesis of NAFLD and the intervention effect of atorvastatin.

The model animals were 100 clean SD rats, including half male and half female, weighing from 210 to 230 g. The rats were adaptively bred, with the room temperature and relative humidity kept at 25° and 50 %, respectively, and scientific diet was provided. The instruments applied include real-time PCR instrument, PCR kit, electrophoresis instrument, gel imager and semi-dry electrode. The reagents prepared included blood triacylglycerol, total cholesterol, alanine aminotransferase, aspartate aminotransferase and hydroxyproline assay kit.

The rats were randomly separated into the control group, the model group, the high-dose atorvastatin group, the medium-dose atorvastatin group and the low-dose atorvastatin group, each containing 20 rats. The rats in the control group were fed with basic feed every day, including ingredients such as corn, wheat, bran, eggs and fish meal; while other groups were fed a high-fat diet including sugar, lard and powdered egg yolk. The rats in all groups were fed for consecutive 36 w. At w12, atorvastatin calcium tablets (Pfizer Pharmaceutical Co., Ltd., J20030048, 20 mg/tablet) were administered to the treatment group via intragastric administration with 100 mg/kg to high-dose group, 20 mg/kg to medium dose group and 2 mg/kg to low-dose group, respectively. The control group and the high-fat diet model group were given with equal doses sodium carboxymethylcellulose via intragastric administration.

After completion of the test, the rats were bled from common carotid artery to obtain serum and liver tissue, followed by serum separation and biochemical assay. The serum aspartate aminotransferase, alanine aminotransferase, triglycerol, total cholesterol, hydroxyproline levels in liver were measured according to the kit instructions[4-6], and the liver pathological changes were analyzed. In addition, the key protein expression of Wnt/β-catenin signal transduction pathway was detected by ELISA. All operations were carried out in accordance with the instructions.

Table 1 shows the changes in serum lipid level and transaminase level of all groups. It could be seen that the model group had higher serum levels of TG, TC and LDL than the control group, and atorvastatin could significantly inhibit the abnormal blood lipid index. The model group also had higher levels of malondialdehyde (MDA), ALT and AST while lower superoxide dismutase (SOD) level as compared to the control group. Therefore, atorvastatin treatment could significantly inhibit the aforesaid transaminases, SOD and MDA abnormalities.

Table 1: Changes of Serum Lipids and Transaminase Levels in All Groups

As shown in fig. 2A, the model group had higher level of hydroxyproline than the control group; the high and medium dose groups had lower level of hydroxyproline than the model group, p<0.05. As shown in fig. 2B, the model group had higher expression levels of MMP2 and MMP9 than the control group, but these levels were reduced upon treatment with atorvastatin indicating that atorvastatin could exert a good inhibition on the abnormal expression of the above proteins. 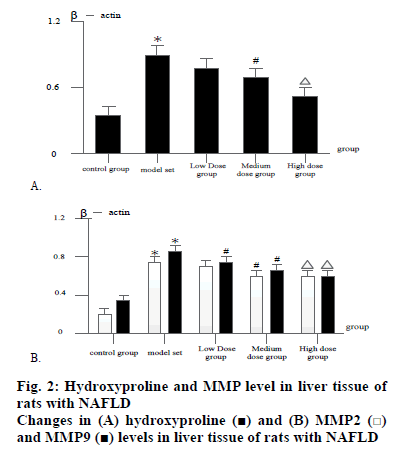 As shown in Table 2, the model group had higher expressions of Wnt1, Wnt4 and β-catenin i than the control group, p<0.05. In the atorvastatin-treated groups, the expression of these proteins was significantly inhibited in a dose-dependent manner.

Table 2: The Expressions of Wnt and Β-Catenin in Liver Tissue of All Groups

NAFLD might be caused by many factors, but there is no consensus in the current understanding about the pathogenesis. Studies have indicated that Wnt/β- catenin signal pathway plays a role in the pathogenesis and progression of liver diseases[7]. The studies on the expression and clinical significance of Wnt5a, β-catenin, E-cadherin in hepatocellular carcinoma indicated that the expression of Wnt5a is negatively correlated with the clinical stage and prognosis of liver cancer, and can exert significant antioncogenic effect on tumor tissues[8-14].

The results of this study showed that the NAFLD rat had significantly higher expression levels of Wnt1, Wnt4, β-catenin i than normal rats. Moreover, the above expressed proteins were significantly inhibited in the treated group and that there was a typical dosedependent situation. Therefore, Wnt/β-catenin signal pathway could be involved in the pathogenesis of NAFLD.

MMP family is the enzymes that cannot be absent during the normal metabolic process of liver and also belongs to the important protease in various liver pathologies. The effects of plate fixation on the expression of MMP1 and MMP in hepatic fibrosis rats induced by dimethylnitrosamine were analyzed[15,16] and the results showed that the antiliver fibrotic effect of the plate was significant, which enhanced the expression of MMP1 and TIMP1. In addition, it was found that there were abnormal expressions of MMP, MMP2, MMP9 and TIMP1 in the hepatic tissue of alcoholic fatty liver treated with Qinggan Huoxue Recipe. Qinggan Huoxue Recipe improved the abnormal liver function of alcoholic fatty liver by regulating abnormal matrix metalloproteinase and its inhibition in liver tissue. The study on the changes in the level of MMP in the liver of NAFLD rats and the effects of drug intervention showed that the model group had higher expressions of MMP2 and MMP9 than the control group. In addition, atorvastatin can effectively inhibit the expression of these proteins, indicating that the abnormal matrix metalloproteinase was introduced in the NAFLD rats with high glucose and high fat diet replication, and atorvastatin can regulate the abnormal conditions of the above proteins to improve the liver damage effect.

To sum up, the incidence of NAFLD is related to various factors. Wnt/β-catenin signal transduction pathway is commonly found in various pathological models and diseases, and serves as a target of drug therapy. As a commonly used lipid-regulating drug, atorvastatin can significantly reduce cardiovascular events and play a significant antiinflammatory role in addition to lowering serum triglyceride and total cholesterol levels. In this study, based on high fat diet-induced NAFLD model, the effect of Wnt/β-catenin signal transduction pathway on the pathogenesis of NAFLD rats were observed, and the therapeutic effects of atorvastatin were analyzed, which provides an important basis for treating alcoholic fatty liver. The results showed that atorvastatin could inhibit the Wnt/β-catenin signal pathway and improve the hepatic injury of non-alcoholic fatty liver in rats. However, more large-sample studies are needed in the future to fully demonstrate this result.