The Markov model is used to study the effect of the vascular geometric model and the elastic blood vessel wall on the treatment and nursing care for patients with severe heart failure after coronary artery bypass grafting due to changes in hemodynamic characteristics. In accordance with the original CT data of the patients undergoing the coronary artery bypass grafting, the data are imported to the MMICS software to construct the Markov model for application after the coronary artery bypass grafting. Markov model is applied on the basis of the two modules, the ANSYS mechanical module and the CFX module. Through the special fluid structure coupling algorithm, the bidirectional coupling calculation of elastic blood vessel wall and blood can be implemented. Under the condition of a given pulse pressure, the distribution and deformation status of the wall shearing stress of the elastic tube and the rigid wall are simulated and compared. The results of the research showed that the maximum wall shearing stress and the displacement of the Markov model are higher than those of the CAD simplified model. In addition, the positions where the maximum displacement occurs in the two models are completely different. The maximum wall shearing stress and displacement in the application Markov model are lower than those in the application of the rigid vessel wall model. These results could provide a more reasonable data reference for the clinical diagnosis of coronary restenosis.

The subject selected is a patient undergoing the coronary artery bypass grafting in Beijing Fuwai Cardiovascular Hospital, who is a female, 56 y old, with left coronary artery occlusion, underwent the transplantation of great saphenous vein. Fifteen days after the bypass grafting, an application Markov model is constructed. The 64-slice multi detector spiral CT scanner by GE Co., USA was used to carry out fault segmentation on the human chest (slice thickness is 0.5 mm, a total of 466 scans) and the medical images in the DICOM format were obtained. The CT coronary angiography is shown in figure 1. 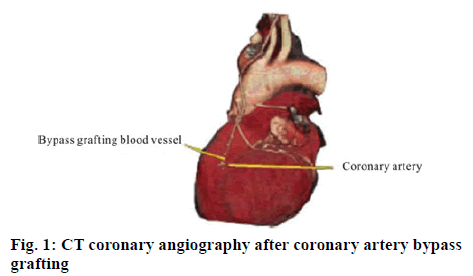 The CT scan data of the patients who underwent the coronary artery bypass grafting was imported into the MIMICS software and the images are positioned automatically. The approach of combining the regional growth method based on the gray value, the threshold segmentation method and the manual segmentation method was adopted and then optimization treatment was carried out on the number of the surfaces and the quality of the surface model to obtain the application Markov model optimized after the coronary artery bypass grafting. The thickness of the CT image acquisition layer is relatively high and the gray value of the coronary artery blood vessels was relatively close to that of the other tissues and entangled on the heart. Therefore, the extraction process of the model is relatively time-consuming and laborious. In order to carry out the fluid structure coupling calculation in the ANSYS software and the CFX software, it is necessary to have the vessel wall surface model in the format of NURBS. For the CT images obtained by the tomography scanning, it is impossible to identify the wall thickness of the blood vessel. It is required that the STL should be relatively thin and irregular. Hence, it is very easy to cross when constructing the grid and it takes relatively a long time to complete the repair processing manually. The application Markov model thus generated is shown in figure 2. It can be imported into the ANSYS Geometry to generate a blood flow model by using its Fill function, which has the degree of stenosis of about 75 %. In accordance to the trend of vascular spline curve after the coronary artery bypass grafting, the simplified CAD model with the blood vessel diameter of 2 mm is plotted by using the UG 3-D graphics software, and the diameter of the vessel at the occlusion site is 1 mm. Shelling is carried out in the ANSYS Geometry with the wall thickness of 0.1 mm. The resulting wall model after the coronary artery bypass grafting thus generated is shown in figure 3. Then, the Fill function is used to fill the inner surface of the vessel wall to generate a blood flow model.

Figure 2: Curved surface of the vessel wall in the application Markov model

The 3-D software was used to reconstruct the application Markov model, which cannot separate 2 kinds of blood vessel walls and thus different material properties are assigned. Although the wall properties of the great saphenous vein and the coronary artery indicate that both have elastic walls, relative to a rigid wall, the difference in the parameters of the 2 kinds of elastic walls have no substantial influence on the study. Therefore, uniform material property data was adopted, which was set as the following, the density of the vessel wall is 1,062 kg/m3, the elastic modulus is 4.66 MPa, and the Poisson’s ratio is 0.45, and the density of blood is 1,050 kg/m3. The blood under physiological condition is a kind of viscoelastic suspension medium. It is a multi-phase system that is composed blood cells and the plasma. The viscosity of the blood is dependent on the concentration of the red blood cells, their deformability, aggregation, viscosity of the plasma and so on and it falls under the category of a non-Newtonian fluid. In the hemodynamic studies at present, blood is generally assumed to be a viscous Newtonian fluid. This assumption is appropriate for the case of the high flow shearing rate. However, in case of the presence of stenosis in the small blood vessels or blood vessels, the region that generates very low flow shearing rate may exist. Hence, it is necessary to take the non-Newtonian properties of the blood into consideration. Researchers have put forward a few stress-strain relationship models related to the viscosity of the blood. However, no single model can describe the true rheological characteristics of the blood accurately. The Carreau non-Newtonian model is considered to be very close to the experimental blood flow environment. In addition, its non-Newtonian effect is not over estimated. Therefore, the Carreau model is adopted in this paper to express the non-Newtonian properties of the blood, and the viscosity expression is as follows, 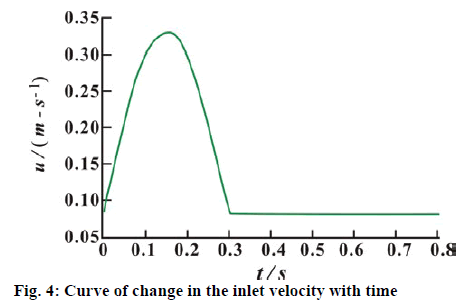 Figure 4: Curve of change in the inlet velocity with time.

Endothelial cell proliferation in the failure of the coronary artery bypass grafting is closely related to the local hemodynamic factors; while the intravascular local hemodynamics is strongly dependent on the geometry of the coronary artery bypass graft vessel. The increase in the blood flow in the graft is a gradual process. Part of the blood flow passes through the stenotic coronary artery in the early stage after the coronary artery bypass grafting. The confined jet that comes from the stenosis interacts with the blood flow that comes from the graft in the vicinity of the suture area and forms complicated flow field. This will have an important effect on the endothelial cell proliferation in the suture area and the re-occlusion at the site of stenosis. Due to sudden changes in the condition, patients often have negative emotions such as nervousness, anxiety, fear, despair and so on. These negative emotions will increase the oxygen consumption of the myocardium and thus affect the treatment of the disease. Therefore, nurses should have keen observation and carry out counselling in a timely manner to dispel the negative emotions of the patients. During the rescue process, nurses should make appropriate explanations and provide sincere care that include, giving the patients a vote of belief, wiping the sweat from the forehead of the patients, holding both hands of the patients tightly, carrying out professional and skilled nursing operations and so on, so as to gain the trust of the patients, help them build confidence in fighting against the disease and facilitate active cooperation of the patients with the treatment. The fact that the motion of the vessel wall can reflect the blood flow in the blood vessel more truthfully is taken into consideration. For the application Markov model, the individualized rigid vessel wall model, the CAD simplified model and the CAD simplified nonapplication Markov model, the effects of the different model conditions on the wall shearing stress and the wall displacement are studied. 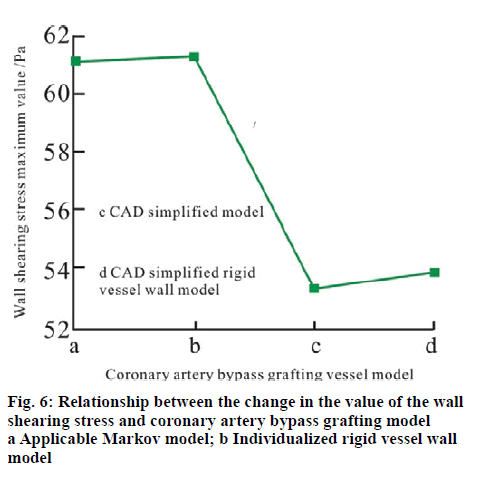 Figure 6: Relationship between the change in the value of the wall shearing stress and coronary artery bypass grafting model
a Applicable Markov model; b Individualized rigid vessel wall model Heart failure is a kind of emergency with sharp decline in myocardial contractility caused by a variety of reasons, which results in a sudden drop in the cardiac output and the failure to meet the needs of the body, leading to congestion in the venous system and insufficiency of blood supply to the arterial system. The symptoms of the disease are serious and the condition is dangerous. Without rescue in a timely manner, the patient’s life is often endangered. In view of the treatment and nursing care for patients with severe heart failure after coronary artery bypass grafting, through the construction and application Markov model method, studies are carried out on the effects of the vascular geometric model and the elastic blood vessel wall on the treatment and nursing care for the patients with severe heart failure after the coronary artery bypass grafting due to the change in the hemodynamic characteristics. Regardless of the elastic wall surface or the rigid wall surface, the maximum wall shearing stress in the CAD simplified model is higher than the results in the application Markov model. In the two kinds of vascular geometric models, the maximum value of the wall shearing stress in the elastic vessel wall model is lower than the results in the rigid vessel wall model. The maximum wall displacement of the Markov model is higher than that in the CAD simplified model. The positions of the maximum wall displacement generated in the two kinds of the vascular geometric models also have very significant difference. The maximum displacement in the application Markov model is present at the bypass graft and the suture area and the range is relatively small; while the maximum displacement in the CAD simplified model is at the bend of the blood vessels. The application Markov model after the individualized coronary artery bypass grafting can reflect the hemodynamic characteristics more truthfully than the CAD simplified model of the relatively rigid wall, which has provided the clinical surgeons with an auxiliary means for the diagnosis of the pathological degree and the site of restenosis after the coronary artery bypass grafting.