Acyclovir, an antiviral is used in the treatment of ocular infections. Acyclovir is effective against human herpes viruses including Herpes simplex virus type 1 and 2, Varicella Zoster virus, Epstein-Barr virus and Cytomegalovirus. Acyclovir is available as a 3%w/w eye ointment to be applied 5 times a day in the eye. The present investigation was aimed at designing a twice a day ocular inserts of acyclovir by melt extrusion technique to improve patient compliance, using hydroxypropylcellulose as a thermoplastic polymer. Also, the developed formulation would overcome the greasy nature of the eye ointment. The developed inserts were stable, non-irritant and provided release of the drug over a period of 10 hours in vitro .

Topical ophthalmic application is considered the preferred way to achieve therapeutic levels of drugs used to treat ocular diseases [1]. The conventional preparations for this route are solutions, suspensions, semisolids like ointments, etc. Bioavailability, particularly for ocular solutions ranges from 1-10% of the total administered dose. This is due in part to the rapid precorneal clearance kinetics resulting from reflex tearing and blinking, where half-life times of instilled isotonic solutions or suspensions approximate only 15 s in humans. The problem associated with the use of ophthalmic ointment is poor patient acceptance [2]. To overcome these problems, various novel ophthalmic delivery systems such as inserts, in situ gels, etc have been investigated in an attempt to extend the ocular residence time of medication for topical application to the eye.

Melt extrusion is a technique in which during extrusion, a polymer melt is pumped through a shaping die and formed into a profile. This profile can be a plate, a film, a tube, or have any shape of its cross section [3]. The process often is referred to as profile or line extrusion in which the shape of the extrudate like a tube is determined by the die. The extruded profile proceeds horizontally to the cutoff equipment, which controls its length. Profiles may be further processed, for example, as in film extrusion, blow molding, or injection molding. In film extrusion, the polymer melt is extruded through a long slit die onto highly polished cooled rolls which form and wind the finished sheet. This is known as cast film [4].

Acyclovir has an in vitro and in vivo inhibitory activity against human herpes viruses including Herpes Simplex virus (HSV) type 1 and 2, Varicella Zoster virus, Epstein→Barr virus and Cytomegalovirus [24]. Acyclovir is available as a 3% w/w eye ointment to be applied 5 times a day in the eye [25]. The objective of the present investigation was to prepare long acting ocular inserts of acyclovir to be placed in the eye twice a day, by melt extrusion technique.

Extrusion of each plain polymer Methocel® A (methylcellulose), Methocel® E and Methocel® K (hydroxypropylmethylcellulose), Klucel® (hydroxypropylcellulose, HPC), Natrosol® (hydroxyethylcellulose) and Starch 1500 were carried out on Melt Flow Rate Apparatus, Model 3/80, Davenport. Extrusion dies of dimensions 1 mm, 1.2 mm and 1.5 mm were tried to afford the product suitable for instillation in the eye. The polymer used for the study was medium viscosity grade Klucel® GFF. The dose of Acyclovir was calculated so that an ocular insert for twice a day use could be fabricated using the technique of melt extrusion. Plasticizers such as propylene glycol, glycerine and polyethylene glycol 400 were tried as they are nonirritant for ocular use and their concentrations were optimised.

Method of preparation of ocular insert

Acyclovir and the polymer were sieved through 60#, weighed and blended geometrically. The plasticizer was added and blended. The blend was then charged to the barrel of Melt Flow Rate apparatus and extruded. The extrudate was cut into appropriate size of 4.5 mm × 1 mm and packed in polyethylene lined aluminium foil (thickness 100 µ), heat sealed and sterilized by gamma radiation (2.5 Mrad for 4 h).

DSC of the selected samples was carried out to study the thermal behaviour under specified conditions. Each sample was heated over the temperature range from ambient to 425° at a heating rate of 10°/min under nitrogen environment (20 ml/min). The instrument used was Perkin Elmer Differential Scanning Calorimeter. Thermograms were integrated using Pyris 6 software.

Ocular irritation studies were performed according to the Draize technique. Assessment of ocular irritation potential of ophthalmic formulations is an extremely important step in the development of ophthalmic formulations. The test has been standardized at the international level, e.g. using the OECD guideline No.40526. Acute eye irritation/corrosion and is the most widely used test for classification and labelling of chemicals according to their ocular safety. Six female rabbits each weighing 2-3 kg were used for the study of the formulations. The sterile formulations were placed twice a day for a period of 21 d and the rabbits were observed periodically for redness, swelling and watering of the eyes.

The in vitro release studies were performed in a modified dissolution apparatus as per USP specification27. The dissolution conditions were: temperature was kept at 37±1°, horizontal amplitude was 3.8 cm and frequency was set at 32 cycles/min. Each insert was tied in muslin cloth and was placed in the test tube containing 10 ml dissolution medium with the help of the hanger, in triplicates. Aliquots were withdrawn at 1, 2, 3, 4, 5, 6, 7, 8, 9 and 10 h. The aliquots were suitably diluted and analysed by spectrophotometrically at 252 nm. The % cumulative release of the drug was computed and graph of % cumulative release vs. time was plotted.

The optimized formulation in its final pack was stored at ambient conditions, 30±2°/65±5% RH and 40±2°/75±5% RH. Sampling was done at 0, 1, 2 and 3 mo and the formulations were evaluated for physical parameters, in vitro release, sterility and drug content.

Melt extrusion offers the advantages of being a single step, simple, continuous process with relatively high throughput rates. It provides the facility of mixing inside the extruder body thus bypassing problem of segregation during premixing. It obviates the need for organic solvents in processing and circumvents associated hazards. Also, it obviates the need for water and hence can work for water sensitive drugs. Also, there is no time consuming drying step involved. The bioavailability of the drug substance could be improved when it is dispersed at the molecular level in hot-melt extruded dosage forms.

Of the various polymers evaluated for melt extrusion, only all grades of Klucel® could be melt extruded. Methocel® A, Methocel® E, Methocel® K, Natrosol® and Starch 1500 could not be melt extruded. Polymers were extruded using different die of diameters 1, 1.2 and 1.5 mm at 122-128°. The compression force required to extrude the polymer was found to be 15 kg for 1.5 mm die diameter and was 21.5 kg for 1 mm and 1.2 mm die diameter, respectively. However, smallest diameter (1 mm) die was chosen for further studies after considering the size of the marketed formulation i.e. Lacrisert® (dimension: 5 mm×1.16 mm). The same die was used for further studies. Acyclovir is available as a 3%w/w ointment to be placed in the eye five times a day as a 1cm ribbon each25. The weight of such 5 ribbons approximates 66 mg of the ointment that contains around 2 mg of acyclovir daily. Hence, it was decided to formulate ocular inserts containing 1 mg of acyclovir for twicedaily use.

Table 1: Selection of plasticizer for extrusion

Table 2: Optimization of concentration of propylene glycol as a plasticizer

Klucel® GFF, Klucel® MFF and Klucel® HF (Table 3) were tried as a matrix for the insert along with propylene glycol (5%w/w) as the plasticizer and the polymer that afforded a desired release profile of more than 90% at the end of 10 h, in an in vitro dissolution study was selected as the optimum formulation. Klucel® HF gave the desired release profile. The results are as depicted in fig. 1. 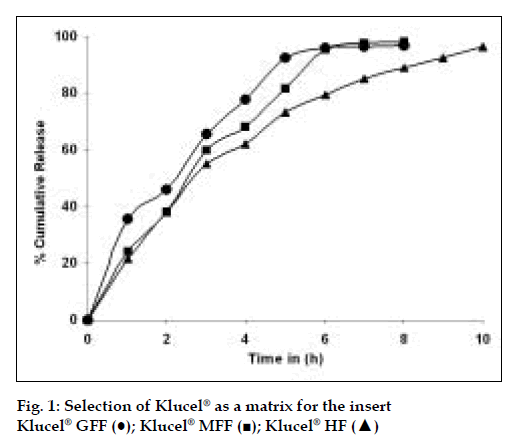 Table 3: Optimization of grade of klucel®

The results of the evaluation of the ocular inserts of acyclovir are as depicted in Table 4. There were no changes in the quality control parameters of the insert before and after sterilization. Similarly, no change was observed in the release kinetics before and after sterilization as depicted in Table 4. The DSC studies confirm that there is no degradation of the drug as evident by the absence of any additional peaks in the DSC Thermograms. As illustrated in fig. 2 the reduction in the peak area of DSC thermogram of insert confirms the partial solubilisation of the drug in the polymer.

Table 4: Evaluation of the inserts 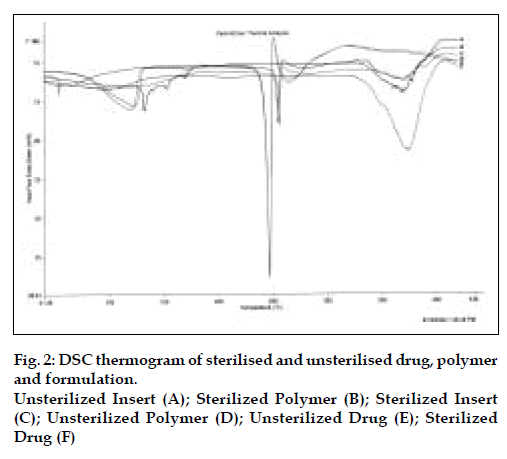 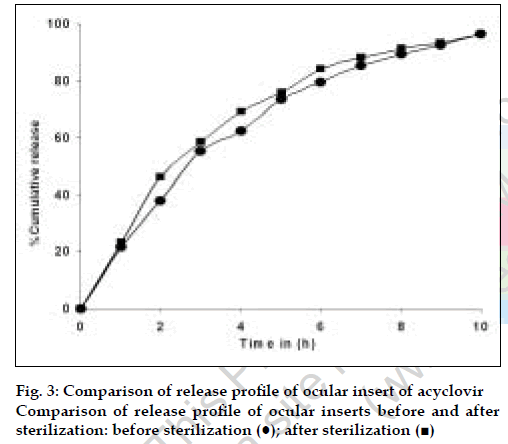 No irritation was observed in the rabbit eye during ocular irritation test. The overall irritation was found to be 4 out of 110 on the scale of scores for reading the severity of ocular lesions given by OECD guidelines no. 40526. It was also observed that after 12 h, the inserts completely dissolved in eye indicating biodegradable nature of the inserts.

The technique of melt extrusion was applied to the fabrication of acyclovir ocular inserts as solid polymeric rods to be placed in the cul-de-sac of the eyes. These inserts were retained in the eye for required period of time and sustained the release of the drug for 10 h. The polymer slowly released the drug via swelling and dissolved slowly in the tear fluid, thus avoiding the need to remove insert after drug administration. Further, the polymer is also non-greasy, thus potentially increasing patient acceptability.

Authors are grateful to UGC for providing junior research fellowship.