A post column derivatization method for the estimation of fat soluble vitamins K2-4 and K2-7 was developed by reverse phase HPLC and validated as per ICH guidelines. The compounds were extracted by solvent extraction with acetone followed by evaporation in a rotary evaporator. The residue was dissolved in ethanol and injected in to a chromatograph consists of C18 column (Waters symmetry, 150×4.6, 3.5 μ) and fluorescence detector. The derivatization reagent was prepared by dissolving 136 mg of zinc chloride, 40 mg of sodium acetate and 0.1 ml of glacial acetic acid in methanol. The mobile phase comprises of methanol: isopropyl alcohol: acetonitrile: zinc chloride buffer solution 850:90:50:10 with a flow rate of 1 ml/min. The overall percentage recovery of five different levels were found to be 99.85 and 100.5%, respectively. The linearity of the analytical method was determined from 10% to 120% level and the linear regression coefficients were 0.9991 and 0.9995 which is well within the acceptance criteria of 0.999. The limits of detection and limits of quantification was determined based on signal to noise ratio.The established values were 0.050, 0.50 μg/ml and 0.005, 0.047 μg/ml which is much lesser than available literatue limits. The developed method can be more suitable for the estimation of K2-4 and K2-7 present in drug substances as well as drug product formulations.

Derivatization reaction with the reduction of zinc metal ions to isolate compounds of closely eluting peaks by chromatography is fast emerging tool for analytical separation. The dosage form formulated with two active ingredients such as K2-4 and K2-7 along with excipients is very challenging effort to separate from its moiety. In order to separate the K series vitamins with almost same structural properties, the post column derivatization technique with fluorescence detection was used. The reduction mechanism of components with zinc chloride derivatization reagent present in mobile phase was interacted with column stationary phase to achieve separation [5-13].

The literature survey for K2-4 and K2-7 reveals that no independent method available for simultaneous and efficient separation of these two vitamins. The present study reveals that nutraceutical formulation with vitamins was chosen to develop analytical separation method using Soxhlet’s extraction with acetone solvent followed by evaporation with a rotary evaporator and fluorescence detection [14-17]. The developed method is precise, linear, accurate, robust and stability indicating compared to other UV detection regular HPLC methods. The method for estimation of K2-4 and K2-7 from its tablets formulation is more reliable for routine analysis. The developed method was validated as per International Conference on Harmonisation (ICH) guidelines [18-20].

Transfer an accurately weighed quantity of 100 mg each of K2-4 (purity 2100 μg/g) and K2-7 (purity 2500 μg/g) in to cotton thimble loosely plugged with cotton and placed it in a Soxhlet’s extractor. The round bottom flask fitted with extractor and water condenser was placed on heating mantle with a temperature controller. The extractor was filled with acetone solvent and carried out the extraction procedure for 30 min at about 70°. This operation was repeated for 2 more times. The extract was collected in a glass beaker and transferred in to a rotary evaporator collection flask for evaporation at 80° under vacuum till to get the residue. The obtained residue was dissolved in ethyl alcohol and transferred quantitatively in to a 50 ml volumetric flask and make up the volume with ethyl alcohol. The prepared solution was filtered through 0.45 μm nylon membrane filter.

The marketed formulation tablets were triturated in to fine powder using mortar and pestle. Transfer an accurately weighed quantity of powdered tablets equivalent to 100 mg each of K2-4 and K2-7 in to cotton thimble loosely plugged with cotton and placed it in a Soxhlet’s extractor. The round bottom flask fitted with extractor and water condenser was placed on heating mantle with a temperature controller. The extractor was filled with acetone solvent and the extraction procedure was carried out for 30 min at about 70°. This operation was repeated for 2 more times. The extract was collected in a glass beaker and transferred in to a rotary evaporator collection flask for evaporation at 80° under vacuum till to get the residue. The obtained residue was dissolved in ethyl alcohol and transferred quantitatively in to a 50 ml volumetric flask and make up the volume with ethyl alcohol. The prepared solution was filtered through 0.45 μm nylon membrane filter.

The quantification method of two pharmaceutical ingredients present in tablet formulation was conducted by HPLC analysis with fluorescence detection. The mobile phase comprises of methanol, isopropyl alcohol, acetonitrile and zinc chloride solution (0.1 M) in the ratio of 850:90:50:10. The pump flow rate of 1 ml/min. Injection volume of 50 μl, auto sample cooler temperature 10°, the excitation wavelength of 248 nm and emission wavelength 430 nm were set as chromatographic conditions. The peaks of interest were separated in an isocratic elution by using Waters symmetry C18 (150×4.6 mm, 3.5 μm) column. K2-4 and K2-7 were reduced by fluorescent derivative present in mobile phase and then detected by florescence at an excitation wavelength of 248 nm and an emission wavelength of 430 nm.

The analytical method was validated as per ICH guidelines. The parameters selected for validation are precision, linearity, accuracy, limits of detection (LOD), limits of quantification (LOQ), robustness and specificity to check for placebo interference.

The linearity of an analytical method was established by plotting calibration curves against concentration versus area response. The calibration curve was generated by prepared stock solution of each pharmaceutical active ingredient in to seven different concentrations (10- 120%) of 0.5, 1.0, 1.5, 2.5, 3.5, 5.0 and 6.0 μg/ml. The linear regression coefficient of each component should be greater than 0.999.

LOD is a qualitative limit which has been established by serial dilution of samples prepared in extraction method till to get the minimum concentration of signal to noise ratio greater than 3.0. The stock solution concentration of 5 μg/ml was prepared by spiking the components with placebo. The determined LOD value for K2-4 and K2-7 were 0.005 and 0.05 μg/ml, respectively.

LOQ is the quantitative limit which has been determined by serial dilution of samples prepared in extraction method till the minimum concentration of signal to noise ratio is greater than 10. The stock solution concentration of 5 μg/ml was prepared by spiking K2-4 and K2-7 with placebo. The determined LOQ values for K2-4 and K2-7 were 0.047 and 0.50 μg/ml, respectively.

The robustness of the method was performed by deliberately modified variations of chromatographic conditions such as flow rate, column temperature, mobile phase ratio and pH of buffer concentrations. The results obtained were compared with method precision results and %RSD is not more than 2%.

The tablet formulation placebo (all the excipients except active components) was prepared and chromatographed with the similar condition as applied for assay determination. The active components (K2-4 and K2-7), blank solution, placebo solution (same concentration as standard solution) were chromatographed and examined for peak interference. The major components peak purity was verified by using diode array detector (DAD).

The post column derivatization method for simultaneous estimation of two vitamins present in tablet formulation by solvent extraction followed by fluorescence detection was developed and validated. The mobile phase comprising of methanol:isopropyl alcohol:acetonitrile:zinc chloride solution (850:90:50:10), at 1 ml flow rate with column temperature 40° was optimised to give better resolved peaks with system suitability parameters for K2-4 and K2-7 (Figure 2). The retention times (RT) for K2-4 and K2-7 were 4.4 and 12.7 min, respectively (Figure 3). In direct sample preparation method the components were not extracted completely from matrix components and hence the recovery for estimation of drug from drug product formulation is not satisfied. But by present study the solvent extraction method was used to recover components completely with suitable precision and accuracy. In order to increase the recovery of components the sample preparation techniques were optimized by running different amount of sample, increasing number of extraction time, temperature and different kinds of solvents. The system suitability conditions such as standard solution RSD, peak asymmetry, resolution between two peaks and theoretical plates were well within the limits of acceptance criterion. Based on the above study extraction methodology was optimised to get more recovery of analytes from matrix components present in tablet formulation. 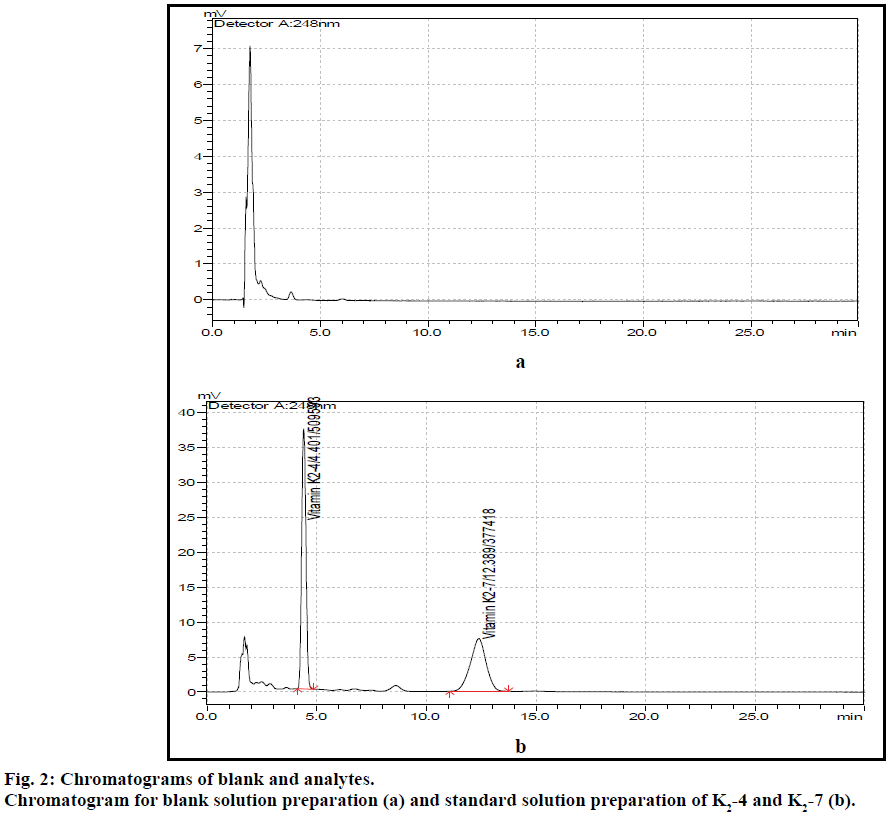 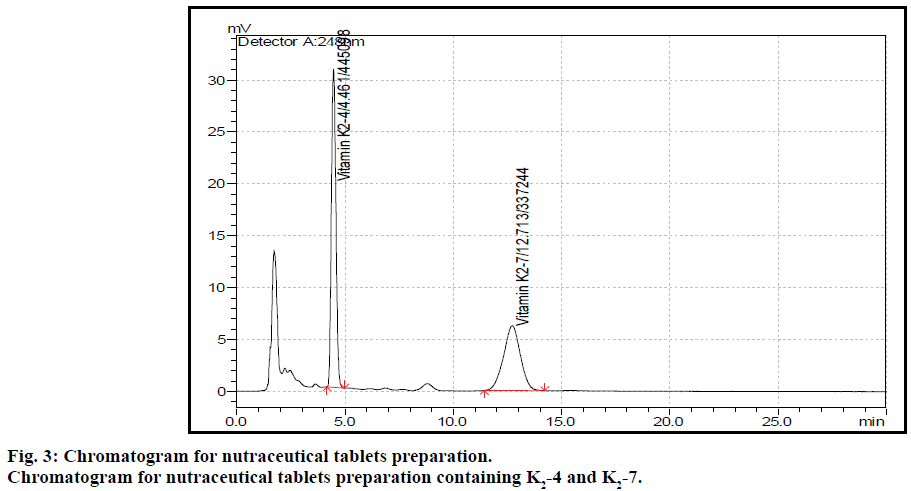 The analyte recovery was performed for 5 different levels from 25 to 200% of working concentration level. The mean recovery obtained for each level is described in Table 2. The overall percentage recovery of all levels were 99.85 and 100.5%. The %RSD were 1.15% and 1.09%, respectively. The extended lower and higher level of recovery concentrations can be justified since it was an extraction procedure. LOD and LOQ was determined based on signal to noise ratio. The determined LOD and LOQ values were 0.005, 0.047 μg/ml and 0.05, 0.500 μg/ml respectively, which is much lesser than available literatue limits. The robustness of method was performed by slightly altering the deliberately modified variations like flow rate, column temperature, mobile phase ratio and buffer pH. The results obtained was compared with method precision results and the RSD between two results is descibed in Table 3. The tablet placebo was prepared by mixing sodium starch glycolate, talc, polyvinyl pyrollidone (PVPK30), magnesium sterate, aerosil, cross carmellose sodium, microcrystalline cellulose powder (MCCP102), hydroxypropyl methylcellulose (HPMC E15), titanium dioxide, polyethylene glycol (PEG 6000), isopropyl alcohol and methylene chloride in proper proportions. The peak purity of two analyte peaks and placebo interference were verfied and found satisfactory results.

The system suitability parameters were described in Table 4. The developed method was found be sensitive and selective for the determination of K2-4 and K2-7 present in combination without any placebo interference. The developed method was applied to the determination of K2-4 and K2-7 in their combined nutraceutical tablet formulation.

Each validation parameter and system suitability was described

The authors thank Department of Chemistry, Sathyabama University, Chennai, for their support to carried out the work successfully. We also thank to Director, Mankind Group of companies, New Delhi, for providing formulation technical support to carry out the work.