The composition of the essential oil of Crassocephalum crepidioides was characterized using retention indices, gas chromatography-mass spectrometry and quantified by gas chromatography-flame ionization detector. Twenty seven components were identified, representing 91.2 % of the total oil. The essential oil of C. crepidioides was dominated by monoterpene hydrocarbons (80.9 %) with β-myrcene (65.9 %), β-phellandrene (8.8 %), α-pinene (3.1 %) and sesquiterpene hydrocarbons (4.8 %) with α-copaene (1.5 %), and α-humulene (1.5 %). Promising essential oil yield with β-myrcene as major component, suggests that crop could be considered for commercial cultivation. The obtained essential oil was tested against human cervical cancer SiHa, human oral epidermal carcinoma KB and human adenocarcinoma Colo-205 cell lines at 48 h, which showed significant results against all cell lines (59.8±3.7, 67.9±0.5 and 84.5±3.6, respectively at 100 µg/ml).

The genus Crassocephalum belongs to Asteraceae family is widely distributed in the tribe Senicioneae and represented by approximately 100 species in Asia, Africa, Australia, Malaysia, China, Nepal and Sri Lanka. Many of these species are widely used as food additives or in traditional medicines [1,2]. Crassocephalum crepidioides commonly known as thickhead or fireweed and used as oriental medicine for the treatment of cut and to cure diarrhoea [3]. C. crepidioides used as a vegetable and was reported to have high nutritional values [4]. The plant parts have been used to treat fever, liver disorders such as hepatitis, indigestion and also as purgative and laxative. It has antioxidant, antiinflammatory, antitumor and antibacterial properties [3-5]. Phytochemical screening of this plant recorded the presence of alkaloids, diterpenes, tannins, coumarins, flavonoids, mucilage, reducing compounds and steroids [1,2,5]. The essential oil of C. crepidioides was earlier reported in literature from Western Ghat region of North West Karnataka, India, elevation 800 m [6].

In continuation of our bioprospection program [7-9], the aim of present study was to carry out chemical composition analysis and cytotoxic activity of the flowering aerial part essential oil of C. crepidioides growing in the Western Himalayan region (1372 m, asl). To the best of our knowledge, this is the first report on the chemical composition and cytotoxic activity of the essential oil from this plant growing in western Himalayan region of Himachal Pradesh, India.

Fresh plant material of C. crepidioides was collected from the farm land of CSIR-IHBT (India, elevation 1372 m) situated in the Western Himalaya. Plant material was characterized by the taxonomist of the institute and a voucher specimen deposited at CSIRIHBT Herbarium, Palampur, India (voucher no. PLP_17618; Figure 1). Fresh plant material (3.2 kg) of C. crepidioides was hydrodistilled for 3 h to obtain essential oil using Clevenger type apparatus. The hydrodistillation was performed in triplicate with the help of 5000 ml heating mantle, 5000 ml round bottom flask and a condenser. The obtained essential oil was dried over anhydrous sodium sulphate and stored at low temperature until used for gas chromatography/gas chromatographymass spectrometry (GC/GC-MS) analyses.

Analysis of the composition of the essential oil was carried out with the help of a GC on Shimadzu GC 2010 equipped with DB-5 (J and W Scientific, Folsom, CA, USA) fused silica capillary column (30×0.25 mm id, 0.25 μm film thickness) and a flame ionization detector. The GC oven temperature program used was as follows, 70° (initial temperature) held for 4 min, increased at a rate of 4°/min to 220° and held for 5 min. Injector temperature 240°, detector temperature 260°, injection mode, split. Carrier gas was nitrogen at column flow rate of 1.05 ml/min (100 kPa). The GC oven temperature was 70° for 4 min and then to 220° at 4°/min and held for 5 min. Injector temperature, 240°; interface temperature, 250°; acquisition mass range, 800-50 amu; ionisation energy, 70 eV. Helium was used as carrier gas.

All individual essential oil constituents were identified on the basis of their GC retention indices (RI) determined using homologous series of n-alkanes (C9-C21) on the DB-5 capillary column and using library search of National Institute of Standards and Technology database [10] as well as by comparing their mass spectral fragmentation pattern with those reported in literature [11]. Identification of major components were also confirmed by 13C nuclear magnetic resonance (NMR) spectra by comparing with literature [12,13].

The cells were trypsinised and washed twice with phosphate-buffered saline and incubated at a density of 2×104 cells/well in flat-bottom 96-well plates in 100 μl of complete medium. Several concentrations (10, 25, 50 and 100 μg/ml) of oil in 100 μl complete medium were added. Vinblastine (1 μM) was used as positive control, whereas cells alone supplemented with complete medium were used as negative control. Plates were incubated at 37° for 48 h in a CO2 incubator. After incubation period, 50 μl of 50 % trichloroacetic acid (Merck) was added and plates were incubated at 4° for 1 h. The plates were flicked and washed five times with water and then air-dried. Subsequently, 100 μl of the SRB solution in 1 % glacial acetic acid was added and incubated for 30 min at room temperature. After incubation, plates were washed five times with 1 % acetic acid, air dried and 10 mM Tris base (Sigma Aldrich, India), was added. The absorbance was measured using microplate reader (BioTeK Synergy H1 Hybrid Reader) at 540 nm wavelength [16].

Hydrodistillation of oil was carried out in the laboratory using Clevenger apparatus. The sample afforded essential oil with pale yellow colour and a characteristic fragrance (yield was 0.02 %; mfb is 0.14 %). The essential oil was characterized by GCMS and quantified by GC (Figure 2). Twenty seven constituents were identified representing 91.2 % of the total oil. The major constituents were β-myrcene (65.9 %), α-pinene (3.1 %), cryptone (2.0 %), limonene (1.7 %), sabinene (0.3 %), α-copaene (1.5 %), α-humulene (1.5 %) and β-phellandrene (8.8 %). The presence of β-myrcene is also confirmed by 13C NMR. β-myrcene and β-phellandrene were found to be the main constituents from this plant. Moreover the list of essential oil components is documented in Table 1. Earlier reports on essential oil composition of different parts (roots, flowers and aerial parts) of C. crepidioides collected from Western Ghats region of India showed that flowers and aerial parts were dominated by monoterpene hydrocarbons with myrcene and β-phellandrene as major constituents. The other constituents in flower oil were dauca-5,8-diene (6.9 %), trans-β-farnesene (4.8 %), daucene (3.6 %), allo-aromadendrene (4.9 %), α-muurolene (2.6 %) and β-panasinsene (2.4 %) [6]. The roots oil of C. crepidioides dominated by sesquiterpene hydrocarbons. The main constituents analysed were (E)-β-farnesene (30.6 %), α-humulene (10.3 %), β-caryophyllene (7.2 %), cis- β-guaiene (6.1 %) and α-bulnesene (5.3 %) [18]. In our study done on flowering aerial parts from western Himalaya, the major allo-aromadendrene, α-muurolene, β-panasinsene, cis-β-guaiene and α-bulnesene were absent. However, β-myrcene and β-phellandrene were found in high concentration. Differences in chemical constituents might occur due to climate, temperature and altitudinal variations. Both major compounds found in this study were extensively studied and reported to be pharmacologically active. β-myrcene is a monoterpene hydrocarbon and reported to possess diverse bioactivities such as antiulcer [19], antimicrobial, antioxidant [20], insect repellent [21], useful for improving flavour of healthcare foods and beverages [22]. Moreover, β-myrcene demonstrated as antiinvasive effect against MDA-MB-231 human breast cancer cells. Also β-myrcene was reported to inhibit tumor necrosis factor-α (TNF-α)-induced nuclear factor-κB (NF-κB) activity. Pretreatment with β-myrcene supressed TNF-α-induced phosphorylation of inhibitor of κB kinase and NF-κB as well as matrix metalloproteinase -9 gene expression in a dose-dependent manner [23]. The second major monoterpene hydrocarbon β-phellandrene also exhibited cytotoxic effect against human breast cancer cell lines. Chemical composition of essential oils (including β-phellandrene) of Schinus terebinthifolius Raddi and Schinus molle L. berries showed antioxidant and anticancer activity against human breast cancer cell lines (IC50=47+/-9 mg/l, IC50=5+/-10 mg/l, respectively) [24]. Therefore, the literature indicated that both β-myrcene and β-phellandrene to be cytotoxic. Hence the anticancer activity of C. crepidioides against three human cell lines (SiHa, KB and Colo-205) was investigated. In the present study, essential oil of C. crepidioides showed activity against SiHa cells at 50 and 100 μg/ml (54.9±0.8 and 59.8±3.7 %, respectively) with IC50 value of 45.9 μg/ml. However, it showed significant activity on KB cells (67.9±0.5 %) at 100 μg/ml with IC50 value of 70.4 μg/ml. In case of Colo-205 cells, it was activity at 100 μg/ml (84.5± 3.6 %) with IC50 value of 41.0 μg/ml (Table 2). The IC50 values of C. crepidioides oil ranged between 41.0 to 70.4 μg/ml. In literature, extract of C. crepidioides showed good anticancer activity and delayed tumor growth in S-180-bearing mice. However, it did not inhibit S-180 cell growth in vitro [3]. C. crepidioides at a concentration of 100 μg/ml was non-toxic against MRC-5 and HepG2 cell lines. At the concentration of 25 μg/ml it produced 69.47 % cytoprotection [25]. C. crepidioides oil exhibited cytotoxic activity at higher concentrations on all the cells, which varied in a concentration-dependent manner. It can be concluded that essential oil of C. crepidioides could further be explored in vivo as a potential an anticancer agent.

Table 2: In vitro cytotoxicity against SiHa, KB and COLO-205 cells by SRB assay 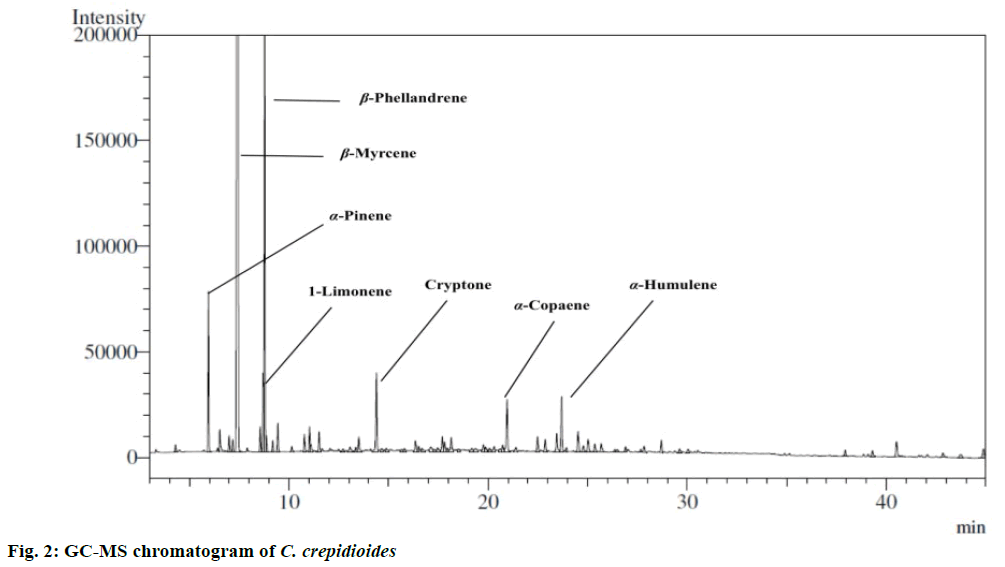 In conclusion, these results showed that C. crepidioides to be a rich source of monoterpene hydrocarbons, it contained β-myrcene and β-phellandrene as major constituents. In recent years, natural compounds and extracts had been shown active against cancer and adopted frequently for the prevention of carcinogenesis. Also presence of medicinally-active β-myrcene and β-phellandrene in air will make a clean environment [26]. As discussed above based on the results obtained, it could be concluded that C. crepidioides essential oil needs to be investigated for detailed anticancer activity and since the essential oil yield is good, it possesses scope of utilization for improving flavour of healthcare foods and beverages as well.