Withaferin A from cell cultures of Withania somnifera

Withania somnifera Dunal, an erect evergreen shrub, commonly called Ashwagandha (Sanskrit), grows throughout India, Pakistan and Italy. The plant contains a group of compounds known as withanolides. There is a significant variation in the withanolide expressed from plants grown in different geographical areas. Withanolides are naturally occurring steroids built on ergostane skeleton, in which C-22 and C-26 are appropriately oxidized to form a d-lactone ring. Withaferin A has antibacterial, anti-tumor, anti-inflammatory and immunomodulatory properties [1].

Laboratory scale studies for optimization of plant cell suspension culture conditions is usually performed in glass shake flasks. Six-well polystyrene plates have been used for mammalian and insect cell culture for several years; this technology has very limited application in the culturing of plant cells [6-7]. Srinivasan et al. [8] reported the combined use of six-well plates and TLC for rapid screening of Taxus sp cell suspension cultures for taxane production. Their studies revealed that six-well plates were superior to shake flasks for rapidly predicting which conditions may be most effective for growth and product formation. This communication reports the establishment of suspension cultures of Withania somnifera capable of production of Withaferin A and the use of six well plates to test various elicitors for enhancement of product formation.

The seeds of Withania somnifera were washed thoroughly with water and allowed to germinate aseptically on 3% sucrose-agar medium. The seeds germinated after 3 w. The hypocotyl portions of 3-w old seedlings were aseptically transferred onto MS medium9 containing 3% sucrose plus 2,4-D (1 mg/l) plus kinetin (0.2 mg/l). The callus induction was observed after 5 d and callus was sufficiently well formed by 3 w so that it could be transferred. The callus was maintained by subculturing onto the half strength B5 medium10 with 3% sucrose plus dicamba (2 mg/l) plus kinetin (1 mg/l) at 4 w intervals.

The suspension cultures were initiated by transferring 10% w/v of callus into half strength B5 medium supplemented with dicamba (2 mg/l), kinetin (1 mg/l) and glutamine (292 mg/l) and incubated at 25±2° at 120 rpm. After one week the cultures were filtered aseptically through a 100 size sieve to remove large cells. The uniform suspension was filtered through Buchner funnel and transferred to fresh medium using an inoculum of 5% w/v and cultures were maintained by subculturing at 1 w intervals.

The cell cultures were filtered aseptically through a Buchner funnel with vacuum and washed with medium. Then the cells were transferred to production medium, ¼ B5 medium supplemented with 2,4-D (2 mg/l), zeatin (0.5 mg/l) and sucrose (5% w/v) in six-well plates or shake flask in 20% w/w inoculum and incubated for 2 w.

The solutions of elicitors were prepared by dissolving in a suitable solvent and added to the cultures before incubation. The elicitors used were: salacin dissolved in water; methyl jasmonate and arachidonic acid dissolved in ethanol.

Extraction of withaferin A

Cell culture samples were first filtered to obtain a cell fraction and cell-free filtrate. The cell mass was weighed to determine fresh weight. Cells were then frozen and thawed and then extracted three times with three volumes of dichloromethane. The combined dichloromethane extract was evaporated and the residue was dissolved in methanol and saved for analysis.

The methanolic extract was analyzed by using pre-coated silica gel plates of 250 μm layer, UV 254 (Whatman Ltd, Maidstone, Kent, England) by co-chromatography with authentic sample of withaferin A. The plates were developed in a solvent system of chloroform: methanol (95:5) and detected using a vanillin-sulfuric acid reagent [11].

The HPLC analysis of extracts was carried out by Phyton Inc, USA. The conditions of the analysis includes, gradient method with water with 0.1% TFA (tri-fluoro acetic acid) in Pump A, recovered acetonitrile (86%, 14% water) with a 0.1% TFA in pump B, with a column of Waters delta pack C-18, 150x4.6 mm, 4 μm with a guard column. The flow rate of mobile phase was 0.85 ml/min.

The growth index (GI) after 7 d was 1.8 (five independent wells or n=5) for six well plates and 2.2 (n=3) for flask cultures. The growth index is the final dry weight divided by the initial dry weight. The value of GI changed little after day 7 (measured at day 10, day 15 and day 20 in replicate experiments) and was always in the range of 1.8 to 2.2. Thus, on growth medium the doubling time was approximately 7 d or less.

The kinetic pattern for production of withaferin A is shown in fig. 1. Measurements from four independent cultures were made at each time point. Total withaferin A is reported. The cellular fraction was about 60% of the total withaferin A with the remainder being in the medium. The maximum value observed was 2.6±0.35 mg/l on day 7 in the 6 well plate system. With the flasks the maximum value 1.07±0.52 mg/l was also observed on day
7. In both cases the values of withaferin A decreased at day 10 and 15. These data demonstrate that the same production trend is observed in both methods of culture confirming the suitability of 6-well plate cultures for use in evaluating secondary metabolite production in plant cell suspension cultures. 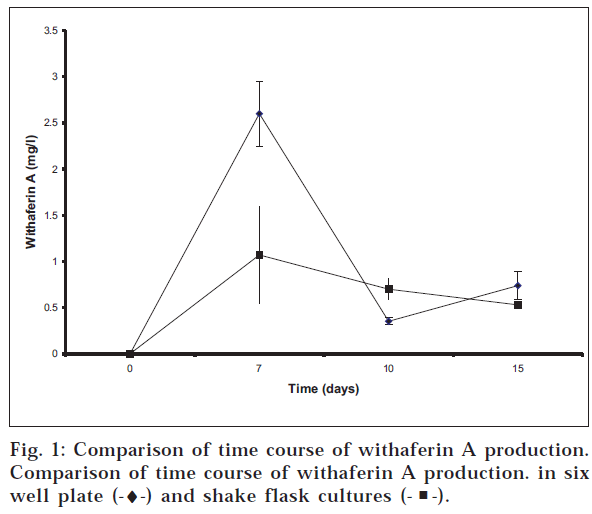 Fig 1: Comparison of time course of withaferin A production. 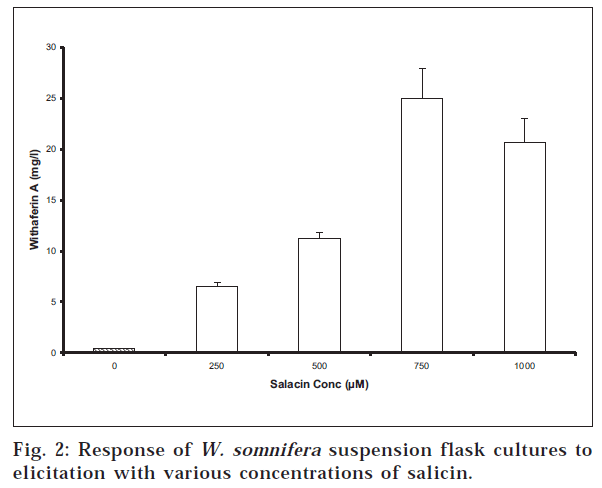