The present study was aimed to evaluate the wound healing activity of extract of tuber parts of Cyperus rotundus . It is a well-known plant in Indian traditional medicine. On the basis of traditional use and literature references, this plant was selected for evaluation of wound healing potential. An alcoholic extract of tuber parts of Cyperus rotundus was examined for wound healing activity in the form of ointment in three types of wound models on rats: the excision, the incision and dead space wound model. The extract ointments showed considerable difference in response in all the above said wound models as comparable to those of a standard drug nitrofurazone ointment (0.2% w/w NFZ) in terms of wound contracting ability, wound closure time and tensile strength.

Wound may be defined as a loss or breaking of cellular and anatomic or functional continuity of living tissue [1]. Wound healing is a complex phenomenon involving a number of processes, including induction of an acute inflammatory process, regeneration of parenchymal inflammatory process [2], migration and proliferation of both parenchymal and connective tissue cells, synthesis of extracellular matrix (ECM) proteins, remodelling of connective tissue and parenchymal components, and acquisition of wound strength [3]. All these steps are orchestrated in a controlled manner by a variety of cytokines including growth factors [4]. Some of these growth factors like platelet-derived growth factor B (PDGF), transforming growth factor B (TGF-B), fibroblast growth factor (FGF) and epidermal growth factor (EGF) have been identified in self-healing wounds2. In chronic wounds, the normal healing process is disrupted due to some unknown reasons, and in such cases, exogenous application of certain growth-promoting agents or compounds which can enhance the in situ generation of these growth factors is required to augment the healing process. Several factors delay or reduce wound healing, including bacterial infection, necrotic tissue, interference with blood supply, lymphatic blockage and diabetes mellitus. Generally if the above factors could be inhibited/controlled by any agent, increasing healing rate could be achieved [5].

Fresh rhizomes of Cyperus rotundus Linn. were collected from Namakkal District, Tamilnadu, during the months of May-June 2003. The identity of the tubers has been confirmed by using all official monographic specifications [14]. Tubers were dried under shade, pulverised by a mechanical grinder and passed through a 40 mesh and then stored in a well-closed container for further use.

The powdered tubers (500 g) were extracted with ethanol (90% w/v) for 24 h using a Soxhlet extractor. This ethanol extract was concentrated to dryness under reduced pressure and controlled temperature (50-60o) to yield solid masses that were completely free from solvents (12.3%). The different concentrations (0.5, 1 and 2% w/w) of extract ointment were prepared using simple ointment base BP [15].

Male Wistar rats (150-180 g) were selected for the present investigation. The animals were maintained at a wellventilated, temperature-controlled (30±1o) animal room for 7 d prior to the experimental period. The animals were provided with food and water ad libitum. The animals were divided into six groups of six rats each as follows: Group I rats were treated with simple ointment base (control). Group-II rats were treated with a reference standard 0.2% w/w nitrofurazone (NFZ) ointment. Group III, IV and V rats were treated with 0.5, 1 and 2% w/w of extract ointments respectively. The extract ointments (0.5, 1 and 2% w/w) at a quantity of 0.5 g were applied once daily to treat different groups of animals. The simple ointment base and 0.2% w/w NFZ ointment were applied in the same quantity to serve as control and standard respectively. Before performing these experiments, ethical clearance was obtained from Institutional Animal Ethics Committee (CPCSEA Registration No. 418).

In the excision wound model [16-18], the full-thickness excision wounds were made on the rats by removing a 500 mm2 piece of skin from the depilated backs after being anaesthetized with anaesthetic ether by the open-mask method. After skin excision, the wound was left open to the environment. Male Wistar rats (150-180 g) were used in this study and worked-up as above. The groups were treated in the same manner as mentioned in the animal experimentation. Wound healing potential was monitored by wound contraction and wound closure time (Table 1). Wound contraction was calculated as percentage reduction in wound area (Fig.1). The progressive changes in wound area were monitored planimetrically by tracing the wound margin on graph paper on wounding day, followed by 6th, 12th and 18th day.

For the incision wound model [19-21], the animals in each group were anaesthetized with anaesthetic ether, and two paravertebral long incisions of 6 cm length were made through the skin and cutaneous muscles at a distance of about 1.5 cm from the midline on each side of the depilated back of the rats. After the incision was made, the parted skin was kept together and stitched at 0.5 cm intervals continuously and tightly using surgical thread (No. 000) and a curved needle (No.11). All the groups were treated in the same manner as mentioned in the case of excision wound model. Extract ointments, simple ointment base (control), and standard drug were applied once daily for 9 d. When the wounds were cured thoroughly, the sutures were removed on day 9 and the tensile strength of the healed wound was measured on day 10 by continuous and constant water flow technique by the method of Lee (Table 1) [22,23].

Physical changes in the granuloma tissue were studied in this model. Under light ether anaesthesia, in the rats, subcutaneous dead space wounds were inflicted in the region of the axilla and groin by making a pouch through a small nick in the skin. [24] Granuloma formation was induced by implanting grass piths in those regions. Cylindrical grass pith measuring 2.5 cm in length and 0.3 cm in diameter was introduced into the pouch. The wounds were sutured and mopped with alcoholic swabs. Animals were placed into their individual cages after recovery from anaesthesia. Excision of the granulomas from the surrounding tissues were performed on the 10th post-wounding day under light ether anaesthesia. Granuloma surrounding the grass piths were excised and slit open. The tensile strength of the piece measuring about 15 mm in length and 8 mm in width (obtained by trimming the rectangular strip of granuloma tissue) was determined on the 10th post-wounding day by adopting continuous water flow technique of Lee [22,23]. The buffer extract of the wet granuloma tissue was used for the determination of tensile strength [25]. The results are expressed as mean±SEM and statistical significance was evaluated zby using Student’s t test Vs control group. P<0.001 implies significance [26].

The effect of extract ointments, NFZ ointment (standard) and simple ointment base (control) in the excision wound model and in the incision wound model were assessed by measuring the wound area and tensile strength respectively. The data including wound area (mm2) and tensile strength of healed wound was furnished in Table 1. The present investigation revealed that the test extract in varying concentrations in the ointment base were capable of producing significant wound healing activity on both wound models. The entire test extract ointments used in excision wound model showed significant wound healing effect on days 12 and 18. The results in Table 1 indicate that out of the three extract ointments used in the experiment, ointment prepared with 2% w/w of alcoholic extract of Cyperus rotundus has been found to have relatively more wound healing activity with 100% of wound closure on day 18 as compared to the standard NFZ. A considerable difference in response between the two extract ointments (0.5 and 1% w/w) was noted on wound closure. The percentage wound contraction is shown in Fig.1. In the incision wound studies, there was a significant increase in tensile strength on day 10 due to treatment with either the extract ointments or the standard NFZ when compared to control. The effect produced by the NFZ ointment (0.2% w/w) application was found to be same as that obtained with the application of the extract ointment (2% w/w) (Table 1). 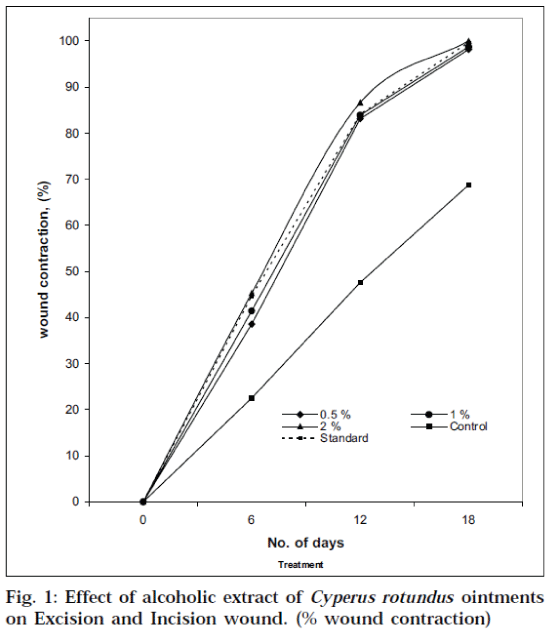 The results of dead space wound model are given in Table 2. The tensile strengths of the granuloma tissues were determined by water-flow technique of Lee [22,23]. Extract ointment (1% w/w and 2% w/w) were found to enhance the tensile strength as compared to the control group (P<0.001). The relative distribution of cells, collagen fibres and vessels in different parts of the 10-day-old granulation tissue in inner and outer zone of control group, 1% and 2% w/w extract ointment is shown in Fig. 2-5, respectively. In this wound model, the increase in tensile strength of treated wound may be due to increase in collagen concentration/unit area and stabilisation of the fibres [27]. This plant is previously reported to possess antiinflammatory activity and used in spreading ulcers. The process of wound healing occurs in four phases: (i) coagulation, which prevents blood loss, (ii) inflammation and debridement of wound, (iii) repair, including cellular proliferation, and (iv) tissue remodelling and collagen deposition [28]. Any agent that accelerates the above process is a promoter of wound healing, due to the presence of active terpenes [29], flavonol glycosides [30,31] and β-sitosterol in tuber part of Cyperus rotundus. This may be effective in reducing tissue swelling, and oozing of tissue fluids accompanying inflammation revealed a positive healing profile.

The wound healing property of Cyperus rotundus appears to be due to the presence of its active principles, which accelerates the healing process and confers breaking strength to the healed wound. On the basis of the results obtained in the present investigation, it is possible to conclude that the ointment of the extract of Cyperus rotundus has significant wound healing activity at all the doses tested.